The Definitive Guide to Wine 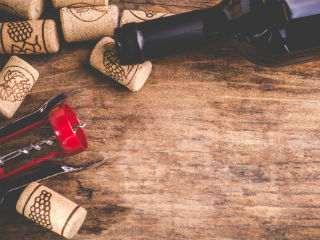 For years, wine was my stress reliever at the end of a long day. Having given up grains and grain-based beverages over a decade ago, I swapped beer for wine. It was my frequent dinner companion. Grilled grass-fed ribeye wasn’t grilled grass-fed ribeye without a glass of California Cab. And then I suspected my 1-2 glass a night habit was impairing my gut health and affecting my sleep. I ran a quick experiment, determined that the nightly wine indeed was having bad effects, and stopped drinking altogether.

It worked. My gut health and sleep improved. Yet I still missed wine. I missed pitting the crunch of an aged Gouda’s tyrosine crystals against a big red, lingering over a glass with an old friend, clinking glasses, giving toasts. I missed what Hemingway called “one of the most civilized things in the world and one of the most natural things in the world that has been brought to the greatest perfection.” But I didn’t miss the poor sleep and gut disturbances.

Then I met Todd White of Dry Farm Wines at the Bulletproof Conference. He introduced me to “natural wines” which use organic, dry-farmed grapes, interesting varietals, and ancient, low-input fermentation methods to produce lower-alcohol wines with greater complexity and fewer adulterants than mass-market wines. When I drank some of the wines Todd suggested, I experienced none of the gut or sleep disturbances. Wine was back.

Still, I was cowed. I’d been guilty of doing what I’ve always recommended against: blindly accepting wine without doing due diligence.

So let’s do that due diligence today. What’s so good about wine?

In a word: polyphenols.

I’ve spoken at length about polyphenols, the colorful plant compounds that reduce inflammation, prevent oxidation, and provoke beneficial hormetic responses from our bodies. Grapes are already rich in polyphenols, and the fermentation process creates even more.

Red wine is far higher in polyphenols than white wine, as most of them reside in the skin pigments. So much that red wine extract protects lipids against against oxidative damage, while white wine extract does not.

You can make white wine more like red by letting the skins steep awhile before removing them and adding more alcohol, which increases polyphenol extraction, but most white wine is far lower in polyphenols. That’s okay—”lower” isn’t zero and the alcohol itself has some benefit in low doses—and shouldn’t prevent you from enjoying white wine. If you want to try a red-esque white, go for something like this “skin ferment” Roussanne.

But red wine is undoubtedly more polyphenol-dense. If many of the health benefits associated with wine consumption come from the polyphenols, red wine is the clearly superior choice.

What are the health effects of wine consumption—positive and negative?

A vast amount of observational evidence suggests that wine consumption is good for us. These types of studies cannot establish causality, but plausible mechanisms exist which strengthen the associations.

Stroke: Wine consumption is linked to a lower risk of ischemic stroke.

Diabetes: Light or moderate wine consumption is linked to a lower risk of type 2 diabetes.

What do interventional studies show?

Red wine can even inhibit the postprandial oxidative damage to blood lipids and inflammatory gene expression you get after a trip to McDonald’s.

And as I’ve mentioned before, these anti-oxidative effects extend to cooking with wine. Using wine in a marinade or braise reduces the formation of carcinogenic compounds and inhibits oxidation of fats in the food.

One study compared grape extract to red wine made with the same types of grapes, finding that red wine provided benefits the grape extract did not. The researchers suggest this was wholly due to the alcohol content, but I think they’re overlooking the importance of the unique polyphenols that form during wine fermentation.

One way to see how wine affects people is the “initiation of red wine drinking” study. They take people who hadn’t been drinking wine, have them “initiate” wine drinking, and follow them and their biomarkers for several months.

Blood pressure: In people with (but not without) a genetic propensity toward efficient or “fast” alcohol metabolism, drinking red wine at dinner seems to lower blood pressure.

Type 2 diabetics: Type 2 diabetics who initiate red wine drinking at dinner see reduced signs of metabolic syndrome, including moderately improved glycemic control and blood lipids. Another benefit that surprised me was the improvement in sleep quality compared to the “just water” group. Another study found that while initiating red wine consumption while dieting doesn’t improve fat loss, it also doesn’t hinder it for type 2 diabetics.

The alcohol is the major problem. Ethanol is a poison. Let’s just face it. Alcohol:

Damages your liver. Alcohol puts your liver through a lot of stress. Full blown cirrhosis of the liver takes a long time and a lot of liquor to reach, but smaller amounts can still do damage.

Gives hangovers. Nothing worse than feeling depressed, anxious, confused, and sleepy with a massive headache while trying to piece together what happened the night before.

Can be addictive. According to this study, alcohol is less addictive than nicotine, crystal meth, and crack, but more addictive than heroin, intranasal amphetamine, cocaine, and caffeine. Most people who drink don’t develop it, but alcohol dependence is a real problem for those vulnerable to it. Nothing should own you.

Is linked to depression. While moderate drinking is linked to a reduced risk of depression, higher intakes may increase the risk.

Those are dangers of alcohol in general. Wine may mitigate some of the risks, but high intakes of even the most polyphenol-rich wine won’t negate the damage of all that ethanol.

Wine is usually healthier than other types of liquor, but there are some unique components that may give you trouble.

Pesticides. Being delectable little balls of sugar water that pests can’t resist, grapes use a lot of pesticides. In France for example, wine grapes account for 3.7%  of the nation’s agricultural acreage but 20% of the pesticides used. A recent study found that the majority of French wines tested had detectable (under 10 ppm) and/or measurable (over 10 ppm) levels of pesticides. Organic wines and wines from certain regions (Cotes du Rhone, Languedoc) had lower levels than other regions.

But pesticides are used in every wine industry. You can usually snoop around and find pesticide use data by county, city, state, and country. You can’t really glean much actionable info from this data, but the point is clear: wine growers use pesticides.

Does it even matter? These are relatively minute amounts of pesticides.

While we don’t have many quality studies on pesticides in wine, I always err on the side of “fewer pesticides are better.” Call me a Luddite. Call me anti-science.

Maybe it’s not even the lack of pesticides that do it; it could be any number of things, including the lower alcohol content, the lack of other chemical inputs, the increased polyphenol content from not over-watering the grape.

How can we maximize the benefits and minimize the negatives?

Water your wine. The Greeks and Romans added water to their wine in a 2:1 or 3:1 ratio, considering those who drank it undiluted to be barbarians. While the barbarians eventually triumphed, diluting one’s wine is an easy way to stave off dehydration, and even improve flavor. I prefer using sparkling mineral water, specifically Gerolsteiner (a German brand with high calcium and magnesium content). Yes, even with red.

Drink it with food. Wine is meant to be consumed with food. Not only does drinking wine with food improve your sensory experience of both and reduce postprandial oxidative stress, having food in your stomach slows alcohol absorption and gives your body more time to deal with it.

Drink it with tea. Fortifying alcoholic drinks with tea upregulated antioxidant production and protected binge-drinking mice from liver injury. If you go to one of those bespoke cocktail bars tended by guys in suspenders and mustaches, you’ll probably find a tea-based cocktail (for $16).

Know your genetic risk. Some genetic variants speed up alcohol metabolism, while others slow it down. A common variant in East Asian populations inhibits the detoxification of acetaldehyde, a toxic metabolite of ethanol; people with this variant who drink alcohol are more likely to get bad hangovers, experience negative symptoms, and even develop certain cancers. If you don’t have your genetic data handy, the presence of “flushing” when you drink alcohol is a good indicator that you have a deleterious variant. Alcohol addiction is often hereditary, too, so exercise caution if you have a family history of alcoholism.

Drink “natural” wines. Watch for these terms: natural, organic, biodynamic, dry-farmed, low-sulfite. They all indicate less human input and a greater expression of the grape’s grapeness. Coincidentally, these types of wines are often the most interesting. I personally drink Dry Farm Wines, since they meet all of these specifications. If you’re a wine drinker and want a steady supply, I recommend them as a go-to.

Gird your liver. If you’re going to drink enough to feel the effects, preparing your liver can assist alcohol detoxification and even prevent a hangover. Staying away from omega-6 fatty acids (saturated and monounsaturated fats can prevent ethanol-induced liver damage), eating polyphenol rich foods (ginger, turmeric, and dark chocolate are all excellent), eating some collagen (glycine helps form glutathione), taking NAC (NAC helps form glutathione), exercising, and getting good sleep the day of your drinking session are all integral parts of any effective alcohol prehab program.

Wine can be a beautiful thing. Moderate consumption (1-2 glasses a day) appears to reduce the risk of certain diseases, and it almost certainly makes a given meal healthier and less inflammatory. Is it necessary? No. If you don’t like wine, should you pick up a habit? Absolutely not.

But as long as you’re not experiencing direct negative effects (bad sleep, gut health, headaches, hangovers, a glass or two of the good stuff several times a week is probably fine, and possibly good for you.

What’s your favorite wine? How has it impacted your life?