Does Coffee Break a Fast? 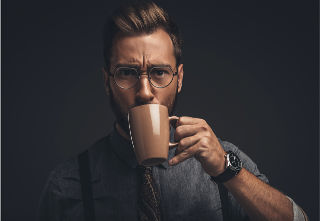 This has got to be one of the most frequent questions I see: “Does coffee break a fast?”

To begin with, I’ll make the case that you shouldn’t worry too much about this stuff. That you’re even willing and able to go without a meal or snack for 12-24 hours places you in rarefied company. That’s 95th percentile stuff. You’re ahead of the game simply by being open to the idea of not eating every hour. Take heart in that. Some coffee with cream midway through doesn’t take away from what you’re accomplishing.

But I know you guys, and I know you love the minutiae. I know it because I love it, too. It’s fun, even if it gets us into trouble sometimes. So let’s dig right in.

Let’s look at some of the most common benefits first and if/how coffee affects them.

Fasting is a quick and easy (or simple) way to get into ketosis. You have little choice in the matter. Since you’re not eating anything, and your body requires energy, you break down body fat for energy. And because you’ve only got fat “coming in,” you’ll quickly start generating ketone bodies. If coffee stops ketosis, it’s probably breaking the fast.

Cellular cleanup. Pruning. Entropy dictates that all things are constantly speeding toward disorder. Things fall apart, in other words. That applies to our cells and the tissues they comprise, too. But because we are biological beings rather than inert objects, we can respond to and resist the descent into disorder. Autophagy is one of the ways in which we keep our cells healthy and maintained, pruned, and trimmed of damaged bits. Fasting is one of the best ways to induce autophagy. It’s one of fasting’s major selling points. If coffee destroys autophagy, that’d be a big mark against coffee and a sure sign it’s breaking the fast.

Good thing coffee doesn’t appear to hamper autophagy. At least in mice, both caffeinated and decaffeinated coffee induce autophagy in the liver, muscle tissue, and heart.

Adenosine monophosphate-activated protein kinase, or AMPK, is an enzyme that inhibits fat storage and promotes fat burning. It activates antioxidant networks, triggers autophagy, and promotes mitochondrial biogenesis. A major benefit of fasting is that it causes a big uptick in AMPK activation. Other things do, too, like exercise, basic calorie restriction, and any situation where energy is being deprived or expended, but fasting is one of the more reliable paths.

Okay, so black coffee doesn’t seem to break the fast in any meaningful sense. What about all the things people like to add to coffee?

Common Additions to Coffee: Does Coffee With Milk and Sweetener Break a Fast?

Does coffee with pure fat break a fast? Technically, it breaks the fast. You’re ingesting calories (depending on how much fat you add, it could be a significant number of calories), and calories break the fast. But pure fat has little to no effect on insulin, blood glucose, or any of the other measurements that indicate a “broken fast.”

It will help you fast longer. Adding a little fat to your coffee can make fasting more tolerable. If you can only manage 12 hours on black coffee but a couple teaspoons of coconut oil help you go 24, the coconut oil might be a good addition.

An ounce of cream has almost a gram each of carbohydrate (lactose) and protein. That. Some cream in your coffee won’t affect your fat burning very much, but it probably will inhibit some autophagy.

That said, remember that ketogenic diets increase autophagy too, and those definitely include food. This is all a matter of degree. It’s not a binary on-off switch. Less autophagy isn’t zero autophagy.

As long as you’re avoiding the sweetened versions, or the ones that come fortified with extra protein, and you’re not adding a half cup at a time, a little nut milk won’t make a big difference. There is very little of anything in most nut milks.

Cinnamon is fine. It tends to reduce insulin resistance, especially the kind you get after a bad night’s sleep.

Cocoa powder is okay, but watch the amount. It’s a “whole legume” powder, so it has carbs, protein, and fat. Anything more than a teaspoon will overdo it. If you add cocoa, use defatted cocoa powder. Adding too much of the cocoa powder with fat included will reduce the effects of fasting.

Does coffee with sweetener break a fast?

When you eat it with a snack containing 290 calories, stevia lowers glucose and insulin levels. I see no mechanism by which stevia could make the situation worse without a meal.

Monkfruit extract has an effect similar to stevia. It’s fine.

There’s no good evidence they’ll impair the metabolic response to fasting, but there are other unwanted effects you should want to avoid.

As much as I love (and sell) collagen, it is pure protein, and protein tends to activate mTOR and inhibit autophagy. This means that collagen in your coffee during a fast is probably fine for fat-burning (and may suppress appetite, helping you fast for longer) but will reduce the benefits of autophagy.

How to Order Coffee At a Coffee Shop While Fasting

Don’t use the “cream.” Ask for heavy cream. The “cream” coffee shops tend to set out for customer use is actually half-and-half: half milk, half cream. That gives it a significant protein and carb load that will inhibit the effects of the fast. Instead, if you absolutely need something to add to your coffee, ask the staff for heavy cream.

Avoid nut milks. Coffee places often use sweetened nut milks, and they use entirely too much of it. An “almond milk latte” will have around 8 ounces of almond milk, far too much for your fast (even if it’s unsweetened).

That’s about it for coffee and fasting. If you have any further questions, don’t hesitate to ask down below. I’ll get to as many as I can in a future post.

Thanks for reading, take care, and enjoy your coffee!

To read more about coffee, visit:

To read more about fasting, check out: