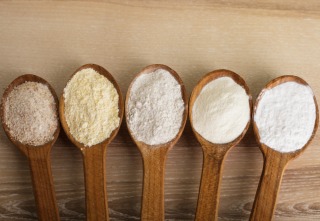 While I don’t recommend making Primalized versions of grain-based foods a staple, the fact remains that people love them. They’re going to want them. There’s not much you can do about that. And if we want to incorporate pancakes, muffins, cookies, and other flour-based items into our diets without ruining everything we’ve worked toward, we need the healthiest, most Primal flours.

The alternative flour market has exploded in recent years. A decade ago, you had gritty almond flour and fibrous coconut flour, and that was about it. Today, there are many more flours to sift through. But what are the best ones? Which ones fit best into a Primal way of eating, and why?

Today, I’m going to lay it all out. I’ll give a brief explanation of each Primal-friendly flour, including the facts, features, and characteristics that I find relevant and notable. That way you can decide what’s best for you.

You know it. You love it, or at least tolerate it. For most long-term Primal eaters, almond flour was the only option if you wanted anything approximating a cookie or a pancake.

Rich in MUFA: Over half of the fat in almonds is monounsaturated, the same kind found in avocado and olive oils. It’s really good stuff.

Calorically dense: A cup of almond flour has about 650 calories. It’s more than a cup of whole almonds, which is already a lot of nuts. It’s a tightly-packed cup of pulverized almonds. If you’re eating almond flour pancakes, it adds up quickly.

Moderately high in PUFAs: Nothing wrong with the PUFAs in a handful of almonds, but it’s easy to get too many eating baked goods made from PUFA-rich almond flour.

Less oxidatively stable: Increasing the surface area of an almond by milling it into flour makes the polyunsaturated fats more vulnerable to oxidative damage. Heating the flour adds another oxidative input.

You’ve probably heard of tapioca starch. That’s pure starch pulled from the cassava root. This isn’t that. Cassava flour is the whole dried tuber ground into a fine, mild, adaptive flour. But before you get too excited, know that cassava root—even the whole food—isn’t terribly nutrient-dense unless you count starch. It’s mainly useful as a reliable source of starch for people who rely on it for caloric bulk. So the flour, even derived from the whole root, is basically glucose.

Coconut flour is made from dried coconut flesh with most of the fat removed. Only a little bit remains—a gram of fat per tablespoon.

High in fiber, low in digestible carbs: A quarter cup of coconut flour contains 16 grams of carbs, 10 fiber, 6 digestible. It enjoys a correspondingly low glycemic index and can even make other foods lower in glycemic index when incorporated.

Contains prebiotics: A portion of the fiber in coconut flour is fermentable (PDF) by the gut bacteria, which create butyrate and other beneficial short chain fatty acids as byproducts.

Tricky to work with: Coconut flour is incredibly dry, fibrous, and absorbent. It soaks up liquid like nothing else. Cook with a quarter of the flour you’d usually use, and have extra eggs handy.

Anthony’s seems to be the best value.

I’m going to be honest here. I have a bag of it sitting in my pantry, picked up from Trader Joe’s, but I haven’t used it yet. From what I gather, coffee flour is a great flavor enhancer (think roasted fruit rather than espresso) that also provides a ton of micronutrients. You probably don’t want pancakes made entirely out of coffee flour, but a couple tablespoons added to the gluten-free flour of your choice would probably turn out really well. Another option is to add to smoothies.

High in potassium: A tablespoon has about 300 mg of potassium.

High in fiber: The product is new enough that studies haven’t yet determined the fermentability of the fiber, but I’d wager a guess that coffee flour will have prebiotic qualities.

Tricky to work with: Like coconut flour, green banana flour soaks up a lot of liquid. Cook with 2/3 of the flour you’d usually use, and have extra eggs handy.

Hazelnuts receive little fanfare already—especially this side of the Atlantic. Hazelnut flour gets even less. That’s a mistake, as hazelnuts are incredibly underrated in the nutrition department. They also taste great, although I find the flour lends itself best to desserts.

Surprisingly nutritious: Hazelnuts and their flour are good sources of vitamin E, manganese, and magnesium.

Has surprising heart health benefits: Hazelnuts reduce LDL particle number, improve cardiovascular health beyond the effect they have on lipid profiles, and reduce the susceptibility of LDL to oxidation.

Potato starch is just that—starch—so don’t expect any micronutrients. Most use it as a complement to other gluten-free flours, finding it lends a light, fluffy quality to the finished product. I included it while omitting other pure starches for three main reasons:

If you’re making gravy or need to thicken a pan sauce, a tablespoon or so whisked into liquid (e.g. broth, water, milk, cream) then added to the pot will provide the perfect texture.

If you want a quick source of resistant starch, stir a couple tablespoons into a glass of sparkling water.

What’s notable (besides the three reasons I keep it around)?

Resistant starch: Gram for gram, it’s the best and most inexpensive source of resistant starch around. Add it to smoothies or mix a couple tablespoons with sparkling water and drink it down. Keep it away from heat, or else you’ll turn the resistant starch into plain glucose.

Some people have reported stomach pain and digestive issues with resistant starch consumption. Not many, but some. If that’s the case, start really small—a half teaspoon or so—and work your way up to larger doses. The benefits to your gut biome are worth the wait.

I always go with Bob’s Redmill.

You’ve probably not tried this. I actually find tigernut flour subpar for baked goods thanks to a grittiness that never quite goes away. It’s an intrinsic characteristic, resistant to heat, high powered blending, and every other form of food processing available to home cooks and, I assume, food manufacturers, or else the companies that make it would eliminate the grittiness.

Believe it or not, it’s still one of my favorite flours. Mixed with Greek yogurt, it lends a subtle sweetness. And because you don’t quite “chew” Greek yogurt, instead sorta swallowing it whole, the grittiness doesn’t impede enjoyment. But by far the best way to eat it is in ball form. Add tigernut flour and nut butter (peanut honestly tastes the best, if you’re a legume heretic) in a 2:1 ratio to a food processor along with salt and just enough honey to let you roll the mixture into balls. Freeze the balls and enjoy. Successful variations I’ve tried include adding 85% dark chocolate chunks/bars or even a dash of whey protein.

Evolutionary precedent: There’s good evidence that one of our early African ancestors, Paranthropus boisei, relied on tigernuts for the bulk of calories. Doesn’t get much more ancestral than that.

I love Organic Gemini flour, although this brand claims to have eliminated the grittiness.

As I see it, those are the 8 most important Primal-friendly flours. They cover a wide range of applications, from baking to cooking to prebiotic supplementation to sauce thickening and Nutella making. You don’t have to get them all, or even any.

But it’s nice to have something laying around when it’s 7 A.M. on a Saturday and boy wouldn’t a stack of pancakes be great?

Now let’s hear from you. Got a favorite flour that didn’t make the list? Let me know! Got any questions about these or other flours? Shoot.

Thanks for reading, all. Take care.