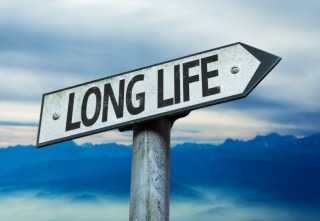 Last year, I wrote about 10 of the most interesting predictors of longevity. Many of them were subjective, but, as we all know, the objective physiological processes that occur in the human body also predict how long we live. Luckily, we can measure most of them. Some are standard at doctor’s checkups. Some require more involved (and expensive) testing. Some you can complete yourself at home with simple household objects.

But if you care at all about how well you’re doing in the longevity game, it’s worth paying attention to some of them.

Also known as the atherogenic index of plasma, a high triglyceride:HDL ratio is one of the best indicators of one’s risk for heart disease. It has the added benefit of also predicting lipoprotein particle size and insulin resistance. These all impact a person’s longevity. It’s difficult to live long when you’re getting heart attacks and your insulin skyrockets if you even glance at a potato.

A ratio of 2 or under is good. Anything above should be addressed before it worsens, and anything above 4 means trouble.

Our bodies use them to build tissue, build babies, and lead robust meaningful lives. Evolution is mostly concerned with propagation of the species—with reproduction. Some waning is unavoidable with the passage of time, but we shouldn’t accept levels that lower health quality and increase mortality.

In older men, low testosterone is a risk factor for early mortality. Add to that all the other examples of benefits I described in the TRT post.

It’s not just testosterone, and not just in men. Fractures are terrible for longevity, often reducing both quality and quantity of life in the elderly. In both older men and women, low T and low estrogen levels are risk factors for fractures. Sex hormones regulate the body’s response to injuries and burns. The older you get, the deadlier injuries get. A 20-year-old slips and falls and maybe gets a little bruise. If an 80-year-old slips and falls, they might break a hip.

Plus, magnesium is safe to supplement. There’s little risk of conflict with other minerals.

As cellular power plants, mitochondria are perhaps the most important organelles in the body. If they don’t work well, we don’t produce ATP, the basic energy currency used by every single tissue, enzyme, endocrine pathway, and organ in the body. We’ll shut down. The aging process, some researchers have proposed, is initiated by the failure of normal mitochondrial function. Living long and living well requires healthy mitochondria.

Healthy mitochondria start with the right building blocks—the right fatty acids in the right proportions. Accumulating evidence suggests that mitochondria with a lot of omega-6 PUFAs are more prone to oxidative stress. A “PUFA-deficiency,” for example, preserves mitochondrial energy metabolism in the presence of ethanol abuse. Sounds like a nice deficiency to have.

The fatty acids present in the blood are worth examining but offer only a  transient glance at the state of your health. Looking at the fatty acids that make up your red blood cells is more predictive. Generally, a higher proportion of omega-6 linoleic acid is bad for longevity and predicts earlier death and physical and cognitive decline.

Like the previous marker, RBC fatty acids aren’t easy to test, but your RBC fat ratios respond quickly to the fats you eat.

You might think that this is simple correlation. People with large waists are probably overweight or obese, with all the health issues that stem from those condition. That’s part of it, but waist circumference measures a special type of fat with unique effects on our metabolic health: visceral fat.

Visceral fat, as measured by waist circumference, is highly inflammatory. It secretes inflammatory cytokines like IL-6 which contribute to the type of systemic inflammation that’s at the root of many aging-related diseases.

That’s probably why waist circumference predicts mortality at all levels of BMI, from severely underweight to morbidly obese.

A good rule of thumb is 35 inches and under for men, 32 and under for women. That’s the ideal—something to move toward. Measure at your belly button.

In cancer patients, for example, those who eat the most insulin-producing foods have worse cancer and overall mortality.

In middle aged adults, hyperinsulinemia predicts cancer mortality, even when you control for diabetes, obesity, and metabolic syndrome.

In older adults with type 2 diabetes, insulin use predicts mortality.

Luckily, much of this biomarker information is actionable. They aren’t all just correlations, or genetic. You can actually improve them by improving how you eat, train, and live.

Avoid industrial seed oils. These are the richest sources of omega-6 fatty acids in the modern diet, and they’re almost always rancid and oxidized. Terrible for your mitochondria and red blood cell fatty acids.

Don’t snack. Better yet, try fasting sometimes or eating in a compressed window. Constant snacking means you’re not burning the fat on your body (especially the waist) and keeps your liver glycogen topped off. If liver glycogen is full, excess carbs will be converted to fat and your RBC saturation index will drop.

Eat your micronutrients and supplement with magnesium. Spend a week tracking your meals to get a sense of what it takes to consume adequate levels of minerals and vitamins. Take a magnesium supplement.

There are certainly other biomarkers that predict longevity and long-term health and functionality, but these are some of the most accessible and actionable.

There’s more to come on the longevity issue. For now, start thinking about these biomarkers. How are you doing on them? What can you change?