5 Unconventional Ways to Extend Your Life 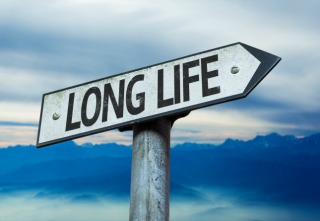 I’m talking about cold, hard days, weeks, and months. Ticks on a clock. Objective measurements of time. Not just the perception of time, although that matters too.

Live somewhere green, or grow a bunch of plants and trees in your yard.

We’re built to live in nature, amongst trees, rivers, meadows, wildflowers, beaches, and other trappings of wilderness. It’s where we come from. On a fundamental, genetic level, nature is home. That’s why spending brief interludes in forests can reduce stress, improve glucose tolerance, and boost anti-cancer activity. That’s why spending time in green space can make us more creative and less anxious. It’s why even seeing pictures of nature scenes or smelling the organic compounds that trees give off can have effects similar to the real thing. It’s a reset.

What if you were to live in a place like that? Maybe living in a forest isn’t feasible for most people, but having a garden, living near a park, getting a ton of houseplants, or choosing a tree-lined street rather than a desolate one isn’t so unreasonable. Turns out that women who live near greenness (parks, forests, gardens) live longer than those who don’t. The longer they live near the green, the lower their mortality risk.

Yes, it’s observational. But consider that we have the potential mechanisms outlined in the first paragraph and described in full in this post. We have the observation that chronic exposure to greenness predicts lower mortality risks among women even when you control for socioeconomic status, race, and any other variable that could throw off the findings. I think we’ve got a solid strategy for life extension, folks.

Most people have a voice in their heads telling them to take this risk, start that business, pursue this dream, go to school for this subject. Whether you call that your conscience (with or without a cartoon cricket embodying it), a direct mainline to your deity, your higher self, or whatever, that voice is trying to tell you something about your life’s purpose. Having a life’s purpose, and pursuing it, is a very strong predictor of “allostatic load”—the amount of physiological and psychological wear and tear a person displays. Higher loads mean shorter lives, and people with a purpose have lower loads.

If you don’t have a purpose, conjuring one up might not work. But the good news is that everyone in my experience has a purpose. It’s just that most people ignore it, fear it, or doubt their own ability to realize it. Just don’t lie to yourself. Search within and follow your honest calling, not what you think you’re supposed to be doing.

Eat a lot of collagen.

First, glycine, the primary amino acid in collagen, is anti-inflammatory. It counters the potentially negative effects excess methionine has on lifespan. It balances out the muscle meat we eat. In one recent study, people with low glycine levels and high meat intakes were more likely to have diabetes, while heavy meat eaters with higher glycine levels were protected from diabetes. Another study found that low circulating levels of glycine predicted diabetes risk. Indeed, a lack of glycine may be responsible for the oft-cited (and criticized) link between meat consumption and various diseases.

All this is why I make a point of emphasizing collagen my own diet—and why I offer a product to help anyone (myself included) boost their collagen intake. (Did I mention there’s a chocolate version now?)

Second, collagen is good for the skin. In middle-aged Korean women, 6 grams of collagen per day reduced skin cracking and increased serum collagen, collagen peptides reduced wrinkling in another study, and collagen has also been shown to improve skin elasticity.

Why does this matter for longevity? Having “youthful-looking skin” isn’t just cosmetic. It indicates the health and longevity of the person who possesses it. Apparent age of face actually predicts longevity better than many objective markers. If collagen improves skin quality and strength, reduces wrinkles, and makes you look younger, it might actually make you younger.

People are crazy about cold exposure. It has many benefits and, perhaps most importantly, it takes a lot of guts and toughness to submerge yourself in really, really cold water. The simple act of facing that fear and bearing the shock is rewarding and signals the type of person you are. At least in animals, it also seems to improve longevity.

Don’t forget about getting really, really hot. It might be easier. It might be downright pleasurable. But there’s considerable evidence that it, too, can extend lifespan—in humans. A recent paper looked at sauna usage and mortality. Those who used saunas the most on a regular basis had the lowest chance of dying from all causes. This supports the recent study where exposing flies to heat activated heat shock proteins—hormetic pathways that sauna usage and other types of heat exposure trigger in humans—extended their lifespan.

Keep your spouse as healthy as you are.

Everyone knows someone, maybe a grandparent, who lost their spouse of many decades to illness and then died soon after themselves. This isn’t just anecdote. Study after study shows that mortality risk sharply increases after the death of a spouse. That’s true if you look at cardiovascular disease, infection, cancer, or almost any other cause—losing a spouse increases the chance that you’ll lose your own life. There are many factors, including the long-term cascade of stress-induced changes. But at the heart of the increased mortality is the initial death of a dearly loved one.

You can’t prevent people from dying of course. You can enlist them in your path to health. You can convince them to work out with you. You can go for walks after dinner, hikes on the weekends, eat a salad instead of that pizza. Your life may depend on it.

If I could bottle all this up in a single ridiculous package, here’s what I’d do:

Pursue to the ends of the earth the animal parts with the highest concentration of gelatin—the Achilles tendons of Himalayan mountain sheep, Turkish water buffalo tails, domestic-turned-feral hog ears from the bogs of the southern U.S., emu feet—and make it your life’s purpose to produce the world’s most gelatinous bone broth. Serve this broth to your spouse, whom you’ve placed in a protective bubble that filters airborne pollutants and infectious microbes and can withstand extreme trauma, including gunshots. Get into a sauna that can accommodate you and the bubble, crank up the heat, and place in the scent diffuser a golf ball-sized chunk of resin derived from five hectares of Oregon rainforest, creating a vapor that provides the same amount of volatile organic compounds you’d be exposed to living in a forest for a year. After that, hop in the shower and turn on the cold water for 15 seconds.

As for me, I’m trying to boil all that down to a supplement. Hopefully by next year.

Jokes aside, these are 5 legit methods I’m confident have a strong chance of extending your life by at least a little. They won’t make you a centenarian if you’re not genetically disposed. They won’t cure disease or add five, ten, fifteen years. They may do nothing, in fact; these are just my educated guesses and extrapolations. There are no guarantees. But at the very least, following these suggestions will result in more exposure to nature, more delicious soups and sauces, better cold and heat tolerance, a reason to live, and more time with your spouse.

That’s pretty good. Sounds like a good life regardless of years.

What do you think, folks? What are you doing in the hopes of living a little longer?