10 Ways to Optimize Your Meat Consumption 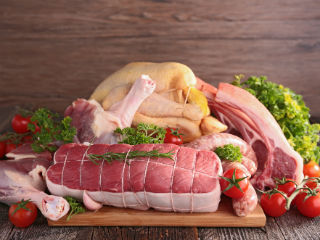 In many ways, the Primal Blueprint developed and grew as a response to the ridiculous overreach of conventional wisdom. I only started looking for new ways to eat and train after doing everything “right” ruined me. All that nonsense about saturated fat and cholesterol clogging your arteries, carbohydrates being required for “energy,” healthywholegrains offering nutrients you couldn’t get anywhere else and lifelong protection from disease was so odious and obviously incorrect that it drove tens of thousands of people into the waiting maw of MDA. Perhaps the biggest piece of faulty conventional wisdom is the supposed lethal danger of meat. When you feel great eating meat every day, when a rare steak seems to improve your performance in the gym, when you tried going vegetarian for that hot vegan girl one time and ended up gaining ten pounds of belly fat, it’s hard to believe the experts.

And so you go the other direction. You eat as much meat as you can physically stomach. You eat bacon every morning, burgers every afternoon, and steak every night. If some is good, and the claims of meat’s lethality are erroneous, surely most is best. It’s an understandable backlash.

But it’s probably not the best way forward.

Just because conventional wisdom got animal flesh wrong doesn’t mean there aren’t better and worse ways to eat it.

Just as I’d say with any otherwise healthy food—cheese, almonds, broccoli, spinach, eggs, sweet potatoes—there are limits to healthy consumption. You shouldn’t eat unlimited amounts of anything. There are always downsides.

1. Eat lots of animals, not lots of one animal

I’m not even saying that research should be ignored. It may very well be telling part of the story. Paul Jaminet’s coverage of the Neu5GC issue in particular is somewhat compelling and makes me think twice about eating red meat every single day. Just don’t let it paralyze you. If you ask the “experts,” there’s something “wrong” with almost every meat out there. So spread the “damage” by eating a variety of animals.

If you eat a lot of red meat, be aware of your iron status and make adjustments if necessary.

Eat calcium-rich foods with your meat. This reduces iron absorption and, in animal studies, reduces the carcinogenicity of dietary heme. In fact, animal studies that show links between red meat/heme intake and colorectal cancer use low-calcium diets. The cancer won’t “take” on high-calcium diets.

Give blood if you have iron overload (and maybe even if you don’t). Blood donation is a fast, easy way to reduce iron levels in your blood.

3. Don’t grill, sear, and char every piece of meat you eat

Healthy people can easily handle a seared piece of meat or crispy roasted chicken. A lovely seared steak, rare on the inside, is perfection. That’s no mistake; that’s our biology responding to a bolus of important nutrients. There’s even a good chance that the occasional intake of high-heat carcinogens provokes a beneficial hormetic response.

Don’t stress out over this—despite their love of grilled red meat, Argentines have some of the lowest rates of colon cancer in the world—but don’t ignore it, either.

I know I know. That crispy chicken skin is the best part of a roasted bird. But the evidence is pretty clear that for folks with type 2 diabetes, insulin resistance, and other hallmarks of the metabolic syndrome, reducing intake of dietary AGEs (advanced glycation endproducts, formed during high-heat dry cooking) can improve outcomes.

5. Eat the whole animal—or a facsimile of it

I don’t mean you have to haul an entire steer into your kitchen. But do try to recreate the effect of eating the entire animal, which is how humans consumed “meat” for hundreds of thousands of years. Get the bones, scrape the marrow, and make broth. Eat the offal, especially the liver and heart. Don’t toss the skin (and consider asking your butcher for extra swathes of it!).

A couple years ago, I made the case that vegetables, herbs, and other edible plants are especially important for meat eaters. I stand by that.

Cruciferous vegetables like broccoli counteract the formation of potentially harmful meaty compounds in the gut. Coffee, tea, and red wine also have similar effects (although we don’t often think of them as plants, these drinks are made from plants).

When used in marinades, plants like ginger and garlic can prevent the formation of carcinogens in meat exposed to high-heat cooking techniques.

A few years ago, a study came out seeming to show that a high-meat diet leads to unhealthy gut biome, whereas a low-meat diet has the opposite effect. Except that the high-meat diet was more of an all-meat diet consisting entirely of cold cuts, cheese, bacon, and BBQ. It was entirely bereft of prebiotic fiber, or vegetation in general.

There’s even a ton of research showing that resistant starch consumption makes red meat less carcinogenic. Maybe a couple spoons of raw potato starch or a serving of resistant starch potato salad are good side dishes next time you have a steak.

Meat is one of the richest sources of methionine, an essential amino acid. But there’s some evidence, albeit mostly in animals, that excessive methionine can depress lifespan and that putting rats on a low-methionine diet extends their life. Where does collagen come in?

Collagen is the single best source of glycine, an amino acid that “balances” methionine. In those same rats, adding glycine to a methionine-rich diet restores longevity.

You can do this by eating collagenous cuts, like ears, feet, skin, tails, and shanks. You can do this by using supplementary collagen (or eating foods that contain it). You can make healthy gelatin snacks with powdered gelatin (I like using green tea as the base).

Grass-fed and pasture-raised meat is better for you (more nutrients, better fatty acid profile, more healthy trans-fats), better for the environment, and better for the animal (a grass-fed cow has a happy life and one really bad day). If you intend on making meat a significant part of your diet, you should emphasize its quality.

10. Make sure you’re eating the right amount of protein

That’s it, folks: 10 ways to make your meat-eating healthier and more effective.

What did I miss? How do you optimize your meat intake?