We interrupt our regularly scheduled Friday Success Story to bring you a timely and critical look at this week’s Hottest Health Headline. And who better to tackle the research in question than expert study-dismantler Denise Minger? You may remember Denise from the recent article she wrote for MDA in which she went toe-to-toe with a study linking a high fat diet with breast cancer. Today she takes on our nemesis, our foe, our mortal enemy – the Whole Grain. And now, Denise…

A headline-grabbing study just hit the press, and on the surface, it looks like a home run for team Healthy Whole Grain. This chunk of research – officially titled “Dietary Fiber Intake and Mortality in the NIH-AARP Diet and Health Study” – followed a pool of over half a million adults and found that, across the board, the folks eating the most fiber had lower rates of death from almost every disease. But here’s the kicker: The only fiber that seemed to boost health was the kind from grains. Not veggie fiber. Not fruit fiber. Just grains, grains, grains.

I thought so too – but the findings are pretty robust. Compared to the folks who skimped on grain fiber, those eating the most of it had lower risk of death from:

*Figures derived from my personal research; not yet peer-reviewed

By contrast, veggie fiber had only modest-to-neutral associations with mortality, and fruit fiber didn’t have any effect at all – except for a slightly positive relationship with death from infectious disease. (Oops! Maybe an apple a day actually lures the doctor closer.)

For those of us living gleefully grain-free, this study is a real head scratcher. At the very least, it’d seem like the fiber in vegetables – coupled with all their other protective substances – should be decent competition for whole grains, but clearly that isn’t the case. What’s going on here?

As usual, there’s more to the story than what the media regurgitated. Let’s dive in and see what this study really uncovered. It’s actually pretty interesting.

Lucky for us, the researchers managed to record some potential confounders – those sneaky diet and lifestyle factors that easily skew the outcome of studies like these. And confounders there were! Here’s a graph showing the major differences between the folks eating the most grain fiber and those eating the least: 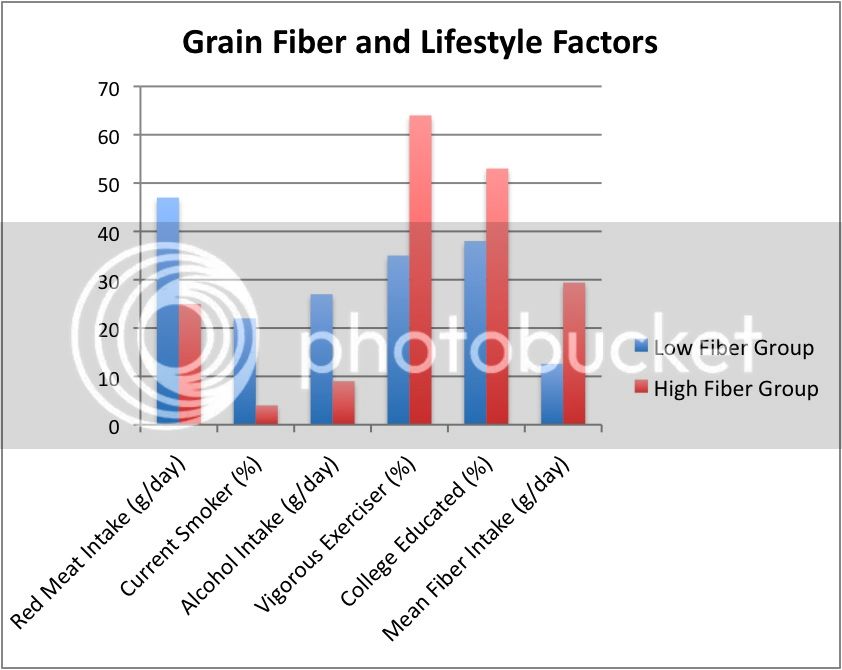 If this doesn’t scream “people with healthy lifestyles choose whole grains,” I don’t know what does. The fiber-lovers were almost twice as likely to be vigorous exercisers (working out more than three hours a week), were much less likely to smoke, had lower intakes of alcohol, and were generally more educated than those with the lowest fiber intake. And we can see that the folks loading up on grain fiber were also cutting back on red meat – showing for the 80- or 90-billionth time that health-conscious people tend to be phobic of certain animal foods. (But that’s a story for a different day.)

Indeed, after the researchers adjusted for their battery of confounders, the protectiveness of grains diminished considerably. Before adjusting for anything, grain fiber was linked to a 47% lower risk of death from all causes – but after accounting for variables like smoking, drinking, and exercise habits, the risk reduction whittled down to only 22%. Ditto for mortality from individual diseases. In fact, because I’m such a graph-o-phile, here are two more showing how dramatically the risk reduction shifted as soon as the researchers corrected for various lifestyle factors. The vertical numbers represent the lowered mortality risk (in terms of percentage) associated with grain fiber – the higher the number, the greater the risk reduction: 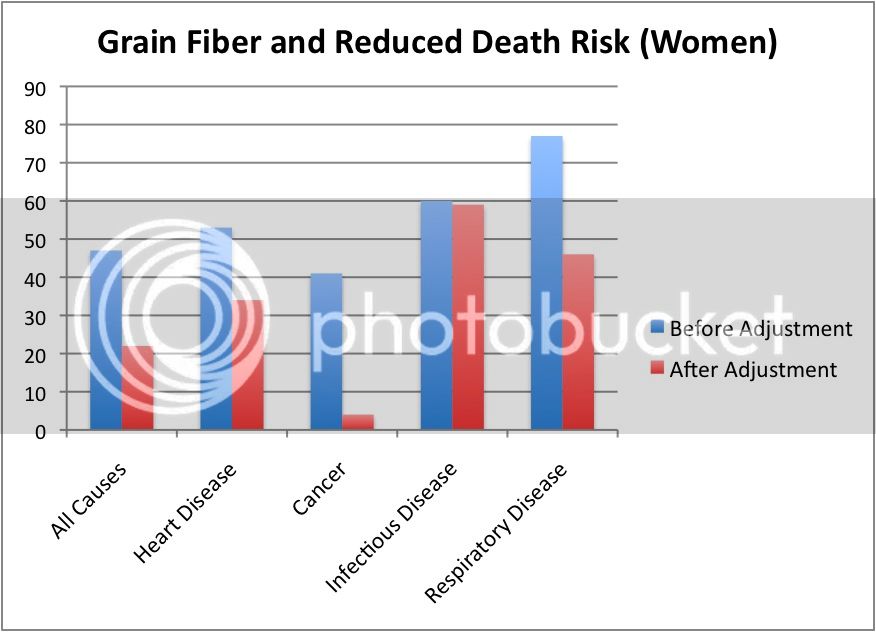 Check that out! From these graphs, we can see that those wily confounders inflated the true effects of grain fiber. In fact, for women, the link between grain fiber and cancer mortality tapered off into insignificance as soon as the researchers improved their statistical models.

Of course, grain fiber still came out looking protective against most diseases – but keep in mind that it’s virtually impossible to account for the smorgasbord of changes people make when they shift towards a healthier lifestyle. The take-home point is that eating whole grains is ridiculously tangled with other health-conscious behaviors. It’s not a stretch to imagine that if the researchers had also adjusted for things like trans fat, vegetable oil consumption, and processed carb intake that the risk reduction from grain fiber would’ve slid even closer to nil.

Except, of course, for that odd relationship with infectious disease – which didn’t budge even after correcting for confounders. Which brings us to…

When I first perused this study with my Skeptic Hat on, the first thing that caught my eye was the steep correlation between grain fiber and reduced death from infectious disease – a stronger connection, in fact, than fiber had with any other mortality variable. That’s pretty cool, but it makes no sense. So I was curious to see how the researchers explained it in their paper:

“Inflammation, a predominant pathphysiologic response in many infectious and respiratory diseases, has been suggested to contribute to the progression of these diseases. Studies have shown that dietary fiber has anti-inflammatory properties. … The anti-inflammatory properties of fiber could explain, in part, significant inverse associations of dietary fiber intake with infectious and respiratory diseases as well a with CVD death.”

Ah, so they’re playing the “inflammation” card. Fair enough. Unfortunately, it doesn’t explain why fruit and vegetables – which, if anything, are more anti-inflammatory than grains – barely put a dent in disease risk in this study. In fact, the researchers’ Inflammation Proclamation makes their findings all the more puzzling.

My money’s on a different possibility: that the researchers failed to account for poor living conditions and socioeconomic status, both of which are huge contributors to infectious and respiratory disease. It’s well known that folks with lower income and social status also tend to have less healthful eating habits – including a lower consumption of fiber – and also have higher mortality from almost every cause. So rather than underscoring some magical pathogen-fighting properties of grains, this study’s link between grain fiber and reduced infectious disease is probably a symptom of some straggling, non-adjusted-for confounders. Dur.

Apart from massive confounding, this study poses another interpretive problem as well. When people hike up their intake of whole grains, it’s not usually a matter of sprinkling wheat bran on their morning danish or chasing a Wonder Bread sandwich with a bowl of oatmeal. Instead, it’s an act of swapping: Folks reach for the whole-grain loaf instead of the white bread; they stir-fry brown rice instead of polished; they ditch the Froot Loops, get adventurous, and buy a special “regularity” cereal with 28 grams of fiber per serving (and then spend the rest of the day looking like an inflatable pool toy).

Heck, even the USDA – in its infinite nutritional wisdom – emphasizes that whole grains should replace refined grains instead of just dogpiling on top of them. Straight from the horse’s mouth: “It’s important to substitute the whole-grain product for the refined one, rather than adding the whole-grain product.” (If the USDA says it, you know they mean business.)

So how do we wade through these webs of correlations and determine what’s really going on? Studies like the recent National Institutes of Health don’t offer a lick of help – epidemiology is notoriously sucky. Fortunately, we don’t have to look too far to find something more informative. A number of Healthy Whole Grain studies actually show that limiting refined grains is just as beneficial – if not more so – than increasing whole grain intake. For example, take a gander at this 2005 study analyzing the grain-noshing habits of over 800 men and women. As we might expect, the folks eating the most whole grains fared the best, while those eating the most refined grains had higher risk markers for disease. No news there. The researchers concluded: “Whole-grain intake is inversely and refined-grain intake is positively associated with the risk of having metabolic syndrome. Recommendations to increase whole-grain intake may reduce this risk.”

Same old, same old. But what the researchers don’t discuss is the intriguing trend that surfaced in one of their tables (viewable here). If we compare the folks who ate the most whole grains (at least 143 grams per day) with those who ate the least refined grains (less than 125 grams per day), the health perks are nearly identical – with the high-whole-grain group actually coming out less favorably in some cases. Compared to those who ate the least amount of refined grains, the abundant-whole-grain group spawned a greater percentage of folks with high triglycerides, low HDL, high LDL, hypertension, and metabolic syndrome. Yowza!

So what does this pattern tell us? For one, that scooting the refined grains off your plate may be more health-protective than eating more whole ones. And that, indeed, the alleged health benefits of whole grains could simply be due to eating less of their refined counterparts.

Of course, this isn’t the only study to unearth this sort of trend. If you’re in a Nerd Safari mood, hop over to this study to read about the lack of benefit whole grains have on inflammation and insulin sensitivity, or this study (PDF) to read about how a diet supplemented with wheat bran caused a slight rise in triglycerides and oxidized LDL. When you do a some digging, you’ll see the evidence supporting Healthy Whole Grains is surprisingly wobbly.

Why Whole Grains Are Only Half the Story

Grains are such an ingrained (pun definitely intended) part of our food culture that, in studies, the question is usually “Which form of grain is best?” instead of the more pertinent query, “Do we even need these lectin-filled suckers in our diet to begin with?”

But if we took an honest look at the second question, current research would veer in a much more interesting direction. Instead of tinkering around with the effects of rye versus wheat or frosted versus unfrosted Corn Flakes, we’d be comparing grain-filled diets with totally grain-free ones – in turn helping us discern, with cold hard science, whether whole grains are truly beneficial or simply less harmful than uber-processed forms.

Do grains contain some valuable nutrients? Absolutely. But so do tree bark, grass, twigs, and other foods that don’t jibe with human physiology. It’s not surprising that diets including whole grains result in better health outcomes than diets rich in refined grains, but that doesn’t mean they’re an optimal choice – just the lesser of some other Neolithic evils.

But back to our study du jour for a moment. Regardless of its findings, keep in mind that this research is correlative. All it does is say Thing One gets higher or lower in relation to Thing Two (in this case, grain fiber and various diseases). There’s no way – none, nada, zilch – to determine whether the relationship is accidental or truly cause-and-effect. The journalists who reported otherwise were being sloppy. Shame, journalists! Shame.

All in all, this is just one more drop in a tumultuous, misinterpreted sea of Healthy Whole Grain studies. If you want to stay afloat, I recommend using that fiber for building your boat instead of filling your stomach.