Why You Shouldn’t Be Afraid of Joining the Status Quo 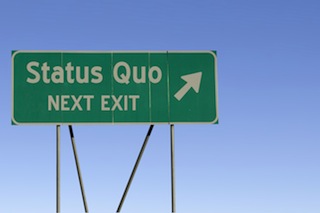 The other day it occurred to me that we’re coming up on 10 years with this blog. In 2006, I started publishing (what were then) wacky, newfangled ideas about how people should go barefoot (or wear Vibrams), eat more animal fat, slash carbs and eschew grains altogether, avoid (most) vegetable oils, stand up while they work, expose themselves to cold, get off the chronic cardio wagon and climb trees or sprint down their streets like 9-year-olds. Finally, there was the proverbial (and ironic) icing on the cake of suggesting people ask what would Grok do—that now illustrious posterman for all things evolutionary. Ten years ago many of these ideas were still viewed as strange or even flat out wrong.

To jump on the Primal bandwagon then meant weathering a certain share of negative feedback—the jabs from coworkers or friends while dining out, the looks from passersby when working out at the park. So, for years, it was a regular theme on MDA to take up these “social” concerns—to remind folks that they shouldn’t give any energy to others’ judgments, that they are blazing their own trails and that they’re part of a growing and supportive community here at MDA and the paleosphere at large. In other words, we’ve spent a good deal of time talking about not being afraid to be different.

The fact is, however, in these last ten years we’ve seen everything from an explosion of barefoot shoe lines to a popping up of CrossFit gyms all over the country, the growth of standing and treadmill workstations to the expansion of farmers’ markets and cow sharing, a slowly turning tide against fast food to Time Magazine exonerating butter on their cover. “Paleo” is even becoming a category on restaurant menus (and not just Primal ones).

Sure, this is all a far cry from the full Primal picture. While more people are eating butter, fewer are clamoring for lard or duck fat. More people might be picking up kettle bells or doing burpees, but not many are on board with the likes of MovNat or isometrics. Some might be cutting their carb intake, but few take the “extreme” path of avoiding all grains. And Squatty Potties have garnered some media attention, but it’s probably safe to say they won’t be coming to a public restroom near you anytime soon.

And yet, the “health movement” as a whole has slowly been shifting into new territory over the last decade, and some of it looks pretty familiar. While adherence to or belief in the full extent of the Primal Blueprint definitely remains the curious if not offbeat exception, more and more individual components of the model are becoming increasingly less unusual. Let’s face it: it’s a new world when your Uncle Bob has monkey shoes and your Aunt Sharon talks about gluten free options for Thanksgiving.

While we Primal types are ridiculously far from being any kind of majority, numbered are the days perhaps of the Primal/paleo pariah. For the second year in a row, in fact, paleo was the most Googled diet. And while U.S. News & World Report might wish the “caveman” diet would just go away, it doesn’t appear we’re going anywhere but apparently more mainstream.

And this might feel a little strange for those of us who have been doing it since the time people wondered if we had our heads screwed on straight. Five, ten, fifteen or twenty years is a long time to live with the knowledge that your choices are branded unconventional at best, dangerous and deluded at worst.

To some extent, most of us Primal old-timers probably had to cultivate a certain detachment from other people’s opinions—including those of our own families or perhaps even partners. If those around us were especially judgmental, maybe we eventually identified with a maverick identity. We got used to the eye rolls and well-intentioned (or not) warnings. Maybe with a mix of humor and defiance, we took a little (or a lot) of amusement from them, maybe even a certain renegade bravado even. Know any good Primal/ancestral jokes? That’s what I mean.

To be sure, we adopted these Primal-style behaviors and principles first for our health. They made good solid sense. They worked for us—often when nothing else ever had. But explaining ourselves got old. Over time, the cultural pushback maybe edged us toward identifying with the practices as a community more than if they had simply been run-of-the-mill choices. While our initial intentions were pragmatic, the responses we got pushed us toward a collective “niche” association. Those of us who never saw ourselves as rebellious subversives thumbing our noses at big CW probably at least asserted the role of free thinker.

So, what does it mean when our trailblazing isn’t so blazing anymore? When we’re telling the whole truth, how do we really feel about certain long-standing, dissident ideals mass marketed around us? Does it become less gratifying on some level when the way we paved is suddenly much more populated on certain turns of the path? We might not feel the same self-satisfaction wearing our FiveFingers at the gym, but can we find other elements to appreciate here? Are there maybe some advantages to being more in line with at least a growing subgroup of the status quo?

We can and should take this is a victory of sorts. The messages—or many of them—have reached people. More are experiencing the positive impacts of healthy Primal minded choices. More people are really starting to get it.

And for our part, we may have to hang up the hat of the rebel, but we still get to be the model. We get to identify with and even flout our extraordinary health, the rare vitality and the uncommon sense of equilibrium that comes from living a life in keeping with our fundamental blueprints. We get to demonstrate how it’s done and what’s to gain. We have the opportunity of encouraging others to embrace more of the Primal/ancestral vision for themselves.

We can hang our Primal hats on the positive effect our choices and community have made on more people’s lives. Many of us probably have never considered ourselves proselytizers or ambassadors for the Primal/ancestral movement. And yet your example has indirectly advocated for the choices others are now freer to make. You share by example the bigger story of what Primal living can do—not just in terms of literal physical health—but also for greater well-being, even a more expansive and satisfying good life.

And simultaneously, we can agree that there’s still plenty of work to do on this front. I decided a while ago I wasn’t going to be happy until I’d helped 10 million people get healthier. Perhaps I set the bar too low. Who knows where the end is.

Even within the Primal/paleo community, there’s uncharted territory to explore. Science delivers new developments every day. Research on the human microbiome is unfolding as we speak and promises to teach us so much about our risk for disease and our possibility of better health.

We’re learning so much about performing at elite levels in endurance events in healthier, more Primal ways. (Look for my book, Primal Endurance, due out in 2016!) The list goes on and on, my friends.

The ancestral health movement remains cutting edge, and more attention will mean more resources for its research and publications. I’m looking forward to being a part of all that’s coming. There’s much to learn, much to share and—oh, yes—still so many boundaries to push. I hope you’ll join me.

Thanks for reading, everyone. What’s been your experience with learning about the Primal/paleo/ancestral movement? What and when were your entry points? What are you most enthusiastic about seeing as ancestral health takes it to new levels? Share your thoughts, and have a great end to your week.