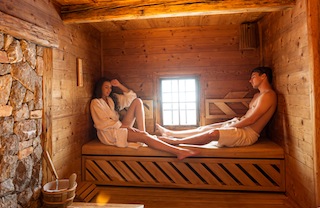 We’ve explored the health benefits of cold (water) exposure. What about heat?

I decided to explore the health benefits of acute heat exposure in the form of saunas, baths, and steam rooms for one main reason: the sauna is a near-universal human tradition, and I’m always curious about those. Indigenous peoples of North America had the sweat lodge, those of Central America the temazcal. The Romans had the thermae, which they picked up and refined from the Greeks. Other famous traditions include Finnish saunas, Russian banyas, Turkish hammams, Japanese sentó (or the natural spring-fed onsen), and the Korean jjimjilbang. Are all these many billions of people across time and space sitting in heated rooms for the heck of it?

As popular as it is to deride traditional wisdoms or practices as outdated, irrelevant, or the delusions of superstitious primitives, traditions don’t arise out of nothingness. And when the same or similar tradition arises in nearly every culture and people ever known, it’s time to pay attention and dig deeper. Universal human traditions don’t always harbor truth and insight into the human mind, body, and condition, but they’re always worth checking out. Confirm before you discard.

Luckily, we don’t have to guess: extensive research into the health benefits of saunas, steam baths, IR saunas, and other forms of acute heat exposure confirms that the human universal of getting really, really sweaty, hot, and steamy on purpose has merit.

The latest piece of sauna research concerns something we’re all thinking about: all-cause mortality. Researchers tracked the health and sauna habits of 2,315 Finnish men with a median age of 53 for over 30 years, finding remarkable correlations between sitting in a really hot room with a bunch of naked men and protection from fatal heart attacks.

This was observational, of course, and the researchers themselves state that further research is required to identify a potential mechanism for the protective effects.

For all intents and purposes, this is really stressful. Our bodies don’t want to get too hot — that’s why we have mechanisms in place to prevent overheating, like sweating — but our bodies also don’t want to exercise too much or go without food. Doesn’t mean those aren’t good for us in the right doses, and the same goes for temporary overheating.

So yes, sauna usage is stressful. After an initial drop in cortisol, it transiently increases sympathetic nervous system activity, the “fight or flight” side of things. Stress hormones increase as the temperature (and your body temperature) rises, and by the end of a thirty minute session cortisol is markedly elevated (particularly in women). This isn’t a surprise. Intense exercise also raises cortisol in the short term. And like regular exercise, longer term sauna usage (daily for four weeks in one study) actually reduces stress hormones.  It’s a classic hormetic response, where acute doses of the stressor increase oxidative stress and provoke a compensatory adaptation by the organism.

How does this translate into better health?

Oxidative stress describes an imbalance between the burden of reactive oxygen species and the body’s ability to deal with them. Whether it’s Alzheimer’s, atherosclerosis, diabetes, depression, or cancer, your oxidative burden plays a (likely causative) role. We have several well-known tools at our disposal for lessening the burden, like exercise, good sleep, smart supplementation, meditation, and others, but targeted heat stress can also help lower oxidative stress in both sick and healthy people.

Improved lipid profiles: In both men and women, sauna use lowers LDL and triglycerides while increasing HDL.

A large body of sports science shows that heat acclimatization — increased heat tolerance — allows athletes to perform better in high heat environments and increase their work output while reducing the overall metabolic, cardiovascular, and muscular strain. One way to increase heat acclimatization is to train in hot weather. Another is with regular use of saunas.

Post-workout sauna sessions improve endurance performance in runners: For three weeks, endurance runners sat in 89° C (+/- 2° C) humid saunas for 31 minutes following training sessions. This amounted to an average of 12.7 sauna sessions per runner. Relative to control (no sauna), sauna use increased time to exhaustion by 32%, plasma cell volume by 7.1%, and red cell volume by 3.2% (both plasma cell and red cell volume are markers of increased endurance performance).

There’s even evidence that you actually can “sweat out the toxins” in a sauna, contrary to conventional wisdom.

Sweat (along with blood, urine, and probably tears) contains bioaccumulated toxins. BPA shows up in sweat, too, even when it doesn’t show up in the blood or urine. Same goes for certain phthalate compounds and their metabolites. Sweat has also been shown to contain arsenic and lead in exposed individuals. So, if acute heat exposure makes you sweat profusely, and various toxins show up in sweat, heat exposure might be helping you clear some of those out. whether that’s in the dry sauna or in a class full of slippery Bikram yoga practitioners, it’s probably getting rid of some industrial toxins you’ve inevitably accumulated.

Still, that’s indirect evidence. Do we know if using saunas can actually eliminate toxins from the body?

Maybe. In one case report, repeated use of a sauna normalized mercury levels in a person with elevated concentrations. And when meth lab-busting police officers with chronic illnesses caused by high exposure to methamphetamine production chemicals tried sauna therapy, they experienced significant improvement.

The human studies are impressive, but animal studies suggest other effects from sauna therapy:

I wouldn’t be surprised if similar mechanisms are in place for humans, too.

What are your options?

Dry sauna: The dry sauna is the most traditional and common form of sauna, using exclusively dry heat. Most “saunas” you see are dry ones, and most research focuses on them. Dry saunas are typically between 160-194 °F.

Steam sauna: It’s a sauna with steam. Steam saunas are more uncomfortable and raise body temperature to a greater degree than dry saunas, but you may have trouble sticking around long enough to get the same benefits you would from the dry sauna.

Infrared sauna: Instead of heating the air, infrared saunas use infrared lamps to heat your body directly. The temperatures used are signifciantly lower (around 120-130 °F) than dry or steam saunas. An infrared sauna therapy known as waon is used in Japan to treat heart failure, peripheral arterial disease, cardiovascular disease, and fibromyalgia, and it can even improve exercise tolerance. Infrared radiation may also improve wound healing,

Don’t get stuck in limbo trying to “optimize” your sauna choice. Just getting into the sauna — any sauna — and getting really, really hot is key. Regular use (at least once a week and ideally more frequently) is better than infrequent use.

Alcohol: Never drink alcohol before or during a sauna stint. This increases the risk of dying, which you don’t want. Many sauna-related deaths involve intoxication.

Multiple sclerosis: Although the changes are transient and totally reversible, sauna usage has been shown to worsen MS patients’ cognitive function and motor control for about an hour.

Strength athletes: Owing to the effects on plasma volume, growth hormone, and insulin sensitivity, sauna therapy is likely going to be beneficial for strength athletes. Immediately prior to training or competition, however, the sauna may have mixed effects. In male athletes, strength endurance and 1 rep max leg press drop in response to preworkout sauna use; 1 rep max bench press is unaffected; maximum power (vertical leap) improves. Another study found that in female athletes but not in males, maximum power decreases after sauna use. It’s probable that these performance disturbances are caused by dehydration, so rehydrating after sauna use might restore performance.

It goes without saying, but be careful. Heat stress is, well, stressful. If you think you’re getting too warm, you probably are and should get out. Heatstroke can happen without warning.

Keep something refreshing to drink on hand in case you get wobbly. Coconut water, mineral water, regular water with a pinch of sea salt are all great ways to maintain hydration when losing a ton of water.

That’s it for today, everyone. Do you use a sauna? If so, what kind? What have you gained from it? Any miraculous stories? Tell me all about it!