Why Is Regaining Weight So Common? 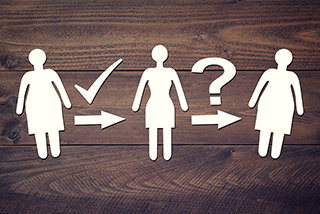 It’s an age-old story. A person has a huge amount of weight to lose and gets rid of most of it through a combination of diet, exercise, and lifestyle modification. And they feel fantastic. They’ve got energy for days, their skin glows, they exude newfound confidence, and they experience other small miracles. Many of you have lived this. But then something happens: the weight loss stops, or, worse, it reverses. They can keep the weight at bay as long as their diet is ironclad and they don’t skip any workouts, but as soon as they slip up even a little bit, they gain weight. And when they gain, they seem to gain it faster and more easily than should be normal. It just doesn’t seem fair.

It comes down to how we gain and lose weight.

The vast majority of fat cells are created and established during childhood and adolescence. During early infancy and from ages 9 to 13 appear to be especially crucial stages for adipose hyperplasia (PDF). After adolescence, you’re pretty much stuck with the number of fat cells your body has made. There are some regional differences in how adults gain body fat, with overfeeding creating new fat cells in the lower body fat but not upper body fat, but for the most part, the number of fat cells a person has is fixed during adolescence and only increases in adults with obesity. If your existing fat cells are filled to the brim and there’s nowhere else to put the incoming energy, the body will make new ones.

In fact, adult adipose hyperplasia is a safety feature. As much as we hate the idea of adding entirely new fat cells to our body, they’re storage depots for excess energy. If you don’t have the extra fat cells for spillover, you’ll start depositing fat in the liver and around the other organs — basically, anyplace that’ll take it. This can have disastrous effects on our health. Animal studies show that inducing adipose tissue hyperplasia in energy excess alleviates the symptoms of type 2 diabetes in obese mice, while hypertrophic obesity (bigger fat cells) is associated with type 2 diabetes. In that respect, hyperplastia delays the development of fatty liver, diabetes, and other diseases of severely excessive nutrient accumulation by providing a place to put the nutrients.

Weight loss doesn’t remove these fat cells, though. It pulls fat from existing ones, leaving the (mostly) empty cells behind. A formerly obese person who’s dieted and exercised down to 15% body fat still has the same number of fat cells he did when he was at 35% body fat. The fat is just spread more thinly, which makes avoiding weight regain more difficult. Why?

It has to do with leptin.

People tend to say that leptin reflects fat mass. That’s true, but it’s not the complete story. Leptin levels reflect fat mass and the size of each fat cell. That means that total adipose tissue (body fat across the body) and the size of the individual fat cells affect the secretion of leptin, with small fat cells (of which the formerly obese have an abundance) secreting about 1/7 as much leptin as a larger fat cell. If you’re walking around with a ton of tiny, mostly empty fat cells after weight loss, you will secrete far less leptin than a perpetually lean person sitting at the same body fat percentage. This has several effects that predispose the formerly obese to weight regain:

This makes things harder for the formerly overweight or obese. Even if they’ve lost a hundred pounds and gotten down to ideal body fat percentages, they still have all these fat cells that want to gain weight, make you hungry, and stop you from expending too much energy.

Are there any methods for culling “extra” fat cells? There are methods that work but are probably unfeasible or have undesirable side effects:

Adipotide is an experimental weight loss drug that kills fat cells by cutting off their blood supply. This causes rapid weight loss in monkeys, and human trials are underway. A few human guinea pigs have already got their hands on the stuff, of course, but their preliminary results don’t look too promising unless you like kidney damage, hypoglycemia, cloudy urine, iffy bladder control, strange bumps at the injection site, and constant pain. I’d take a real long wait and see on adipotide.

There are a number of plant compounds that work in animals or petri dishes, like green tea extracts and resveratrol. Will sipping matcha green tea and Chilean malbec destroy your fat cells? Probably not, but it can’t hurt to try and they can certainly be healthy additions to a diet in their own rights.

Liposuction removes fat cells from desired regions, though the feasibility of long-term maintenance of these losses isn’t clear. Animal studies indicate that surgical removal of fat cells redirects subsequent fat gain to different parts of the body. In a recent human trial, liposuction subjects regained their lost weight within a year, all of it going to the belly and visceral stores.

There is one method that works in animals and live humans, but it doesn’t actually kill fat cells. It converts them into a more useful type of fat:

Cold exposure. It turns out that cold exposure has the potential to transform white adipose tissue cells into metabolism-stimulating brown fat cells. In one recent study, researchers took belly fat samples from the same people during the summer and winter. Biomarkers of brown adipose tissue activity were higher in the winter belly fat. In another portion of the study, people held ice packs against their thighs. Thigh tissue samples revealed greater conversion of white fat into brown fat in the lean members of the group, while the obese had less brown fat conversion, probably due to higher baseline inflammation levels. A more recent study found that cold applied to human neck fat initiated the conversion of white fat cells into brown ones. If you can’t kill ’em, convert ’em.

One problem with this: it’s not a one-and-done deal. Cold-converted brown fat can revert back to white fat if the stimulus is withdrawn, though not immediately. Periodic cold exposure, even if it’s just taking early morning walks in short sleeves or cool showers or regular dips in cold water several times a week, might be required for people trying to maintain the browning.

There are no easy answers, unfortunately. It’s a simple fact that the formerly-obese have to work harder, exert more willpower, and be more fastidious with their diets to avoid weight regain. But it can be done, and until we have safe, effective, and long-lasting methods for removing or prompting the clean death of unwanted fat cells, or until leptin therapy becomes cost effective, I expect those of you who have lost weight and want to avoid regaining it will have your work cut out for you.

Just remember: you have a home here and a supportive community ready to help and provide support, camaraderie, and empathy. You have a solid framework — or a blueprint, if you will — for maintaining healthy eating, moving, and living habits.

Thanks for reading, everyone. I’d love to hear your thoughts, questions, and concerns in the comment section below.