Why I Love Coconut Oil (Plus a Free Jar for You!) 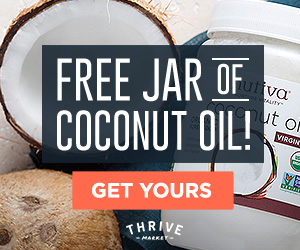 How would you like a free jar of organic coconut oil? Lucky for you, Thrive Market is offering all first-time members a FREE sample box—including a full-size jar of Nutiva organic virgin coconut oil. This sample box—valued at $25—includes some of the online shopping club’s best healthy products. You can claim your free jar and sample box here. (This giveaway expires on June 24. The rest of the details are at the bottom of this post.)

I’m a big fan of coconut oil myself, and I’ve written quite a lot about coconut oil over the years: here, here, here and here. Since you’ll likely have a jar of the stuff in the mail to you shortly, let’s spend some time revisiting what’s so great about this remarkable oil.

Remember the days when coconut oil was maligned for being high in saturated fat and thus a high-risk oil for heart disease? It seems that rumor is finally being put to rest. Sure, coconut oil is high in saturated fat, but it’s not the traditional saturated fat made up of long chain fatty acids. The structure of fat in coconut oil is unique—65% of its makeup are specialized fats called medium chain triglycerides (MCTs) that, when broken down in the liver, contribute to efficient energy (and fat) burning. It’s more difficult for our bodies to convert MCTs into stored fat.

Lauric acid is a specific type of MCT in coconut oil that has been shown to increase high-density lipoprotein (HDL) cholesterol in the blood. HDL is the beneficial type of cholesterol that mops up excess cholesterol in your blood and transports it to the liver for processing. The higher your HDL, the lower your low-density lipoprotein (LDL) …you know, the kind of cholesterol that is implicated in heart disease. Lauric acid lowers cholesterol by encouraging its conversion to a hormone called pregnenolone, which is a precursor hormone to many other hormones in our bodies and is thought to regulate hormone levels according to your body’s needs.

It gets better. A 2009 randomized clinical trial made up of 40 women showed that coconut oil not only boosted HDL levels in the blood, but also decreased abdominal fat. The women consumed either 2 tablespoons of coconut oil or 2 tablespoons of soybean oil once a week for 12 weeks. The soybean oil group had increased LDL cholesterol and decreased HDL cholesterol (major heart disease factors), while the coconut oil group enjoyed increased HDL levels (a heart healthy measure). As for weight gain, the women on the coconut oil diet had none, and even lowered abdominal fat—the kind of fat that is ridiculously hard to lose and contributes to heart disease.

Coconut oil has been show to defend against viruses, bacteria, fungus, and candida. And there’s some evidence to suggest that it can help improve the body’s response to insulin and assist in regulating our blood sugar levels.

There appears to be no end to what you can do with coconut oil. Because it is heat stable, it’s a great oil for cooking. In the kitchen, I like to use it…

And outside of the kitchen, it can be used:

But careful—not all coconut oil is what it’s cracked up to be. Partially hydrogenated coconut oil has just as harmful an effect on your health as those nasty processed oils full of trans fats. And refined coconut oil is made from chemically bleached and deodorized coconut meat. No thank you.

You want the good stuff—organic virgin coconut oil. And that’s exactly what Thrive Market is giving away this week. So get your free jar here while supplies last and before time runs out. 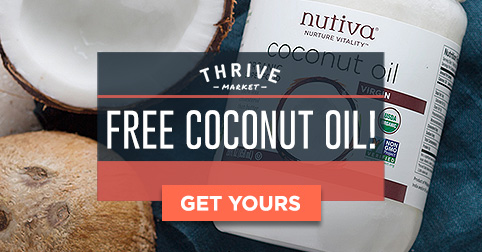 Is Keto Bad For Cholesterol?