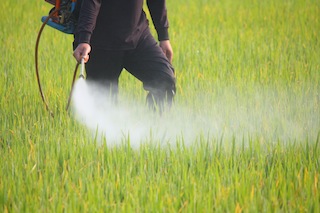 The supernaturally rational adherents to the Skeptic religion irk me. And it’s not because I disagree with all their stances. On many issues, they’re right. But the systematic, overarching, a priori denial of the viability of anything that even sniffs of “alternative” health is ridiculous. I’m not even annoyed at how they deride the ancestral health movement. What really gets me is their flippant dismissal of the potential risks of agricultural pesticides.

One article in particular, from Slate in 2012, exemplifies the sloppy, dangerous thinking on the subject. On the surface, it’s quite reasonable, persuasive, and it hits all the marks.

But there’s another, maybe larger problem underlying this article and others like it: the unflappable acceptance of the Environmental Protection Agency’s safety assessments for synthetic pesticide intakes. You see, before pesticide manufacturers can sell their products in the United States, the EPA “must evaluate the pesticides thoroughly” to ensure they’re safe for humans and the environment. They then use this data to determine the ADI – the acceptable daily intake – for each pesticide. If a pesticide is being legally used in the United States, you have the authorities’ assurance that it’s totally safe.

I wish I could agree with them. I’d end the post here, leaving you snuggled up with the EPA’s cozy assurances that everything is going to be okay, you don’t need to waste money in the organic aisle, and you can stop bothering those nice vendors at the farmer’s market with silly questions about pesticide usage. But I’m afraid I can’t do that in good conscience.

Those EPA safety assessments have a few shortcomings. A recent paper highlights the weaknesses in the current regulatory environment surrounding pesticides in this country:

Pesticide manufacturers conduct the studies that produce most of the data the EPA uses to assess the pesticides.

In theory, the EPA accepts safety data culled from independently-funded pesticide studies, but the independent studies rarely satisfy the stringent and expensive eligibility requirements. The EPA works with the pesticide industry to establish these requirements, including study designs and methodologies that are often prohibitively expensive for non-industry researchers to fulfill (PDF). This usually leaves industry-funded research as the only viable options for inclusion and consideration. And industry-funded studies almost always get results that are favorable to industry. For instance, the easiest way to predict whether atrazine (an herbicide commonly used on corn and sugarcane) has biological effects in a study is to look at the funding source.

This constitutes a clear conflict of interest. It’s not incontrovertible proof of collusion or malfeasance, but it makes me uneasy.

Pesticides aren’t just single chemicals. Commercially, they’re actually collections of various chemicals called formulations. These formulations contain the declared active principle, which is what the safety studies test, and adjuvants, which are supposedly inert and therefore safe. You know how toothpaste has active and inactive ingredients? Same thing here. Just like the supposedly inactive ingredients in toothpaste can have some physiologically significant effects, the adjuvants in pesticide formulations can alter the effect of the active principles.

Adjuvants aren’t included in pesticide formulations for the heck of it, you know. They perform important roles. Some are surfactants that, when included in a pesticide formulation, allow the pesticide to penetrate the cellular walls of insects, fungus, plants, and other pests. Others act as thickeners, emulsifiers, and anti-condensates that improve the distribution and resiliency of the pesticide. They can help pesticides resist rain, runoff, and evaporation. Adjuvants increase dermal absorption of pesticides, too. They are penetrants, remember? In other words, they make pesticides more effective, more resilient, and more damaging to pests; otherwise, they wouldn’t be included. And according to a recent paper, many adjuvants also amplify the toxic effects of pesticides on human health.

Using isolated human cells, the researchers compared the effects of nine popular pesticide formulations with those of their isolated principle ingredients on mitochondrial activity and membrane degradation. In 8 out of 9 instances, the commercial formulations were on average hundreds of times more toxic than the principle alone. The fungicides were the most toxic, followed by the herbicides, then the insecticides (which were comparatively less toxic). Of the herbicides, the extremely popular Roundup was 125 times more toxic than glyphosate, its principle ingredient.

The worst part of all this: most of the safety tests study the active principle, not the full pesticide formulation. This isn’t a new problem, either. As far back as 2006, researchers were questioning the logic behind allowing largely untested adjuvants into the food system via regulatory backdoors. This should be a no-brainer. If you’re assessing the toxicity of Roundup (Monsanto’s popular herbicide that goes on absolutely everything these days, from soybeans to your city parks), you have to actually test the toxicity threshold of Roundup – not just glyphosate. Right?

Real world pesticide exposure doesn’t resemble laboratory pesticide exposure. We’re not exposed to one pesticide and given sufficient time to excrete it. We’re exposed to dozens of them, often all at once, in uncontrolled environments. Could the EPA be underestimating the cumulative effects of multiple pesticides? There’s evidence, at least in animal studies using coho salmon, honeybees, and rats that certain pesticides may be synergistic; when combined, their effects become greater than the sum of their parts. I don’t see why humans would be exempt from the effects of pesticide synergy.

If the effects of exposure to multiple pesticides were merely additive, that’d be one thing. We could tally up our exposures for each, compare them to the ADI, do a bit of simple arithmetic, spend several days trawling the pesticide literature for human health effects, and know where we stand. But if the effects of multiple pesticides are synergistic, if the effects are greater than the sum of the parts, we can’t rely on addition or the EPA’s assessments. Sure, you’d have to evaluate pesticide synergy on a case-by-case basis, and it’s going to be incredibly resource-intensive, but it must be done if we want accurate ADIs for pesticides.

Frozen with fear? Frantically purging your kitchen of all conventional foods? Don’t. That wasn’t my intent. Babies (including the yet-to-be-born) and children should probably go as organic as they can, just because of the unknown and potentially large effects pesticide exposure has on developing systems. Pregnant women, too. And if you eat a lot of these 9 foods, go organic as often as possible because they contain high levels of pesticide residue. But we all need to eat food, and eating conventional produce is healthier than eating none at all. Besides, there are plenty of non-organic foods that you can safely eat.

I just wanted to temper the unflappable faith many people seem to have in the experts, the institutions, the agencies. I wanted to get people talking and thinking. The EPA doesn’t deal in absolute truth; they miss an awful lot, either out of ignorance or because they’re looking the other way. No one does. I certainly don’t. If you meet someone claiming to have all the answer(s)? Run.

Let’s hear from you guys, now. What are your thoughts on pesticides and ADIs? The illusion of authority? Reassurances from the experts that their numbers are correct and you have nothing to worry about?