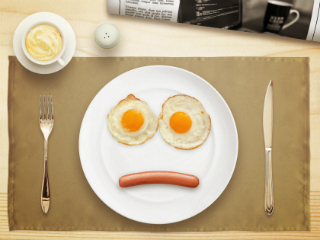 If you’ve been reading this blog for any amount of time, you know I’m always interested in exploring those time-tested bits of advice, those old wives’ tales, that folk wisdom handed down generation over generation because they’re often right, or at least contain a kernel of truth. And if a piece of conventional folk wisdom turns out to be wrong or misguided, understanding why it endured for so many years is a fun exercise and usually reveals other messages and truths. Today, I’m looking at the importance (or lack thereof) of breakfast. For years, you’ve heard how important breakfast is. Your grandma says it. Your doctor probably scolds you if you’re not eating it. We all grow up having this “fact”?breakfast is the most important meal of the day?drilled into our subconsciouses. Even the people who just don’t feel hungry in the morning feel guilty about it and compelled to stuff something into their craws.

Is it right or wrong?

Before I begin, I’m a little biased. I follow a compressed eating window, from noon/1 to about 6 or 7 at night. On a typical day, I’ll wake up and grab a mug of coffee with a splash of heavy cream and a teaspoon of sugar. And that’s it until lunch, my biggest meal of the day. Since I’m such an effective fat burner, this schedule clearly works for me. I experience even-keeled energy on a consistent basis. My productivity is high, I’m happy with my physical performance and ability to recover, and I don’t stress over food because I’m just not hungry. It makes things easier overall. Plus, though solid research in humans is scant on this, I stick to a compressed eating window to promote autophagy (cellular maintenance) and hedge against aging and neurodegeneration (if those things ever come!). Based on what I’ve heard from thousands of readers, I’m not alone on this. But a single anecdote, or a collection of thousands, doesn’t prove much. We need to look deeper.

Well, what do the breakfast proponents actually claim? Let’s examine some of the claims and see what the evidence says.

The epidemiology of breakfast skipping certainly seems to suggest a connection between skipping breakfast and obesity:

So what’s going on here? A few things.

Unhealthy user bias: As breakfast skipping is widely considered to be unhealthy, breakfast skippers may be unhealthy in other areas. They eat more and exercise less, and they’re more likely to drink more alcohol and smoke more cigarettes. Iranian children, for example, who skip breakfast are heavier with larger waists than non-skippers, but they also eat more fast food, fruit juice, salty snacks, and sugary soda than their breakfast-eating counterparts, who favor fruits, vegetables, and milk. Unless you can establish that skipping breakfast causes these lifestyle differences, you can’t say that skipping breakfast plays a causal role.

Dieter bias: Breakfast skippers are likely to be actively dieting, and active dieters usually only diet because they have weight to lose.

The a priori effect: When you presume “breakfast is important” to be true, all your research and results must flow from that presumption.

And a few years ago, a group of researchers took a close look at the evidence other researchers were using to prove the “casual link” between obesity and breakfast skipping. They weren’t very impressed, finding that:

Instead of observational studies, there are a couple intervention studies (where causality can be examined) worth examining.

In 2014, researchers randomly divided a group of dieting adults into two groups. One group was told to eat breakfast, the other was told to skip it. After 16 weeks, weight loss was basically identical across both groups. Neither skipping breakfast nor eating it had any discernible or unique effect on weight loss.

Other studies have indicated that skipping breakfast may actually reduce the overall amount of calories a person eats throughout the day. A spontaneous reduction in calories eaten is generally a path to weight loss.

“Energy” is difficult to measure objectively. There’s no blood test for “chi” or “life force,” so we have to rely on subjective reports of things like “alertness” and extrapolate from related objective markers. Energy expenditure is a decent marker for how much energy you have. If you’re burning more energy, your body obviously has “enough” to spare. Another is blood glucose control. If your blood sugar takes a dive, that typically manifests as hunger and sleepiness.

“Breakfast” doesn’t tell us much. Some breakfasts will give you better energy than other types of breakfast. A higher protein, lower carb breakfast tends to increase energy expenditure and improve “postprandial wellness” (basically, how do you feel about life after eating this breakfast?). If you throw in some fat with the protein, you can even improve a type 2 diabetic’s glucose tolerance throughout the day, which corresponds to steadier energy levels.

Meanwhile, high-carb breakfasts do the opposite: they make people hungrier sooner, cause greater elevations in insulin and a subsequent drop in blood sugar at 3 to 4 hours after breakfast. The reduced satiety, heightened insulin spikes, and low blood sugar combine to make people “hangry,” sleepy, and susceptible to break room donuts to take the edge off.

It’s true that some studies find connections between skipping breakfast and low subjective alertness or cognitive or physical performance. But these studies are either observational, conducted using standard sugar-burning subjects (as opposed to fat-adapted subjects), or concern children and adolescents (a more energy-intensive subset of humanity for whom breakfast skipping is often nonconsensual, unnecessary, and counterproductive). And the ones that do find a positive relationship between teens, breakfast, and subsequent cognitive function find the greatest benefit from low-GI (read: low-carb, higher fat and protein) breakfasts.

If skipping the occasional breakfast is enough to send you into starvation mode, surely all-out fasting for 72 hours will do the trick. Right? Except when healthy humans are told to fast for three days and their biomarkers are monitored, we find that the resting metabolic rate only drops by 8%. 8% is 8%, sure, but that’s a full 72 hours without food. Skipping breakfast doesn’t even compare.

It does seem to make people overeat at lunch, but not enough to make up for the skipped breakfast. In one study of free-living adults, skipping breakfast led to earlier and bigger lunches. Despite the increased hunger and larger lunches, breakfast skippers still ate fewer calories per day than the breakfast eaters. This is consistent with earlier studies showing that breakfast skipping does not lead to compensatory food intake at lunch and dinner, and in fact may reduce calorie balance by over 400 per day. You might feel hungry enough to eat twice as much, but at the end of the day you end up in an energy deficit.

So, can everyone safely skip breakfast?

If you’re eating a higher or moderate carb diet, breakfast may be the best time to get your carbs. Insulin sensitivity follows a circadian rhythm. Muscle insulin sensitivity is highest in the morning and lowest at night?meaning your muscles are primed to accept and store glucose as glycogen with minimal insulin input?so breakfast is a good time to eat some carbohydrates. Skipping breakfast and then eating a high-carb lunch exacerbates the insulin and blood sugar spike you’d normally get. Eating a carb-rich breakfast “preps” your body for the carb load at lunch.

Side note: The circadian sensitivity of carb tolerance can be overcome with training and physical activity, since exercise restores insulin sensitivity independent of circadian phase. So if you’re going to carb-up during a phase of circadian insulin resistance, make sure to train.

If you compete or train really hard in the morning, a small breakfast could be a good idea. On Sundays, when I play my big Ultimate Frisbee game, I’ll have a small breakfast with my coffee?usually a couple scoops of Primal Fuel mixed in water.

If you’re a child or adolescent, you should probably eat breakfast. You’re growing. And the observational studies finding links between breakfast skipping and overweight tend to focus on kids and teens. Just to be safe, eat something.

If you’re a type 2 diabetic eating a high-carb diet, you should eat breakfast (preferably egg-based). A recent study in diabetics found that skipping breakfast drastically increased the glucose spikes that occurred after lunch and dinner. However, lunch and dinner were high-carb and low-fat (20% fat, 54% carb, 26% protein, 700 calories each), which is a terrible combination for type 2 diabetics.

Side note: This presupposes the type 2 diabetic in question insists on eating a high-carb diet. When you give them healthier meals lower in carbs?salmon, nuts, leafy greens, olives, garlic, tomatoes, cucumbers, and a little bread?diabetics can actually skip breakfast and get more favorable glucose numbers at lunch. If you’re a Primal type 2 diabetic eating low-carb, high-fat meals, your meals won’t provoke those kinds of glucose spikes?breakfast or no breakfast.

If you’re a woman, you might do better with breakfast. In general, women function more poorly skipping meals. I’ve covered this before; skipping breakfast just doesn’t seem to work as well for women. That said, a slightly later breakfast?say, at 10 AM instead of 8 AM?may be a good compromise for women who want to try breakfast skipping.

All that said, there is one huge confounding variable the “breakfast is awesome” controlled trials never account for: meal timing entrainment. Almost everyone eats breakfast. The “normals,” at least. So the average study participant is a habitual breakfast eater whose body expects and likely functions best (at least for now) with regular breakfast intake. You get a group of them together, “starve” them, and you’ll see awful results. Huge insulin spikes, glucose crashes, fatigue, general malaise. It’s like fast tracking the low-carb flu, and it’s going to skew your results. People habituate to the eating schedules they follow. If you’re a natural breakfast skipper, skipping breakfast isn’t going to have the same effect on you.

As long as they stuck to their normal eating habits, they had normal responses.

If you’re the type who “never feels like breakfast,” keep skipping it. If it’s easy, don’t eat it. If you’re not hungry, don’t force yourself.

If you’re the type who wakes up ravenous, eat! Don’t skip it just because you read a study somewhere.

What do you think, folks? How do you respond to skipping breakfast?

Thanks for reading. Take care and be good.