Where Do Legumes Belong in the Primal Eating Plan? 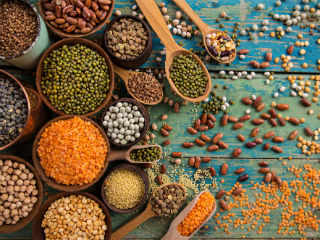 I never cared much for legumes growing up. Growing up, beans were the “magical (or musical) fruit that made you toot.” They existed in a quantum state: beans were your ally in schoolyard rear-facing attacks and your downfall during encounters with that pretty girl from history class. But the issues I had were mostly superficial. I’ve never come out strongly against legumes. My focus has always been on grain avoidance.

Way back, I placed beans and lentils and other legumes in the “Okay” category. If you wanted to eat them, and you had carb calories to spare, they were a decent choice. Flatulence aside, they are relatively nutritious and come with a big dose of prebiotic fiber for your gut flora (hence the gas).

Huh? You might be having one of two reactions:

Sisson just put legumes at the bottom of the PB Food Pyramid! He’s sold out to Big Bean! Get him!

Before you either tar and feather me or subject your office mates to chemical warfare, allow me to explain.

Stephan over at Whole Health Source wrote an interesting article a few years back alleging that paleolithic (and some extant) hunter-gatherers did (and do) utilize wild legumes.

The !Kung San from southern Africa, who in amenable regions eat large amounts of wild tsin beans. Tsin beans are about 33/33/33 fat/protein/carb, kind of a cross between a peanut and bean.

The Australian Aboriginals, who ate a lot of acacia seeds. These days, acacia fiber is a popular prebiotic supplement, but the whole seed was a legume providing ample protein, fat, and calories for the native inhabitants.

The tribes of the American Southwest, who ate the starchy legumes of the mesquite tree.

With regards to the Neanderthals, I doubt they formed a large part of their diet; they were well-known fans of animal flesh. I don’t know that they should form a large part of your diet, either. But legumes were there. As I said earlier, someone had to stumble upon and eat the wild versions before domesticating them.

Okay, so in that sense, legumes are “Primal.” There is ancestral precedent.

But that’s not enough to sanction their use. We’re not in the paleo re-enactment business here. We plumb the anthropological record for hypotheses, but we check them against the current scientific literature.

What does research say about legume consumption? Aren’t they full of anti-nutrients?

I refer to lectins and phytic acid. I’ve mentioned these mostly as a reason to avoid grains and excessive amounts of nuts, but they also apply to legumes. No self-respecting plant wants their seed babies eaten and fully digested, after all.

Lectins are definite anti-nutrients. Studies show that they can damage the intestinal lining, prey upon already-damaged intestinal lining, and prevent the body from repairing that damage. If they make it into the bloodstream, they can bind to cell membranes throughout the body, trigger autoimmune reactions, and cause real havoc. People have actually been hospitalized from lectin poisoning.

However, cooking deactivates the vast majority of legume lectins.

In one study, navy and kidney beans had as little as 0.1% residual lectins after cooking.

Soaking does a number on them as well. A combo of soaking and cooking white beans completely eliminated activity of the most pernicious lectin, the one responsible for kidney bean poisoning: phytohemagglutinin.

It turns out that most of the research indicting legume lectins used animals consuming large amounts of raw lectins. Those people who got lectin poisoning? They ate undercooked kidney beans.

How about phytic acid?

Phytic acid is how many plants store phosphorus. When you eat a food containing phytic acid, it has a side effect of binding to several other minerals, like calcium, magnesium, and zinc, and inhibiting their absorption. Diets based in high-phytate foods can lead to nutrient deficiencies. As legumes are one such high-phytate food, people are justifiably cautious about eating them.

As I’ve mentioned before, phytic acid may have some beneficial anti-cancer effects in moderate doses. In people with excess iron, phytic acid may bind to and reduce iron’s absorption. The right gut bacteria can even convert phytic acid into inositol before it binds to minerals, providing a helpful nutrient that improves mood and insulin sensitivity.

Soaking legumes can reduce phytic acid. In one study using the common bean, cooking without soaking reduced phytate by 20%, cooking after soaking in the soaking water reduced it by 53%, and cooking after soaking in fresh water reduced it by 60%. Another study, also in common beans, found that cooking in fresh water after 16 hours of soaking with a 3:1 water:bean ratio eliminated 85% of phytate.

If you want to really eliminate phytic acid (which is probably unecessary unless you’re eating tons of legumes), you’ll want to soak and sprout your legumes. In one study, soaking for 12 hours and sprouting for 5 days reduced phytate in both adzuki beans and fava beans.

Properly-prepared legumes added to a nutritious diet? Fine. You’re introducing some helpful nutrients without negating your absorption of others.

The legume’s musicality offsets its carbohydrate density. All those sugars and fibers being digested by gut bugs and producing the farts are carbs that you aren’t consuming as glucose. I usually don’t pay too much attention to “net carbs,” but the effect is quite substantial in the majority of legumes.

A half cup of cooked black beans has 20 grams of carbs with 7.5 coming from fiber.

A half cup of cooked chickpeas has 30 grams of carbs with 5 coming from fiber.

A half cup of cooked pinto beans has 22 grams of carbs with 7.7 coming from fiber.

A half cup of cooked lentils has 20 grams of carbs with 7.8 coming from fiber.

Not so carb-dense after all.

What about the gas?

Legumes are a powerful source of FODMAPs, which, depending on your gut biome, can be ally or enemy. Some people won’t be able to handle the gas, while others will get huge prebiotic benefits. What can you do if you fall into the former category?

And remember: the majority of a legume’s fiber is prebiotic. A healthy gut biome will make good use of that fiber, producing short chain fatty acids and bolstering the growth of beneficial gut bacteria. Those with unhealthier gut biomes may have to take it easy, but given enough time and acclimatization eating small amounts of legumes could improve their profile.

Are they actually nutritious, though?

Again, a half cup of beans isn’t very many carbs. Maybe 20 grams, with only two thirds of that turning into glucose. You’ll get a lot of food for your gut and a decent whack of some important nutrients like folate, copper, magnesium, and manganese. That half cup of black beans provides 32% of your daily folate requirements, 20% of copper, 14% of magnesium, and 17% of manganese. A half cup of lentils provides 45% of your daily folate requirements along with 28% of copper and 21% of manganese. Not bad for a measly 20 grams of carbs.

The biggest bang for your buck is probably the lentil.

Take a look at a cup of your average garden-variety lentil:

Lentils added to a meal slow gastric emptying, which should keep a person fuller longer. This is in contrast to most sources of refined carbs, which increase a person’s hunger.

Another benefit is that lentil prep is simple. They contain less phytic acid than most other legumes and require less soaking and cooking time than other legumes to reduce it.

I almost forgot. If you can find a Japanese market near you, look for possibly the best legume dish around: natto. I’ve spoken about this slimy, mucosal fermented soybean before. While it takes some getting used to (and many never get over the hump), natto is the single best source of vitamin K2 in the world. Try it mixed with soy sauce and ginger.

How should Primal people eat legumes? Assuming you’re even interested.

A little bit goes a long way. You don’t need to be pounding bowls of beans. But sprinkling some on your salad a few times a week? Opting for a scoop of (whole, not refried unless you know they use real lard) pinto beans alongside your carne asada? Dipping a carrot stick or two into good homemade hummus? The Primal gods will not smite you where you stand.

What do you think, folks? Where do you fall in the legume wars?