“What’s That?” Ear Health: Dietary and Lifestyle Choices that Preserve It 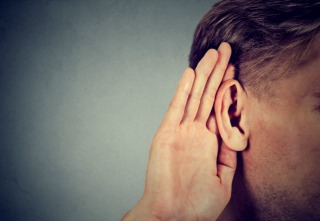 Sure, they’re not exactly the sexiest body part, but it’s fair to say that life with substandard ear health would be notably less enjoyable. And as it happens, millions of Americans would be able to speak to that.

Research indicates that an estimated 1 in 5 folks have some form of hearing loss. This rate increases to 1 in 3 for age 65 and over, but some estimates put hearing loss great enough to impair communication even higher for the upper decades at around 40%. Perhaps even more alarming, close to 15% of American kids have some form of hearing loss. In teenagers, prevalence has jumped from 15% in 1994 to almost 20% in 2006. Unfortunately, that hearing difficulty will often go undiagnosed.

Hearing loss is, in fact, the third most common health condition in the country, right on the heels of arthritis and heart disease. And it’s getting worse. Between 2000 and 2015, the number of Americans with hearing loss has doubled, mirroring a worldwide increase of 44% over that same period.

But it’s not all about hearing. What about ear health? Our ears perform plenty more functions than just auditory reception. Let’s not forget that the ears are instrumental in influencing our emotions and state of mind, maintaining our sense of balance, and regulating pressure.

From what meagre stats are available on ear health, we know that close to 16,000 older Americans were killed in falls in 2005. We also know that nearly half of those deaths were balance-related. And that a whopping third of the population report vestibular symptoms (inner ear-related balance issues). Ménière’s disease, a disorder of the inner ear that causes tinnitus, vertigo and hear loss, affects an estimated 615,000 Americans. That’s enough in the way of statistics to indicate that substandard ear health has broad implications for overall health.

There’s plenty of mechanisms by which our bodies recognize stress. One such mechanism that often gets overlooked is our ears. At a very basic, primitive level, the sounds registered by our ears dramatically impact our emotions. Birdsong, in particular, and trickling water relax our minds and alleviate stress, while the neighbor’s yapping dog or traffic noise from the street rile us up. This lines up with what we know about the all-important vagus nerve, which plays an influential role in how our bodies control inflammation…and which just so happens to have a few tendrils in your ears.

Along with all the conveniences of the modern world, the Grok-friendly natural sounds of the past have slowly been replaced by anthropogenic noise. Cars, planes, trains, incessant chatter… noise constantly surrounds us, and while it may fade into the background, research shows that it’s slowly but surely contributing to chronic stress.

A 2014 literature review of the effects of noise on health noted that it disturbs sleep (duh), increases the occurrence of hypertension and cardiovascular disease, and impairs cognitive performance.

And by triggering stress and the subsequent release of adrenaline, noise can create a negative feedback loop which worsens the health of your ears. Elevated levels of adrenaline lower blood circulation in the peripheral areas of the body, one of which just so happens to be the ears. With chronic stress, the tiny hairs inside your ear canals become starved of blood and the nutrients it provides. The result is a gradual die-off of these auditory hairs, which of course can lead to permanently impaired hearing. This means that noises that might not directly damage your ears can still harm your hearing.

On the brighter side, nature is the best antidote. Getting away from the urban jungle and immersing ourselves in the sounds of nature has been shown to reduce our perception of pain. A similar therapeutic effect is highlighted by this 2003 study, which modeled the stress-buffering effect that “nearby nature” had on schoolchildren. Unsurprisingly, researchers found that “the impact of life stress was lower among children with high levels of nearby nature than among those with little nearby nature.” The science behind restorative natural sound is largely rooted in evolutionary principle. Our inherent blueprints expect the subtle “aural diet” of our ancestors rather than the bombastic range of noises we feed it today.

Hearing Loss: More to It Than Many Believe

I’ll start with the obvious: if your ears are exposed to loud noises, you may suffer from temporary hearing loss. But newish research published in the Journal of Neuroscience suggests that it may not be over even after the concert’s over. According to the study, “acoustic overexposures causing moderate, but completely reversible, threshold elevation leave cochlear sensory cells intact, but cause acute loss of afferent nerve terminals and delayed degeneration of the cochlear nerve.” This means that going to a one-off music concert, for example, might set in motion a degenerative process which can damage your hearing permanently. Scary stuff.

And as the research into hearing loss begins to accumulate, it’s becoming increasingly apparent that ear health is intrinsically tied into your overall health. For starters, smoking has been directly linked to hearing loss. A 2007 study found that newborns who were exposed to tobacco smoke in the womb had a significantly lower hearing sensitivity than those who weren’t. Obviously, if you’re a Primal lifer you’ve long ago washed your hands of the Marlboros, but second-hand smoke is always a risk to pregnant mothers, no matter how healthy they are. Yet another reason to distance yourself from those noxious clouds…

Another sobering fact—there’s also plenty of evidence showing that diabetes can contribute to hearing loss. Researchers from the University of Maryland School of Medicine examined medical records from 53,461 non-diabetic patients and compared them 12,575 age-matched diabetic patients. They found that sensorineural hearing loss was more common in the diabetic patients, and that this hearing loss impact increased with elevated diabetes severity. Other studies have found much the same correlation, with some indications noting that perception of higher sound frequencies might be the first to go.

The Role of Diet for Hearing

Yes, as with everything else, what you eat (or don’t eat) affects your ear health. Apparently, restricting calories is the new big thing in the ear world. A recent Swedish study proved that rats placed on a 70% dietary restriction showed reduced age-related degenerative shrinking of their inner ear tissues. This resulted in significantly improved hearing function over non-calorie restricted littermates.

For those of us interested in less extreme measures, there are other promising dietary strategies to consider. Multiple studies have shown that a diet rich in the vitamins A, C, E and magnesium can prevent hearing loss by minimizing inflammation and increasing blood flow to the inner ear. Crucially, however, none of these vitamins or magnesium alone were effective in reducing hearing loss or sensory cell death: only when applied synergistically did they provide the protective effect (kind of like the A Team of the hearing world). Specifically, their collective effect helped to protect the ear against the negative feedback degenerative hearing damage I discussed earlier.

And there’s plenty more research where that came from. This study used sound frequency testing and a semi-quantitative questionnaire to establish what impact intakes of certain vitamins and minerals exhibited on hearing health. Vitamins A and E showed the most promise, with vitamin A correlating with a 47% lower risk of hearing loss and vitamin E a 14% lower risk. I like those odds but, again, believe that synergy matters.

The role of magnesium in hearing protection has received particular attention in the literature, and the results continue to be positive. If you’ve got hearing problems and haven’t already invested in the formidable healing powers of quality magnesium supplementation, now might be the time.

So while the rest of the world waits for the development of wondrous oral drugs that capitalize on these findings, here’s an insider’s tip: you can get a head start by simply eating wholesome, nutrient-dense foods. Nothing new there, right? Dark leafy greens for magnesium, avocados for vitamin E, liver for vitamin A, and any number of fruit and vegetables for vitamin C. A comprehensive multi can’t hurt either.

Unpacking the Mystery of Tinnitus

Then there’s tinnitus, the frustrating ringing ear condition that regularly affects an estimated 15% of Americans. As far as causes go, the list is long. In addition to noise exposure, tinnitus can develop as a result of excessive ear wax buildup, medications like aspirin and antibiotics, middle ear infections, and aging. Tinnitus occurs when hair cells in the ear’s cochlea are damaged or destroyed, meaning there are any number of pathways by which someone can develop this condition. I have a friend who’s suffered from tinnitus over the past 5 years due to multiple concussions. Ding your head enough times, and your ears may pay the price. There’s even suggestions that certain folks may be genetically predisposed to developing tinnitus, but that research isn’t conclusive.

And despite our growing knowledge of the causes of tinnitus, it’s on the rise. As the urban population grows, so, too, does the percentage of the population exposed to that anthropocentric din I highlighted earlier. Concerts are just as big and loud if not more so than they were a couple decades ago. We have more and noisier machines in our lives than ever before.

But it’s not all doom and gloom. Those same hearing-protective steps I talked about earlier can also be applied to tinnitus. Concentrating on nutrient-dense foods that provide ample levels of vitamins A, C and E, and perhaps supplementing with magnesium oil, should help to prevent those hairs in your cochlea from sustaining significant damage. Continuing the diet theme, there’s preliminary evidence to suggest that zinc depletion may play a role, and that moderate to high caffeine intake per day has beneficial effect. Probably not a great idea to go crazy on the coffee, however, particularly if you’re sensitive to it.

And, not suprisingly, Inflammation is almost undoubtedly at play here as well, verified by a strong association between hypertension and tinnitus. Reducing inflammatory food intake and minimizing stress should therefore go a long way towards lowering your risk of tinnitus. Similarly, vagal nerve stimulation, which uses small electrical pulses to stimulate an anti-inflammatory feedback in the vagus, shows a lot of promise in treatment for tinnitus.

Thanks for reading, everyone. Have you or those you love experienced any of the above conditions? Are you taking any special steps to preserve your hearing and ear health? Have you heard about other medical treatments or lifestyle interventions? Have a good end to your week.