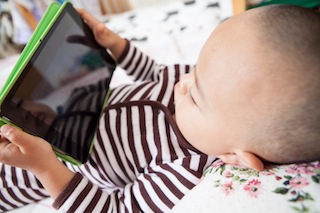 For many parents I know, it’s one of those prime examples of “what I thought I’d never do before I had kids” versus “what I ended up doing after I actually had them.” After all, most of us were children of those pre-tech boom years. (Some of us were even pre-T.V.) We never had all the gadgets when we were growing up. Instead, we spent hours of childhood being bored and finding creative solutions that had no connection to a power outlet. Our tech toys were the likes of Lite-Brite or walkie-talkies (if we were lucky), not $600 app-loaded tablets. Summer road trip? That’s what Mad Libs were for.

What a different landscape today. Computers, laptops, tablets, phones, iWhatever, big screen T.V.s, portable players – not to mention the infinite libraries of apps, Netflix, Hulu and (of course) the Internets. Let’s face it. All those Baby Einstein DVDs seem quaint compared to everything a kid could do on a smart phone these days.

With their phones, computers, T.V.s and other gadgets, teenagers’ tech use might be well over eleven hours a day of screen time, according to a Kaiser Family Foundation report. The average 8-year-old isn’t far behind with eight hours of screen usage. (PDF)

How are these hours being used? A Nielsen study showed that 55% of kids 12 and under who used their parents’ tablets played with them during travel – whether to/from school or on longer treks. Forty percent of the kids used them while at restaurants or other events. As for teenagers, over 75% of them have their own phones. Consider the rather striking statistic that the average teen with a cell phone sends nearly 3400 text messages each month. Add to that all the music, video, social media, gaming and other entertainment applications.

And what a price our kids are paying…

Other than an head-scratching study here or there citing some slight advantage of electronically-based “academic” learning, the vast body of research indicates that heavy – and early – use of electronic media impairs a child’s socio-emotional development and can even lead to mental health issues. Consider that early screen time (at ages one and three) has correlated with a higher risk for attentional issues by age seven.

Children 8-18 who showed heavy technology use reported lower grades, more disciplinary issues and increased sadness and boredom. (PDF) Other research confirms these connections, with kids responding “true” or “somewhat true” more often to study questions such as “I am often unhappy, down-hearted or tearful” or “I generally play alone or keep to myself.” Even significant physical activity wasn’t enough to shift these impediments.

Perhaps the scariest statistics are those that reveal the impact of technology on social skills. One study showed that preteens who went without access to technology for six days (as part of a camping trip) had significantly better recognition of facial expressions and nonverbal emotional cues than those who had regular access to their gadgets. (Both groups took pre- and post-tests.)

Finally, we all can guess the most obvious effect of screen (i.e. sedentary time). Kids with heavy tech usage or who have T.V.s in their bedrooms are at a much higher risk for obesity – a risk that lingers well into adulthood.

This is a drop in the bucket as far as impact.

Let me back up for a minute and say I’m not an absolutist who believes screens have no place in a child’s home or education. I don’t think this discussion can be reduced to the “big, bad iPad.” It amazes me what can be illustrated through video or interactive demonstration on a classroom tablet. I’m amazed at some of the things my kids can do as a result of their experience with technology and with what’s available to them (photos of Pluto, anyone?). I just don’t ever want them to lose sight of the fact that the virtual world is a lesser reflection of (and simple tool) for the pretty awesome real world.

Nor do I have interest in joining the angry fervor that gets pinned on some random stranger who suddenly becomes the social media effigy of bad parenting just because someone saw her at the park when she was on her phone and decided to write an article about how she was all that’s wrong about American parenting today. Call me stubborn, but I question the benefit of pinning a society-wide problem on a single individual. With this in mind, I don’t automatically judge the person who allows his/her child to play on the phone in the grocery store line or in a barber shop chair. How do I know what kind of day it’s been for that family? And who am I to know what kind of emotional or sensory experience sitting in a raised chair with scissors in his face might be for that 4-year-old kid? It’s not about judging someone’s strategic use of technology.

All that said, I don’t think this precludes anyone from suggesting it’s time to deal with the broader trends here. Assuming we start with ourselves, what does a solution look like? Let me throw out some ideas….

Ration – but don’t treat screen time like a reward.

Why is it we blame kids when they whine and cajole for extra time with their devices, but then we turn around and “gift” them added tech hours when they get good grades or clean their room. Resist their ploys to “earn” more time in front of a screen, and set your own limits – no apologies necessary.

Figure out a limit you’re comfortable with, being sure in most cases to lump all entertainment screen time together (it all has more or less the same effect). The American Academy of Pediatrics suggests no more than two hours daily for children above two-years-old. (They also offer some wise tips for assessing your family’s media diet and for making a family pledge with rules for safe media use.)

Make dates with the real world.

One of the reasons I think kids are so hooked into the virtual world is their disconnect from the more charming aspects of the real one. When technology becomes the window on the world in the educational sector (guess we don’t need field trips anymore!) and the entertainment source at home, there’s not much incentive to go anywhere else.

Make a priority of taking your kids to live concerts, live performances, town festivals, parades, fairs and active entertainment venues (e.g. corn mazes, trampoline parks, etc.) – and most of all natural settings. Sure, we need to consciously reduce the time kids spend with screens, but the best way to do this is to give them something to say yes to – a better alternative of fun, social and enriching experience.

Too often our admonishing diatribes reflect a “Do as I say, not as I do” reality. We cut our kids off from their devices but are on our own gadgets during all hours of the day – including family time like meals, conversation or bedtime.

Be the change you want to see in them. Give them a model – and the gift of your full presence. It’s heart-wrenching, quite honestly, to read kids’ opinions about their parents’ phones and devices – responses (according to research) that revolved around language like “sad, mad, angry and lonely.” Is this really the relationship you want your kids to remember?

Sure, there will be times when it’s been that kind of day, and spending a bit of time on Facebook while they play at the park really does offer you a strategic (and maybe mentally necessary) means of temporary withdrawal. Except how many of us apply this excuse throughout every day? Employ a different, low-tech prop for the days you really need one. Better yet, get up and let you kids see you doing an actual activity that refuels you – doing your own exploration of a park (with them still in full sight), working on some art or coloring (yup, not just for kids anymore), or exercising.

If one of the most disconcerting effects of heavy media use is reduced social skills and nonverbal cue reading, steep your kids in social opportunities. Invite their friends for play dates and sleepovers (just be sure to collect the devices at the beginning and/or ration the tech use). Yes, the onus will likely be on you to host. Give them space and freedom throughout the house with their friends, and they’ll soon find some way to otherwise occupy their time.

Consider becoming a low-tech household (at least for regular but temporary stints).

Here’s where I get a little radical. (This is the fun part in my mind, but others may disagree.) I want people to believe that they can truly upend certain elements of their lives that society treats as givens.

What would it really be like to put all your devices in storage for a weekend…or a week…or a month? How about donating the televisions, dumping cable and/or cutting back the data plans? Would you consider a no-tech vacation? Or how about an intentional power outage?

Come up with a family “experiment” – even better if the kids can help you plan it. Commit to something that stretches everyone’s comfort zone, and make a tradition out of whatever you decided – maybe challenging everyone to “up the ante” a little each time. Talk about how you’ll fill the time with projects, games, outings and other adventures. Your kids might be won over in ways you wouldn’t anticipate.

Thanks for reading today, everyone. How do you deal with screen time in your household? What’s worked for you and those you know. Share your thoughts, and enjoy the end of your week.