What Primal Types Can Learn from Plant-Based Diets (and Dieters) 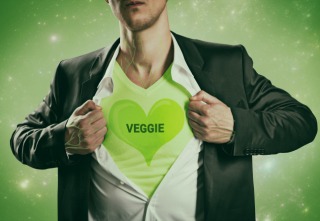 I joke around a lot and give them hell, but I have love and respect for plant-based diets and the people who eat them. These folks come at health from an entirely different place, and, it’s true, I don’t think their diets are optimal. I think they get a lot wrong. They often misconstrue what Primal is all about. I’ve even received threats from some of the less grounded members of the community, though I know that these are the outliers, the extremists, and I never took them seriously.

They can learn a ton from us. That’s true. We can learn a lot from them, too. Today, I wanted to discuss just what I’ve learned and what we can learn from plant-based diets.

How to Maximize Nutrition from Subpar Sources

Being a vegan is hard work. Being a healthy vegan is even harder. We Primal types have it easy. We can really let the nutrient-density fall by the wayside because we can always fall back on a few pastured eggs, a quarter pound of beef liver, some wild salmon, a good steak, some oysters and mussels. Someone on a plant-based diet doesn’t have that luxury. They can’t rely on whey protein or ground beef for high-quality bioavailable protein; they have to combine legumes and grains to get the right mix of amino acids. They can’t get all the zinc and iron they’ll ever need from a half dozen oysters.

They have to comb the literature for nuts and seeds high in each and make sure not to eat too much iron-binding calcium or zinc-interfering copper at the same meal. They can’t eat long-chain omega-3s directly (unless they eat algae); they must make it out of ALA.

Imagine if you ate both high-quality animal foods and maximized the nutrition from plant sources. You’d be unstoppable.

Which Esoteric Leafy Greens You Should Try

There’s a clearly-vegan woman I often see at the farmer’s market. We’ve never spoken about our respective diets (contrary to popular belief, not all vegans immediately announce their dietary ideology), but it’s obvious from the dreadlocks, piercings, waif’s physique, blue/purple/green hair, and (more to the point) basket bulging with green things.

We do talk about what she’s got in that basket though. She’s always digging up the most interesting leafy greens, and I’m quick to ask for recommendations. Without her, I wouldn’t know about star spinach, or purslane (I figured it was just a weed; turns out it’s high in omega-3s, magnesium, and calcium), or sweet potato leaves (I’ve read about their use in Africa while researching for the blog but never actually had them), or the multitude of Asian greens. If you want to move past spinach, kale, chard, and lettuce, ask the only hominids who put down several pounds of leafy greens daily.

Why Low-Carb, High-Fat Didn’t Work For You

I’m on record as claiming that low-carb, high-fat Primal ways of eating are the simplest, most effective way to lose body fat for the most people. Hell, I’m about to release a book predicated on the notion that becoming fat-adapted is great for your health, performance, and longevity. But I’ll also admit that it’s not for everyone. Some people just don’t do well on this type of macronutrient ratio. And that’s fine.

In her excellent presentation at AHS14, entitled “Lessons from the Vegans,” Denise Minger explained how some people who don’t thrive on low-carb, high-fat can actually prosper on low-fat, high-carb diets. But here’s the catch: They should be truly low-fat, as in sub-10% of calories from fat. Anything more, Denise cautions, and you run the risk of entering no man’s land where both fat and glucose metabolism are dysfunctional. The best example of this is the standard American diet, which contains moderate amounts of both (unhealthy) fat and carbs and fails miserably on all fronts.

It’s definitely not for me, and it won’t work for everyone or most, and you’d probably need to include animal foods, but you could put together a decent low-fat diet by sticking to Primal sources.

How Cruel Industrial Animal Agriculture Is

Animal well-being matters to us, but we often couch our distaste for CAFOs (concentrated animal feeding operations) in the substandard nutrient content of their products. Makes sense that we’d worry about the nutrition, since we’re eating so many animal foods. But there’s another reason that we shouldn’t forget.

And your average plant-based dieter certainly won’t let you forget that some of the industrial animal operations are truly repugnant. Chickens crammed in cages, beakless and miserable. Cows standing knee deep in their own manure. The actual killing is probably the most humane part, as the vast majority of animals are stunned or otherwise rendered unconscious before being killed and butchered. But the life of a CAFO animal is quite miserable. If anything, it’ll bolster your resolve to seek out sustainably-raised, pastured/grass-fed animal products whenever you can.

Pretty Much Everything to Do with Poop

This is one of the more perplexing habits of most plant-based dieters I’ve encountered. They love waxing poetic on defecation and exploring the day-to-day variations in consistency, frequency, texture, odor, and volume. It’s really something to behold. I almost suggest spending a day in the local vegan cafe just to eavesdrop.

But if you can bear with it, you might indirectly learn about the importance of gut health. A large percentage of poop, after all, is made up of gut bacteria. And if plant-based dieters are proud of the prominence of their feces, they may be doing something right on the gut bacteria front.

Several years back, the media made a huge fuss over a study that claimed to show plant-based diets lead to better gut health and gut biome diversity than diets containing meat. The “meat diet” was a bit of a strawman in that it contained nothing but cheese and cured meats—no fiber at all—but the fact remains that the plant-based diet resulted in a diverse, apparently healthy gut biome.

Take that to heart, and eat some fibrous plant matter. Nothing’s stopping you from enhancing your omnivorous diet with loads of plant matter and fermentable fiber.

How to Prepare Legumes

Legumes are kinda back on the Primal menu. Go read the post, but here’s the gist:

They’re quite nutrient-dense, containing lots of folate and minerals.

The lectins they contain are usually deactivated by soaking and/or cooking.

But you’ve been away so long that you probably don’t know how to prepare them. I’ll admit that I don’t really know either.

Check out some vegan blogs for tips and recipes. They rely so much on legumes for the protein content that they’re far more likely to understand the ins and outs of legume preparation and cooking.

You can easily modify the recipes to make them meatier. Add a ham hock or some salt pork (basically, just add pig parts). Use bone broth instead of activated Nepalese rainwater (or make bone broth using the rainwater).

That Humans are Incredible

Take most other animals and put them on a weirdo diet that strays from their biological foundation, and you’ll have a whole bunch of dead animals in a few weeks. They’re fragile. They’re rigid. Dogs could do all right, but that’s because they co-evolved with humans for tens of thousands of years. And the omnivores like bears would do okay on a range of diets. But gorillas? Pandas? Tigers? No way.

Humans can eat just about anything. From Inuit to tropical hunter-gatherers to Swiss dairy farmers to ketogenic dieters to Pacific Islanders to Incan potato farmers to kale-eating highlanders, the range of viable human dietary practices boggles the mind.

No diet is more evolutionarily novel than the vegan diet. There are no known records of successful or even factual vegan groups living before last century. Vegetarian, sure. Vegan for a short period of time due to food shortages, of course. But full-time elective vegans? Nope. It just didn’t happen.

Yet, there are successful vegans living today. Healthy ones. I might think they can all benefit from an oyster or an egg or a piece of liver or two every now and again, but they’re out there and they exemplify the stunning adaptability of the human animal.

So, head down to the local vegan cafe and grab a salad or a bowl (most vegan places hate industrial seed oils as much as we do). I can honestly say I’ve had some genuinely fantastic meals at vegan restaurants.

Talk to the vegan clerk at the health food store for some tips on new veggies to try and how to prepare them.

Pick the brain of the ripped vegan lifter at your gym. What’s his or her secret?

Above all else, don’t ignore good advice and wisdom because of the source. The Primal Blueprint is an opportunist’s way of eating and living. We take what works from ancestral traditions, present-day populations, and modern science to form the best possible lifestyle. That list of influences has to include plant-based dieters—because every group with any kind of success (well, almost every group) has something to offer.

That’s it for me, folks. I think those are some very important lessons, but I’m sure there are more I missed. What have you learned from plant-based diets and dieters?

Thanks for reading and take care!

How to Start Eating Meat Again: Transitioning Away from Vege...