What Is the Experience of Awe and Why Does it Matter? 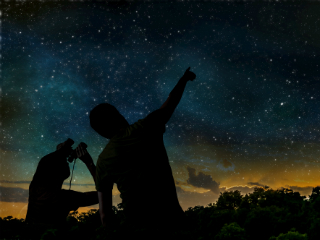 I camp mostly for the stargazing. Everything else is important, of course. The campfire, the smoky bacon, the muddy coffee. Trees, fresh air, endless trails. All great. But what I look forward to most of all is slipping out of my tent on a dark, moonless night, finding a clearing in the trees, looking up at the sky, and realizing that light from a star that shot out a hundred thousand years ago is only just now hitting my retina.

Awe is what John Muir felt when he came up over that ridge to see the Merced Valley laid out below on his first High Sierra excursion, or inched out along a narrow granite ledge behind Yosemite Falls to watch thousands of gallons tumble past his face every second.

Awe is what Oppenheimer conveyed in his response to seeing the first atom bomb—his creation—tested: “I remembered the line from the Hindu Scripture, the Bhagavad-Gita. ‘Now I am become Death, the destroyer of worlds.'”

Awe is what the first humans to reach Australia likely felt when they stumbled upon a fantastical world of 1000 pound flightless birds, 20 foot lizards, and 10 foot kangaroos.

Awe is what astronauts invariably report feeling upon seeing Earth from orbit.

We’ve all felt something similar. Describing the types of experiences that induce awe isn’t hard. What’s hard is describing the feeling itself. It’s almost beyond words.

Researchers Jonathan Haidt and Dacher Keltner have proposed a description, what they call the “prototype of awe” (PDF): perceived vastness and induced accommodation. But what does this mean?

Perceived vastness: For a stimulus to provoke awe, it must be vast, larger than life, and certainly larger than you. This can be true in a physical (Grand Canyon, skyscraper, monster wave) or metaphorical (piece of music, religious text, rousing speech, opening crawl of Star Wars) sense.

Induced accommodation: Because an awe stimulus is bigger than you and transcends your normal frame of reference, you must shift your worldview to accommodate the experience. Folks who report feeling awe use words like “earth-shattering” or “changed how I saw” or “I’d never realized” are coming to terms with induced accommodation. If you don’t come to terms with the new reality, it’s terrifying, so you’re compelled to integrate it.

My dogs probably love hiking more than I do, but they don’t stop at lookouts to take in the scenery. They don’t feel awe. Why do we? What’s all this about?

There are several possibilities as to why awe arose.

Haidt and Keitner suggest awe developed in humans to enable hierarchies. If low-status people were “in awe of” higher-status people, the latter could become leaders and maintain social cohesion. Faced with immense power (“vastness”), the lower-status people would need the capacity to accept lower status (“induced accommodation”) without causing strife.

According to another hypothesis, awe arose because it allowed humans to process and accommodate novel information and experiences. Organisms that can handle and integrate major disruptions to their world view are more likely to survive and adapt.

Or it could just be a necessary byproduct of higher cognition. Awe is part of being a big-brained talking ape.

Whatever the reason for its evolution, experiencing awe has several interesting effects on how we think, feel, and even heal.

Astronauts looking at Earth from orbit frequently report a sense of kinship with their home planet. They truly want to protect it from environmental degradation, not just buy a Prius and make sure the recycling bin’s full every Sunday. Human foibles are rendered inconsequential (“we shouldn’t be killing and fighting”; “you’re small compared to everything else”) in the face of such vastness. A series of studies found that awe makes the self “smaller.”

In a recent UC Berkeley study, subjects standing in a grove of eucalyptus trees who experienced awe increased their prosocial behavior—they were more willing to give—and reduced their sense of entitlement.

Studies find that people exposed to awe-inducing stimuli feel less pressed for time (PDF). They grow more willing to donate time (but not money) to help others. Time scarcity, perceived or real, is a serious condition in the modern world that increases stress, limits our ability to focus on the present moment, and increases unhealthy behaviors (there’s no time to cook or go to the gym!). It becomes a self-fulfilling prophecy where we spend so much energy fretting over the scarcity of time that we run out of time to do anything. Anything that reduces time scarcity will improve your quality of life. In my experience, the biggest moments of awe stop time altogether.

In a 2010 study, researchers examined the effects of different mood states on a subject’s ability to discern good arguments from bad ones. Compared to amusement, anticipatory enthusiasm, and attachment love, awe reduced persuasion by weak arguments.

Time and time again, awe appears to reduce our sense of self, increase our connection to the world and its inhabitants, and expand time perception, if only for a few moments.

The coolest thing about this research is that it doesn’t take much to elicit awe. To study awe’s effect in people, the researchers aren’t taking their subjects to the Grand Canyon to take in the view, or big wave surfing, or scuba diving, or anything amazing. That’s too expensive. They’re showing them commercials for LCD TVs that feature waterfalls and astronauts, or having them stand in grove of eucalyptus trees on the Berkeley campus. And they’re still getting these results. Imagine the real thing.

You look into your infant child’s eyes, opening for the first time. The kid is defenseless, physically tiny, not at all imposing, and certainly not vast. But he does inspire awe. He’s the 50/50 genetic manifestation of you and your partner. And boy do you have to shift your reality to accommodate this new human.

Awe isn’t necessarily positive. Watching those jets crash into the Twin Towers certainly inspired awe, but also terror. You knew that everything was going to be different, that you were looking at history unfolding itself before you.

Awe doesn’t require trekking out to a national park. Small moments can work, too. They’re all around us. You just have to pay attention. In a future post, I’ll get specific with tips, tricks, and examples.

Let me know down below how often you experience awe.

New and Noteworthy—What I Read This Week: Edition 136