Dear Mark: When Walking Is No Longer Enough; Fermented Foods and Depression 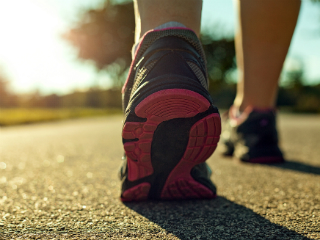 For today’s edition of Dear Mark, I’m answering two questions. First up, what happens when a brisk walk isn’t enough to attain the optimal fat-burning heart rate zone? It’s a good problem to have—better fitness—but it still needs a response. What activities can a person do to slightly increase the intensity without going over the target heart rate? And second, are fermented foods a potential cause of depression? If they have any effect on serotonin, could this cause problems rather than improvements?

I love walking and have lost 65 pounds over the last year and a half with that, combined with some basketball and, of course a primal diet. But walking no longer gets me into my “180-my age” range anymore, my heart rate stays 110 or so even at 4 mph. Running/jogging hurts my knees, so should I try the elliptical for my aerobic work, or just stick with fast walking even at a lower heart rate? Thanks and love the blog and podcast!

The good news is that you’re officially fitter than when you started. If you’re able to walk at the same pace with a lower heart rate, you’re building that aerobic base, those new mitochondria. You’re becoming fat-adapted. Nice work.

The bad news (that isn’t really bad news) is that you’ll have to step it up a bit. But here’s another piece of good news: the “harder” work will only be as hard as walking used to be at your old heart rate because you’re more efficient at burning fat and you’ve got all those new mitochondria to play with. This is how an aerobic base opens up new doors and promotes the exploration of new types of movement. If last year a 5 mile uphill hike made you wheeze with regret, today that same hike will be a breeze. You’ll actually get to enjoy yourself, take in the views, and hold a conversation. The physical effort will be an afterthought.

That’s why the aerobic base is so important even for regular folks and non-elites: it improves your default mode of transportation. If before a slow walk along a sidewalk was as fast as you could go and still be comfortable, now a fast walk is your default. Your new normal becomes faster, better, stronger.

As for what you can do to hit that heart rate?

The elliptical is okay. I’m not a big fan, personally, especially for the high-volume, low-intensity movement you’ll be doing. The treadmill’s linearity is bad enough. Ellipticals are totally linear. Your movements literally follow a track, forcing repetition and replication. Any repetitive motion adds up. Sprinting on an elliptical? Sure. It’s over in a jiffy and provides the desired stimulus.

Try rucking. Load up a backpack with books and walk around wearing it. Start small, maybe 10-15 pounds. Move up as dictated by your heart rate. If things get heavy, use a pack with a hip belt to redistribute the weight. Weighted vests also work well here.

Do you have any hills near you? Go walk them.

As for the machines, an inclined treadmill can work.

Rowing is great. Just keep it nice and leisurely, like you’re a 19th century Manhattan fop taking his sweetheart out on the pond. Wouldn’t want to sweat through your linen suit.

Skipping is great, too. Kids know what they’re doing. If skipping’s too intense, skip for 10 paces, walk for 20.

Swimming, too. Don’t forget about the pool.

Anything works. Just explore the different types of movement and watch your HR.

Fermented foods, like kefir and kimchi, are often praised for their health benefits, one of which is their affect on serotonin and mood.

I’m wondering, concerned even, about possible long-term effects like serotonin depletion. This is something I observe in myself after prolonged periods of enthusiastic coffee consumption, short-term indulgences with wine, and (unfortunately) even a single dose of 90% dark chocolate. It also something I’ve read about in association with BCAA supplementation.

Should we be wary of a daily kefir habit too?

There are some strange things going on with serotonin and depression. It’s not a straightforward relationship. The common “neurotransmitter imbalance” model of depression where low serotonin causes depression isn’t quite accurate and has little actual evidence to support it. Anti-depressant drugs and supplements that don’t target serotonin, as well as non-pharmacological interventions like exercise, may be more effective than SSRIs against depression. If SSRIs work, it’s probably not by “increasing serotonin.”

The evidence is quite clear, though: fermented food intake is usually associated with low rates of depression in humans, not high rates.

Among Spanish university students, high-fat yogurt (but not low-fat yogurt) is protective against depression.

A recent trial in humans even found that a multi-species probiotic supplement made subjects more resistant to sad moods. These were healthy humans, not depressed ones, and depression is more than “sad mood,” but it’s promising.

The serotonin/fermented food question is up in the air. I’m not convinced, personally. But we have a conceivable mechanism by which fermented foods might exert protection against depression: improved gut health.

Leaky gut is common and seems to play a pathophysiological role in major depression; up to 35% of depressed patients have leaky gut. If your gut is too permeable, bacterial endotoxins/lipopolysaccharide (LPS) gain admittance to general circulation. And at least in mice, LPS induces depression.

I don’t think you should worry about this until it actually becomes a problem. Keep drinking that kefir and fermenting that cabbage.

That’s it for this week, folks. Now let’s hear from you.

Anyone had depressive symptoms worsen with fermented food intake? Improve?

What else can Vance do besides walk faster?