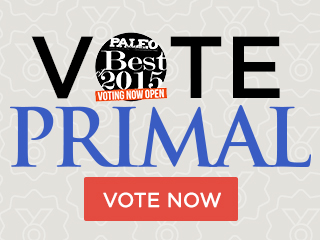 Perhaps it’s the competitive spirit left over from my marathon and triathlon days, but I love a good contest. And it’s that time of year again where Mark’s Daily Apple competes for the title of Best in Paleo Magazine’s Best of 2015 issue. And this year, Primal Kitchen is up for some awards too. But we need your help to make it happen.

Here’s a little bit of backstory if this is your first year taking MDA to the finish line. Paleo Magazine is the premiere print and online subscription publication for all things paleo, primal, and ancestral health. Every year, Paleo Magazine holds an open vote for the world of paleo/primal aficionados to pick their favorite examples of companies, products, forms of education, and entertainment that are the most cutting edge, relevant, and noteworthy representations of the community. Being on this list means you’re recognized as the cream of the ancestral health crop. And we want Mark’s Daily Apple and the subsequent resources it provides to be recognized for what they are: the leading examples in the ancestral health community!

And this year I need your help to beat our record.

Here are the categories we’re competing in:

So click here to head on over to the Paleo Magazine voting portal and cast your vote for Mark’s Daily Apple and Primal Kitchen, as well as your other favorite primal and paleo resources.

Paleo Magazine is also offering a special discount on a 1-year print and digital subscription for those who vote! You’ll get the promo code once you submit your voting form.

Thanks for the support. I’ll keep you posted about the results!