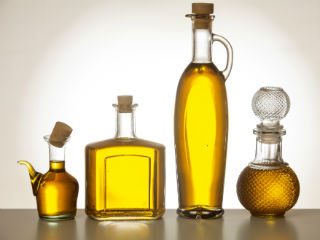 Many years ago (I initially wrote that in jest, but it has been almost seven years), I wrote a definitive guide to oils, covering the benefits and drawbacks of over a dozen of the most common edible oils. Seven years is plenty of time for new data to come out, new perspectives to develop, and even new oils to hit the market. How would I go back and update my previous recommendations?

Most of it stands. The fatty acid breakdown and overall assessment of each oil remain valid and sound. Olive oil is still olive oil (unless it’s not). 2016 peanut oil is identical to 2010 peanut oil. If you’re interested in the basics or want to see my 2010 take on edible oils, go ahead and read through the Definitive Guide to Oils.

The reason for my recommendation that people avoid making most oils a large part of their diet also stands: they contain too much linoleic acid, a fragile fatty acid that becomes inflammatory when exposed to heat and creates oxidative stress when incorporated into our cell membranes and lipoproteins. The historic human diet contained very little linoleic acid; the modern industrial diet contains excessive amounts, mostly thanks to our reliance on these oils.

Everything compelling us to avoid vegetable oils lies downstream of the linoleic acid issue.

Rancidity: Higher PUFA oils are more prone to rancidity. Unless they were pressed yesterday into amber-colored bottles and shipped in cold storage, most high-PUFA vegetable oils arrive with some degree of rancidity.

Fragility: Linoleic acid has a bad tendency to oxidize when exposed to heat. Since these oils are being used in deep-fryers, sauté pans, and processed (cooked) food all over the world, the majority of the linoleic acid people consume has been partially oxidized.

Lack of historical precedent: Our current levels of linoleic acid are without precedent. Before industrialization, we had neither the means nor the need to extract edible oils from soybeans, canola, and other high-linoleic seeds. In 1909, we got about 2.7% of our calories from linoleic acid. By 1999, it was 7.2%. I have to imagine it’s even higher today.

Even the supposed benefits to heart health linoleic acid provides haven’t held up to close scrutiny. Uncovered data from the ancient studies used to support this idea show that replacing saturated fat with linoleic acid-rich oils give no benefit. If anything, it’s actually worse, reducing cholesterol (“good”) and increasing mortality (unequivocally bad).

And so when we talk about “limiting vegetable oils,” our main beef is with the linoleic acid content. It’s too fragile, it’s too ubiquitous, and it fails to deliver the promised benefits.

What if vegetable oils weren’t so high in linoleic acid? Producers are increasingly breeding “high-oleic, lower-PUFA” versions of many oil seeds, including canola, soybean, sunflower, safflower, peanut, and even corn. These newer varieties have more monounsaturated fat and far less polyunsaturated fat than the standard oils. Some have fatty acid profiles rivaling olive and avocado oil.

Does it matter? Are these oils actually healthier than their high-linoleic counterparts?

Corn oil: Compared to others oils, high-oleic corn oil produced the fewest polar compounds (a measure of lipid oxidation) in response to 20 hours of frying at 190 °C.

Soybean oil: The only human study I found showed that compared to other types of soybean oil, high-oleic soybean oil results in greater increases in HDL. Whatever you want to say about the reliability of using lipid numbers to divine health status, higher HDL is pretty much always a good thing.

Sunflower oil: High-oleic sunflower oil is extremely stable in frying conditions, with any instability being attributed to its linoleic acid content.

Peanut oil: Eating high-oleic peanuts improves cognitive and cardiovascular function in overweight adults. It wasn’t the isolated oil, so other peanut components could have played a role.

Now, these aren’t healthy oils. These are still refined oils largely depleted of the phytonutrients that naturally occur in the seeds, and they’ll still be used to create shelf-stable junk food and deep-fried fare. But at least they’re no longer actively unhealthy. They can become neutral cooking vehicles to be used for good or evil. All in all, I think widespread replacement of high-PUFA oils with high-oleic versions will bring huge benefits to everyone:

If you replaced the high-PUFA corn and soybeans given to pigs and chickens with high-oleic version, we’d see huge improvements in poultry and pork fatty acid composition. One study found that adding high-oleic sunflower oil to pig feed produced lard that was more resistant to oxidation. Another found the same thing happens in chickens given high-oleic sunflower feed.

Restaurant food wouldn’t be so bad. You could actually enjoy McDonald’s fries again as a treat.

People who can’t afford (or don’t know the difference) healthier food won’t be jamming so much oxidized linoleic acid into their mitochondrial membranes.

College kids grabbing a burger and fries at 2 am after the party lets out won’t be flooding their ethanol-compromised livers with linoleic acid that makes the hepatic situation worse.

Pregnant women who can’t stomach anything but processed junk in the first trimester won’t be constructing their future children out of rancid vegetable oil.

Folks who can’t drop $25 on a skinny pastured chicken can pick up a standard-issue fryer for $10, roast it, eat the crispy skin, and use the drippings to cook root veggies without worrying about their LDL particles filling up with linoleic acid and oxidizing.

And many of the high-oleic seed oils, like corn, soy, canola, sunflower, and safflower, tend to be highly processed. Whereas you can crush an olive or smash up some coconut flesh and get plenty of oil, extracting oil from something like corn or soy requires extensive processing and unpleasant solvents.

Certain produces have figured out how to make cold-pressed sunflower, safflower, and canola oils, but I don’t really get the point. Oils are often refined for a reason: the unrefined oil tastes terrible (or at least unremarkable) and contains unwanted compounds, like canola oil’s erucic acid.

These aren’t prized for their phytonutrient constituents. No one’s dipping their crusty French bread into virgin canola or going to safflower oil tastings. They were chosen simply as a cheap source of (somewhat) edible fatty acids. Going high-oleic doesn’t change this.

But it’s undoubtedly a positive development. Let’s hope the food and agricultural industries take note and adopt the high-oleic varieties.

For now, speak out. Ask your local restauranteurs if they know about high-oleic oils. Email the chains. Talk to the chicken guy at the farmer’s market—what’s he feeding his flock? Express interest.

Will Saturated Fat Kill Your Cells?