This Primal Business Gets Better and Better

I don’t have a significant transformation to share. I guess that’s why I never thought about writing in but I’ll give it a shot. I was logging into our company affiliated, heath provider website one day, when I noticed an offhand box on the right saying something like “Never eat these five foods if you want to lose weight!” For some reason I didn’t ignore it like I typically would. It led to a site featuring Isabel De Los Rios and what she said sounded logical and it began to open my eyes. It got me halfway there. I adopted her suggestions and got more interested in the subject. I began noodling around the internet and quickly found Mark’s Daily Apple.

I can picture myself hunched over my laptop with that “Wow” expression on my face. “Holy grass fed cow, this guy makes a whole lot of sense.” I am an engineer by trade and to have all the supporting data, studies and references were and are critical to me. After all those wasted years of avoiding egg yolks, thinking I was all that because I ate whole wheat (with a pompous attitude to boot), and scolding people about the evil of cholesterol, I had to pause for a moment to consider this big change I was contemplating. I remember thinking that if this guy Mark is just some internet wackjob I’m going to be dead within a year by eating this way. But it felt right and I jumped right into the lifestyle. I didn’t find it difficult at all. It’s so much easier if you believe in something and are excited about it. It was a few years ago but I don’t remember having any of the negative symptoms other people report.

And nothing bad happened. I did notice that my total cholesterol went down right at the beginning. The truth is, I have done a boatload of reading since then (for instance I slogged through Peter Attia’s “The Straight Dope On Cholesterol,” until I finally understood it all) and I don’t know what, if anything, those lipid numbers mean. LDL cholesterol may have a correlation to LDL particle count, but it’s unclear to me. Armed with all my new found knowledge, I marched into my cardiologist’s office to impress him with my fancy learning. He was polite and patient but cared not a lick for anything I had to say. He is conventional to the bone and responded by saying he wanted to start me on a low level dose of statins because my LDL cholesterol was too high. I had done enough reading at that point to know there was no way I would take statins. If anybody is aware of a primal cardiologist in the Connecticut area please let me know.

Let me tell you about the things that did happen. First, of course, was the excess weight. Although I was fairly active, I had been trying to lose 20 lbs for a long time but couldn’t do it. Now they came off easily. (Full disclosure; I have gradually put 10 back on and it’s perplexing. I suspect I am not quite as occasional on the dark chocolate as I should be. And some of it is muscle gain.) The next thing I noticed was that the chronic arthritis in my thumbs went away. And then amazingly, I began to sleep really well. What a joy. After decades of lousy sleep I had given up hope and accepted it as part of getting older. I was now sleeping through the night…every night. It was, and is, fantastic.

Although I don’t limit how much I eat, it’s not heaps because I am rarely ever hungry. According to CW I should be roughly the size of a grizzly bear based upon all the butter, bacon, animal fats and such that I joyously wolf down. (Oh chicken skin, how I missed you.) 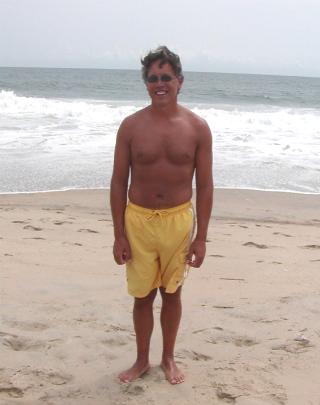 This one blew my mind; I no longer have to use suntan lotion. I was known for not going to the beach unless I was camped out under an umbrella and I would still burn if I didn’t lotion up. Now I’ll stay out in direct sun sometimes just to test it, and the worst that happens is I get a slight tinge that doesn’t hurt and doesn’t peel. After that there is no burning whatsoever. The not so great aspect is that I can no longer get a tan on my torso and I have to walk around the beach with a major league farmer’s tan. I used to be able to tan very easily. Here is a picture to prove it. It’s also my “before” picture.

Speaking of lotion and skin, I have always had to lather lotion on my hands all winter or they get incredibly chapped. This winter I noticed that I hardly had to put any on. This Primal business gets better and better. Finally, if I do catch some type of bug or cold, it seems to me that the symptoms are only half as bad as they used to be.

Did I mention the joy of walking away from running most every day? I ran for years and hated and dreaded every step. Thank Mark alrighty, I am free at last. I was also known for napping in my car every day at lunch. Now I walk instead. This, along with exercise first thing in the morning, seems to do the trick. Before work I mix it up with things like sprints, burpees, rope jumping, body weight stuff, etc. We hike, bike and kayak on weekends. My wife Darlene and I also regularly have epic games of badminton. I have gotten an ultimate Frisbee group together one night a week at work and a foursome to play pickle ball once a week with another group. Like the man says, make it fun. 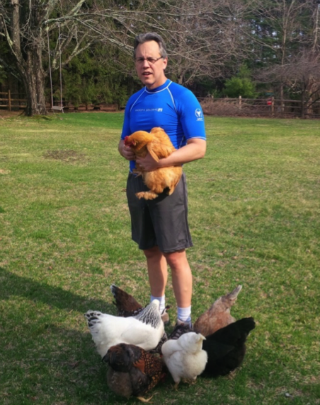 As for food, it’s been not nearly as hard as I thought. I don’t miss pizza or bread and I once thought that would have been impossible. I miss popcorn a tad but even that’s not hard anymore, and I do cheat every now and again. Five Guys French fries are my kryptonite. (Tell me that peanut oil is not all that bad come to think of it and make me a happy man, Mark.) Darlene is partially on board and she prepares terrific Primal dinners. She is not buying into the offal though. We keep chickens now and enjoy them as pets, but we are loving our free range eggs. I got some Exo cricket flour bars and didn’t even hesitate. They were yummy. If there is a world apocalypse one day I won’t even wait until the food runs out, I’m going straight to bugs. (That chicken is not hiding a gut.)

I hunted down a Certified Primal Blueprint Expert here in Connecticut and we are arranging for her to come in and make a presentation for one of our company “Lunch and Learn” sessions. I am really excited about that. I might even bring a batch of my cookies made with macadamia nut flour, yacon syrup and Lily’s chocolate chips. I believe they have to be some of the healthiest cookies in the world. We just tried Primal Kitchen Mayonnaise today and it was as good as I hoped it would be. My lunch most days is real turkey breast in red cabbage leaf with gouda cheese (vitamin K2), and avocado. With the way I eat I get more raised eyebrows than a hippie at a young republicans convention, but it’s okay. My family comes for dinner every week. They are used to eating our Primal meals and are open minded and complimentary.

I am permanently and passionately Primal. I will end with a story to illustrate. About a year ago I was traveling on business. There was very little time between connections and I had to run through the airport like a fool. Well I must have gulped something weird in the terminal air, because when I got on that plane I started a severe coughing jag that I could not control. I was making everybody on the plane uncomfortable. It was bad enough that I was wondering if I should get off for medical attention. In fact, the flight attendants came over and asked if I was having chest pains and were close to booting me off. I wasn’t, but I was a little scared. A nice lady sitting by the window offered me some type of mint candy to help, and even though I wasn’t positive I wasn’t dying, my only thought was “no way am I eating that sugar!”

Thanks so much for what you do Mark!