This Is Your Brain on Bugs: How Gut Bacteria Affect Mental Health 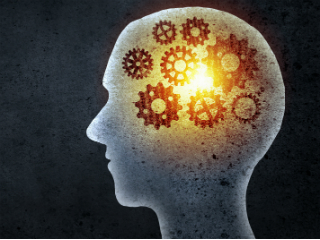 As many of you adopt new behaviors and habits during this year’s 21-Day Challenge, there’s a fascinating unseen story going on between your brains and bellies I thought it’d be worth talking about. New behaviors and habits create new neural pathways, which are essentially new road maps for how you’ll think, feel, and act in the future. Now the integrity of those neural pathways—whether they’re firing at full force and with the right materials to do their job—is intimately connected to something I’ve talked about on the blog before in different ways: our gut microbiome. But as you’ll see, this microscopic landscape is worth talking about again—specifically because it influences your brain (that grand master of all organs) and how well you’re likely to stick to all those newly adopted changes in the future.

Within the human gut lies a “second brain”: a vast network of neurons located along the intestinal lining. It’s called the enteric nervous system—enteric as in “pertaining to the gut”—and for years researchers assumed its sole province lay in regulation of the digestive process. Researchers now know that the enteric nervous system also relays and sends neurotransmitters like serotonin and GABA, responds to emotions, and has a direct conduit to the brain via the vagus nerve.

The gut is not the site of higher-level cognition. The neurochemical processes responsible for writing emails, doing trigonometry, and reading this blog post occur solely in the brain. But though decision-making and conscious thought happen up top, the gut has a lot of input on how those thoughts and decisions develop. About 90% of traffic along the vagus flows from gut to brain, and it’s not all information about intestinal contractions. The second brain is likely the province of instinct, subconscious response, and emotion. In other words, gut feeling, gut instinct, butterflies in your stomach, and got the guts? aren’t just figures of speech. They hint at real physiological processes occurring along the gut-brain axis.

Emerging evidence is showing that our enteric nervous system, and the gut bacteria, probiotics, and prebiotics that comprise and affect it, have effects on how we think, feel, perform, and respond to the world around us.

Depression is an epidemic. More than 1 in 10 Americans over the age of 12 take antidepressants. Yes, there are 12-year old children who have trouble getting out of bed in the morning, worry about their future, and take powerful pharmaceuticals to deal with their clinical depression. Add to that the tens of millions more who may not qualify for major depressive disorder but are just plain sad. That doesn’t seem right. That doesn’t seem biologically appropriate. It makes a person wonder: is the gut involved?

Well, patients with major depressive disorder display a distinctive gut bacterial profile, and lower levels of a specific genus (Faecalibacterium) predict depression severity. And in a recent RCT, a 3-strain probiotic (L. casei, L. acidophilus, B. bifidum) had beneficial effects on the Beck Depression inventory (a way to measure depression) in patients with clinical depression. Reductions in inflammation and insulin and increases in glutathione status accompanied the improvement in depression.

Anxiety is fear. In today’s modern world, we rarely experience truly life-threatening situations. We fear failure, or rejection, or unfamiliar social situations. We’re anxious about people laughing at us, having nothing to say in conversation with the pretty girl. Nothing that’ll kill us, though it can certainly feel like it. The nervous flutter in the gut we get before a job interview used to prepare us for a life-or-death hunt or battle, but it still feels real. Judging from the epidemic levels of anxiety disorders (18% of Americans, or over 40 million people in the US alone), maybe too real.

We can certainly feel anxiety in the gut, but can changes to the gut biome actually affect anxiety?

GABA, or gamma-aminobutyric acid, is a “chill out” neurotransmitter. It reduces neural excitation. It induces sleep. It lowers anxiety. Most anti-anxiety medications, whether over the counter (alcohol) or prescribed (Xanax), work by interacting with GABA receptors in the brain. Certain strains of gut bacteria produce GABA, while other bacteria seem to increase GABA receptors in the brain.

For example, mice given L. rhamnosus were more relaxed than control mice. They produced less cortisol in response to stress and showed a greater density of GABA receptors in the brain. A portion of the probiotic mice with their vagus nerves severed were no more relaxed than the control mice, suggesting that the anxiolytic effects of L. rhamnosus depend on gut-brain communication.

Another study found that feeding gut bacteria with specific prebiotics reduced negative emotional bias and lowered cortisol (a stress hormone). People who took the prebiotic (Bimuno-galactooligosaccharides, or BOS) focused more on positive stimuli and were able to ignore negative stimuli in a test of emotional bias. These tests are typically used to track anxiety, as anxious people are more likely to focus on negative imagery, and the BOS group showed similar results to people taking anti-anxiety meds.

Earlier this year, a study reported that the greater the intake of fermented food like yogurt, kefir, kimchi, or sauerkraut, the lower the incidence of social anxiety. This relationship was strongest in people with a genetic tendency toward neuroticism.

Food intolerances, diarrhea, constipation, leaky gut, irritable or inflammatory bowel disorders and other gut problems frequently accompany autism/ASD. Gut biome profiles reveal striking, consistent differences between people with and without autism. For years, reports from parents of children with ASD of major benefits through probiotic or gut-centric therapies were dismissed, but the evidence is becoming difficult to ignore. According to one recent n=1 report from a father of an autistic child, a ten day course of amoxicillin for strep throat improved autism symptoms.  It’s unclear if the antibiotic was killing off ASD-promoting bacteria or whether the kid’s results would even apply to others (some researchers think antibiotics can cause certain types of ASD), but there’s something going with the gut and ASD.

A mouse study suggests the potential efficacy of certain probiotics. Pregnant mice were injected with mock viruses to stimulate an immune response and produce autism-like behavior—obsessive grooming, poor communication and vocalization, difficulties socializing with other mice—in the offspring. The offspring had leaky gut and 46-fold higher levels of a gut bacteria metabolite chemically similar to one found in the urine of autistic humans. After supplementing with a B. fragilis probiotic for a couple weeks, ASD-like mice were less obsessive (they stopped burying marbles in their cages) and their leaky guts improved, but they still had trouble socializing with other mice.

When you’re driving home from work and your normal route is suddenly cut-off, what do you do? Imagine you don’t have Google Maps with you. Imagine you have to find a new path home. People who can easily figure out a new route home, switch between conversations with two different people, or move from task to task have good cognitive flexibility. It’s the ability to pivot from one thing and to another without losing focus in the process, and it’s becoming increasingly important in today’s world.

In one recent study, researchers placed mice on different diets, tracked the diets’ effects on gut bacteria, and tested the mice’s cognitive flexibility. Mice on the western-style diets (high-sugar, high-industrial fat), who showed higher levels of Clostridiales bacteria and fewer Bacteroidales bacteria than control mice, performed poorly on the tests. They were able to navigate the initial maze, but once the maze was flipped they could not.

Bad things happen to everyone. We’re going to encounter stressors and feel negative emotions. That’s life. Schools of mindfulness suggest acknowledging the emotion, then letting it go. Practice non-judgmental awareness, they say. Or more colloquially, “it is what it is.” Whatever you call it, the key is to not let these negative emotions rule us. Our responses to the emotion are the emotion. Do we dwell on sadness, recycling and amplifying it? Or do we feel sad and move along, giving no extra thought or credence to the emotion? I’d argue that our cognitive reactivity to negative emotions and stressors determines our propensity to, well, be sad and stressed out—and gut health plays a role.

In healthy women, taking a fermented milk product containing the probiotics B. lactis, S. thermopilis, L. bulgaricus, and L. lactis twice a day reduced emotional reactivity to a series of images of facial expressions. Whether they viewed smiles, frowns, grimaces, or any other human facial expression, the yogurt-eating women were more objective about it.

It’s all very impressive, isn’t it?

Now, a couple caveats are in order before you start megadosing L. rhamnosus, hunting down the fermented milk product used to reduce emotional reactivity, or making BOS pancakes.

As you may have noticed, neither I nor the researchers make many unequivocal statements. This is confusing stuff. We’re wading through largely uncharted territory. There’s no definite way to “cure” autism or depression or anxiety or increase mental performance through probiotics or prebiotics. There are dozens of things that affect our gut bacteria. Some will also affect our cognition and mood positively, others negatively.

One recent paper, for example, found a resistant starch-based diet increased anxiety in mice navigating an open environment. RS-fed mice explored less and even spent less time rearing their young, behavior changes that were accompanied by concomitant alterations to the gut bacteria. Resistant starch is generally helpful, but too much at the wrong time in isolation when you’re astrally projecting into your murine avatar may apparently have unwanted mental effects. The same thing could be true for any of the probiotics or prebiotics mentioned in today’s post, especially once you get into pharmacologically-active dosage territory.

The exact mechanisms by which a focus on gut health can improve mental health are still unknown.

Maybe bacteria-produced neurotransmitters like dopamine, serotonin, and GABA are talking to our neurons along the enteric nervous system and sending messages up the vagus nerve to the brain.

Maybe we’re reducing gut inflammation and tightening up leaky gut—both of which are associated with increased anxiety and depression.

Maybe we’re restoring the ancestral ecology of our guts and reducing immune hyper-reactivity.

I suspect it’s all of the above.

Whatever the case, just be smart and sensible.

And whatever you do, listen to your gut. It’s a lot smarter than you think.

Thanks for reading, everyone. Take care and I hope the challenge is going well!