The Power of Food Rituals 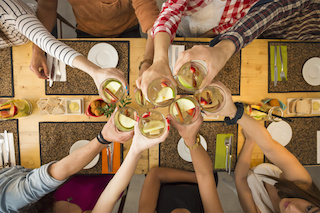 From the intricacy of Japanese tea ceremonies to the ornateness of holiday dinners, food related customs hold big sway in every culture. They all reflect in some way an element of that culture’s values and common story—whether long inherited or deliberately chosen. While some of our rituals can be traced to particular religious traditions, others are more secularly instituted, family oriented or even individually constructed. Those grander social customs might evoke more conscious nostalgia, but science suggests even the small practices we enact around our eating can have surprising results.

Food ritual, of course, is literally written in our genetic expectations. In fact, how meat in particular was cut and shared over hundreds of thousands of years has been a central clue in how anthropologists track cultural evolution. Relics of early human culture highlight the magnitude of it. From the use of certain kinds of dishes for particular foods and drinks to the thoughtful, extravagant spreads for communal feasting, for example, shared food ritual came before the Agricultural Revolution, serving then (and today) as a integral tool for establishing and maintaining social cohesion.

But the impact isn’t just social….

Those who performed the ritual (literally just dividing and unwrapping a chocolate bar a certain way) reported more satisfaction from the eating experience. They not only assessed the chocolate as more tasty, but they took longer to eat it and reported being willing to pay more for it.

A second experiment revealed that a longer delay between ritual and eating enhanced the experience of the food further still. Even with carrots, the subjects reported enjoying the taste more after the longer ritual-delay interval. (Maybe Aunt Sylvie’s drawn-out prayers over the holiday dinner aren’t so bad after all.)

It’s important to note is that participation in the ritual was necessary as is “intrinsic interest.” It’s not enough to observe someone else do something (e.g. carve the turkey) or to do a ritual expecting an extra reward (e.g. “If I make myself bless the food I’ll let myself have an extra dollop of cream on my pie.). We have to let ourselves perform the practice for practice’s sake. This means letting go of the incessant distractibility, our reductive utilitarianism and our modern cynicism.

In fact, research on ritual suggests the more elaborate our rituals, the more effect they have on us. It’s just a hallmark of the human mind. As researchers explain, “[T]he characteristics of ritual are the product of an evolved cognitive system.” What appeals to our imagination often has more power than what addresses our intellect. Ritual, scientists have observed, is used by both animals and humans to alleviate anxiety.

Our modes of engaging with our experiences include more than strict empirical reasoning. They call upon eons of human history in which ritual evoked peace, belonging and safety. We’d do well to learn from traditional societies’ (and some contemporary religious groups’ flow experience with ritual. It’s not about the particular stories behind these but the universal forms our species evolved with.

And it has the power to reframe our relationship with food as well as pleasure.

Interested in seeing what they can do for your enjoyment, ease and fulfillment? (That’s the good life after all….)

Start simple by appreciating the ritual you already practice. Do you set the table a certain way? Do you make your coffee or tea way? Do you bring certain habits meals or meal prep? There’s a reason cooking can be a meditative art for some people. For all our focus on convenience food, we deny ourselves more than we know by scarfing down sandwiches in parking lots or grabbing plates so everyone can retreat to their separate corners of the house.

Just go with what you believe would add to the enjoyment of your food that’s about your own behavior rather than the food itself. Another irony of modern life: we’ll pay insane amounts of money to bring home five star food but give ourselves a zero star eating experience. Everyone’s personal taste varies, but this principle holds: bring mindfulness to the table first. It’s the difference between letting yourself receive the food versus unconsciously inhaling it.

As you sit down with family for the holiday, why not resurrect old (and funny) mealtime patterns from your early years. Take time for whatever prayer, blessings, story sharing or pre-eating custom has meaning for you and your family. If the typical religious practices aren’t your thing, hold hands and ask each person to go around and say something they’re grateful for this year (do we seriously need to limit gratitude Thanksgiving?) or read a poem, sing something or even simply observe a minute of silence together. What practice would get everyone involved and celebrate the community preparation to eat?

Thanks for reading, everyone. What food rituals have you observed—in the everyday sense or within holiday celebration? I’d love to hear your thoughts and practices. Have a good end to your week.