The Personality Factor: How Does Introversion or Extroversion Interact with Well-Being? 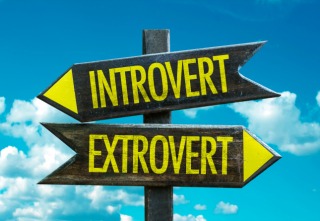 Sometimes it seems like this world is built for extroverts. The most successful politicians, entertainers, and public figures are (or at least come off as) extroverts. One of the “Big 5” personality traits we use to judge and praise people is extraversion (Introversion, falsely assumed as simply the lack of extraversion, doesn’t merit mention.) Certain studies suggest that extroverts make more money than introverts, on average. Extroverts tend to be happier than introverts, regardless of the cultural context. Introverts are more likely to suffer from depression and asthma.

On paper, it seems like extroversion is the clear evolutionary winner. It makes you happier, wealthier, and even healthier (maybe). It’s selected for in many of the most public spheres, like entertainment and politics. So why has introversion been so well preserved? Why do introverts, by most accounts, still comprise at least 25% of the population?

If you could construct the perfect human to innovate, explore, and conquer the world, understand and capitalize on its natural laws, and create powerful technology, you’d insert both adventurousness and circumspection, gregariousness and studiousness. You’d want a balanced person with the capacity to lead, inspire, engage, and act decisively—while also thinking deeply, ruminating, and planning ahead. Few of these superhumans exist, sadly. Those that do tend to excel.

And what makes for a healthier, more successful tribe?

Introverts are more cautious on average. They plan their moves, weigh their options, and often find socializing draining.

In difficult situations, extroverts are better at recruiting different parts of the brain to devise a quick response. Introverts respond relatively slowly to immediate stimuli, but they make up for it with an affinity for deep, focused work and abstract thought.

Getting the right blend of introverts and extroverts in your group imbues the superorganism with the qualities necessary to excel and dominate. You have the planners and the doers. The adventurers who throw caution to the wind and those who warn against foolhardiness.

This isn’t a binary relationship. Introversion and extraversion exist along a spectrum. Most people have elements of each, and the relative propensity appears to be hereditary.

On one level, the world caters to extroverts. We know this from an early age. Introverted toddlers hear “oh, aren’t you shy?” no less than a million times before they reach grade school. Schools stress the importance of “group work,” and often force it on students. The modern school itself is an evolutionary aberration where children are segregated by age and too often have all agency stripped from them.

But the world is also changing. Technology is opening new doors and changing the way we do business (and even life to some extent). There are more opportunities than ever before, and entrepreneurs are taking advantage. Creativity has perhaps never mattered more. Many of the greatest minds were introverted. People value—and deeply need—introverts who can hunker down and do the hard, deep work.

I’m a bit of an introvert. And I’ve done pretty well for myself.

I can give talks and presentations. I can mingle at parties and conferences. I can and do run a business (or three). I do great in small or even large groups of people.

But I need to recharge. I need my alone time. I prefer the company of small groups of close friends and family. I love a good book. I require regular infusions of nature-tinged solitude.

In my experience, there are introverts who accept their disposition, who optimize its strengths and work with its needs, and introverts who deny their nature. The former are happy, well-adjusted, successful, and completely comfortable in their own skin. The latter are lying to themselves. They pine for extroversion and suffer needlessly because of it.

So that’s the first step. Whether you’re more extroverted or more introverted, own it. Accept who you are.

Being an MDA reader, you’re probably wondering how extroversion and introversion can affect your health and life. What are the practical implications of being introverted or extroverted for well-being?

There’s not a ton of great definitive evidence. But we can make a few guesses based on what evidence exists. Regardless, I think there’s potential for some deep and insightful discussion.

I’d say there’s a lot to unpack here—brain activation in relation to stimuli, emotional processing, motivation approach, etc. While it’s an intricate picture I think we’ll never fully get to the bottom of, it’s good to know we always have fodder for deeper research…and future conversation.

Thanks for reading today, everybody. Here’s where I turn it over to you—where I think anecdotal experience can help augment hard science’s assessment of complex “soft” science questions. Do you consider yourself an introvert or an extrovert (or ambivert—some combination of both)? How has this experience or perception influenced your health choices and life decisions? What resources or questions have been most insightful for you? Take care.