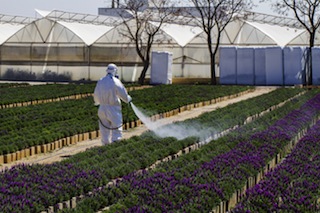 For today’s edition of Dear Mark, I’m answering three questions from readers. First up, a Forbes columnist recently penned an anti-organic agriculture screed. In it, he makes the oft-repeated claim that organic is just a scam and really no different from conventional produce. Is he saying anything new — or useful? Should we avoid the often higher price tag of organic produce? The second comes from Susan, a healthy and active 70 year-old without any complaints — except that a midday nap is starting to sound more and more attractive every day. Could her low salt intake be the cause of her midday fatigue? Maybe. Next, what’s my take on Weston A. Price? How do his nutritional guidelines jibe with the Primal Blueprint?

I am a loyal podcast listener. I grew up a 6th generation farm kid from Iowa and am a supporter of American Agriculture. I know a lot of people hear a lot of misinformation about the American Farmer and how much they make; however, I am not a farmer today simply because our farm (1300+ acres, pork production, beef production) cannot support more than one family. Since I am the third born… Anyway, as I have been studying I hear a lot regarding GMOs and Organic farming and want to eat the best for my own health. Today, my Dad sent me this article and I would love your take. Thank you so much.

The author of the article is either dishonest or misinformed, I think.

Consider the crux of his argument: that organic produce often contains banned conventional pesticides, so much that “43 percent of the 571 samples of ‘organic’ produce tested violated the government’s organic regulations”. They’re just as bad, right? Except the article he references to support that claim says something different. The link is down now, but before it went dead it had this to say:

Of these 571 samples, 96 percent were compliant with USDA organic regulations. This means that the produce either had no detected residues (57 percent) or had residues less than 5 percent of the EPA tolerance (39 percent). Four percent of the tested samples contained residues above 5 percent of the EPA tolerance and were in violation of the USDA organic regulations. The findings suggest that some of the samples in violation were mislabeled conventional products, while others were organic products that hadn’t been adequately protected from prohibited pesticides.

The organic regulations allow for trace amounts (under 5% of EPA limits) of conventional pesticide on organic produce due to inadvertent contamination. Whether it’s environmental drift from nearby conventional crops or exposure from shipping and handling, it’s completely normal, acceptable, and unavoidable for organic produce to have a tiny amount of conventional pesticides. But Miller doesn’t make that clear. It’s only when he’s called out in the comment section that he amends his statement to say “43% of tested samples contained prohibited pesticides.”

If there’s anything, it’s that the organic label isn’t always a good barometer of the healthfulness of the food, nor is it always accurate. But organic agriculture? Composting? Topsoil preservation and expansion? Using non-chemical means of pest control? Maximizing soil health and nutrition? These are good things. The dirt-flecked carrot plucked from the ground yesterday really does taste better than the ones you get at the supermarket.

I’ve covered the nutrient differences in previous posts. Vitamin and mineral content aren’t markedly different (although it depends on the plant), but phytonutrient content — the unique plant compounds that improve resistance to oxidative stress and elicit a host of beneficial effects — tends to be much higher in organic produce.

There are other differences as well. Organic beets, for example, have more anti-cancer activity than conventional beets. And organic produce has lower cadmium levels (an undesirable heavy metal) and higher antioxidant compounds than conventional produce.

Overall, I’m not an organics stickler. The important thing is to just eat plants. If you can eat locally-grown ones grown using organic methods, that’s ideal. There’s nothing more American than handing money direct to the farmer for produce he or she grew. But organic agriculture is decidedly not a scam.

As for GMO, more on that Wednesday.

I have been following the basic principles of the Primal Blueprint about 90% of the time for the past 2 years. For the most part, I feel great. When I do eat grains or added sugar or dairy, I can feel the difference.

One concern I have is that I might be getting too little sodium. I never thought that I would say that. But…. since I almost never eat processed food and my meals are very simple (grilled protein and steamed vegetables, fresh fruit, eggs, baked potato with butter), I realized that I am getting very very little sodium.

I have low blood pressure – otherwise, I am a very healthy and active 70-year-old. I take no medicines of any kind – just a multi-vitamin, Vit C and K and K and Magnesium. But I often get quite tired after I eat and often think a nap mid-afternoon would be nice. I had thought that it might be my age catching up with me.

But… I am now thinking that it might be too little sodium in my diet….

Is there a risk in the Primal/Paleo world of getting too little sodium?

First up, sometimes a nap is just a nap. And a nap can be awfully nice to take in the middle of the day. Whenever I have the opportunity to do so, I take it.

As for the salt? Maybe. Hyponatremia, or low blood sodium, is more common in older adults than younger adults. That’s usually because older adults are more likely to be taking medications that cause salt loss or cause excessive urination (which causes salt loss). Since you mentioned being healthy and active, I doubt that’s the case, but, hey, symptoms are symptoms and it does sound from your description that your salt intake is on the low side. Eliminating processed (pre-salted) junk food and bad restaurant food eliminates the densest sources of salt in modern diets.

Eat salt to taste. Start adding a little more. There’s a common misconception about salt: that it just makes food salty. Actually, salt enhances existing flavors. If you’ve ever added what looked like a lot of spices while cooking but ended up with a bland meal, try adding a bit more salt. Often, it’s just what a dish needs to really pop. And a good steak needs a solid layer of salt to truly realize its potential. Since you’ve got low blood pressure, no one could object to you eating some more salt. Or could they?

In my experience, it’s the 70 and over age group that’s really fallen for the “low salt is healthy” nonsense. And they’re the ones who, arguably, need it the most.

A number of recent studies have found that among older adults, moderate to higher (at least higher than what most people deem acceptable) salt intakes correlate to better health.

In 2011, one study showed that a low salt diet increased insulin resistance in healthy men and women when compared to a higher-salt diet. Insulin resistance can lead to sugar crashes and sleepiness.

Another study showed that while reducing salt moderately improved the blood pressure of hypertensive patients by a mere 4.18 and 1.98 points for systolic and diastolic, respectively (but not of people with normal blood pressure), it increased triglycerides and LDL and elevated stress hormones.

Arguably my favorite health marker of all – being alive – also has an interesting association with salt intake. It seems that folks with a “medium” salt intake live longer than people who eat too little salt or too much salt. That amounts to roughly 4000 mg of sodium, or close to two teaspoons of regular salt. In another, calculated intakes of between 3 and 6 grams of sodium (about 2.5 teaspoons of salt) were linked to the lowest rates of death and heart attacks than either lower or higher salt intakes.

So low salt is not always better, and in the case of hypotension and random bouts of sleepiness, it might be actively harmful. Eat more salt, as much as tastes good to you, and see how you feel.

But naps couldn’t hurt, either. Take ’em if you need ’em.

When I started to care about what I eat, I first discovered doc Weston A. Price. His book Nourishing Tradition seems to me like a good way of eating and lifestyle. Then I discovered your Primal Blueprint with many similar features. So my questions are whether it’s possible to combine these two styles of eating, and what’s your opinion on Weston?

Weston Price’s fundamentals are sound. Or rather, were sound (he’s not around anymore). Weston Price the man — the dentist who traveled the world observing both the stellar health of traditional cultures and their diets and the health degeneration that occurred when those cultures lost their traditions and began eating industrial foods — made enormous contributions to nutritional science. He discovered the importance of vitamins A and D in the maintenance of oral (and ultimately overall) health. He noted the destructive effects of switching from wholesome diets of fresh, nutrient-dense food to diets of refined, industrial foods like white flour, white sugar, and vegetable oil. If you want to read about it straight from the source, check out Nutrition and Physical Degeneration, the book Price himself wrote after his travels. Nourishing Traditions is based on his work.

The Weston A. Price Foundation? I like their stance on diet, most of which is right in line with the Primal Blueprint. Full-fat meat and pastured dairy, lactofermented vegetables. An aversion to industrial seed oils, refined grains, and refined sugar. Traditionally-prepared grains and legumes (soaking, sprouting, fermentation) may not be Primal, but they’re certainly a healthier way to eat them. They’ve got some great minds there, like Chris Masterjohn, whose work into how the specific interactions between fat soluble vitamins A, D, and K play a huge role in human health and the importance of eating the whole animal (offal, skin, bones, connective tissue) and not just the muscle meat have had massive impacts on my thinking (and eating).

I’m not down with their support of homeopathy, and I don’t really pay attention to their other non-diet stuff so I don’t know how valid any of it is, but they’re quite solid when it comes to nutrition.

Thanks for your questions, everyone. And thanks for reading. Be sure to help out with any additional input you might have down below.