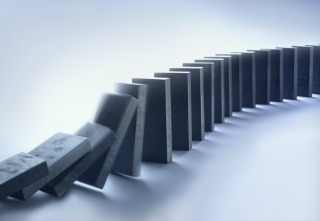 Most discussion of chronically-elevated insulin levels (hyperinsulinemia) and insulin resistance revolves around their relationship to bodyweight. This is unsurprising. Bodyweight’s what “sells tickets.” It’s why most people get interested in diet, health, fitness, and nutrition—to lose weight or avoid gaining it.

But improving insulin sensitivity and reducing fasting insulin levels have major ramifications for your health, longevity, and resistance to disease. And it’s not just because “weight gain is unhealthy.” Insulin itself, in excess, exerts seriously damaging effects. Today, I want to impress upon you the importance of controlling your insulin response by laying out some of the health problems that stem from not controlling it.

If you’re insulin resistant, insulin doesn’t work very well. You need more of it to get the same effect an insulin sensitive person would get. When insulin doesn’t work, its ability to shuttle glucose out of the blood suffers, and blood glucose goes up and stays up. That’s hyperglycemia. Everyone “knows” that high blood sugar is bad, but why? What exactly goes wrong?

Some cells are passive recipients of blood sugar, while others have mechanisms that prevent excess blood sugar from entering their membranes. In the presence of high blood sugar, the passive recipients begin producing excessive amounts of reactive oxygen species (ROS). ROS aren’t pathological in and of themselves. They’re signaling molecules that our bodies need for healthy cellular function. But unchecked ROS generation induced by hyperglycemia causes a lot of problems.

In endothelial cells, hyperglycemia inhibits the production of nitric oxide. Nitric oxide is a vasodilator—it helps our blood vessels widen to accommodate increased blood flow and reduce shear stress. Without sufficient nitric oxide, our blood vessels are more susceptible to high blood pressure and our risk for heart disease and atherosclerosis goes up.

In neurons, hyperglycemia causes shrinkage. No one likes shrinkage, especially not in the brain cells where thinking occurs.

Insulin is a growth promoting agent, and cancer is a disease of unchecked cellular growth. There are nuances to this of course. But by and large, those are true statements. It’s no surprise that hyperinsulinemia is a risk factor for most, if not all cancers.

While insulin isn’t everything when it comes to cancer, the links are undeniable and myriad—and worrying.

People with a genetic predisposition toward hyperinsulinemia have a higher chance of developing pancreatic cancer.

Across the board, in both obese and people of normal bodyweight, hyperinsulinemia, whether it’s genetic, simulated, or diet-driven, increases cancer incidence and mortality.

Okay, okay. That’s all rather convincing, but there’s a chance that these are merely associations and some common factor is causing both the hyperinsulinemia/insulin resistance and the cancer. Right?

What seems to counter that hypothesis is the effect of metformin, an anti-diabetic drug, on cancer. Compared to other diabetic drugs, metformin reduces the risk of cancer in type 2 diabetics. Metformin’s mechanism of action? A reduction in insulin levels and improvement of insulin resistance.

Alzheimer’s hits families like a freight train, but if you know what to look for you can see it coming.

Alzheimer’s patients have high blood sugar, but their neurons are so resistant to the effects of insulin that they’re unable to utilize the available glucose for energy. That’s why ketogenic diets and ketones in particular are so helpful for Alzheimer’s; they offer an alternative fuel source that even the insulin resistant brain can utilize.

The two go hand in hand, and it’s not just a coincidence.

As you saw in the hyperglycemia section, insulin resistance can increase the risk of heart disease by increasing hyperglycemia and reducing endothelial function. This impairs the blood vessels’ ability to react to stressors and makes them more vulnerable to atherosclerosis.

What You Can Do

A big step, maybe the first step when you’re insulin resistant with hyperinsulinemia, or even just suspect you are, is to reduce your intake of the most insulinogenic macronutrient around: carbs. This stems the tide and stops feeding the fire until you can figure out and resolve the root cause of your dysfunction.

That next part is harder. Some of it is genetic; there will be people who simply make more insulin than others, or who are more insulin resistant as a baseline. Oftentimes the dysfunction is multifactorial, stemming from a dozen different causes, all of which require your attention. In past posts, I’ve explained strategies for combating insulin resistance and reducing hyperinsulinemia. If you haven’t read those yet, do so.

Take the issue seriously, whatever you do. An expanding waistline might be unsightly and undesirable, but it usually doesn’t strike fear into hearts and minds. You know what does, and what should?

Thanks for reading, everyone. Take care, be well, and let me know what you think about all this down below!