The Health Toll of Financial Stress 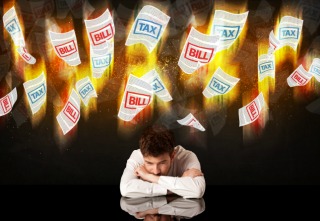 Sure, this post comes right on the heels of Cyber Monday…but is there ever a perfect time for a message like this? Yes, I run a business, but I still don’t mind kicking the cultural hornet’s nest. Some things don’t change.

But that doesn’t mean there isn’t contradiction. Here I am doing my own holiday shopping today (don’t tell Carrie)—and offering my own deals to those who are interested. The holidays—with all the shopping and parties and prep—are fun. No doubt. Simultaneously, I know financial stress takes a major toll this time of year, and it doesn’t have to be that way.

Estimates for last year’s Christmas gift spending placed the average American in the vicinity of $936—with the average parent spending an additional $422 per child on top of that already princely sum. (Whether that figure still holds true in a family of four or five is debatable.)

And that may not even be the half of it. Holiday dinners, events, decorations, clothing, and trips add to the price tag. The result? More than half of us rack up debt for holiday expenditures, a sizable portion of which will take more than half a year to pay off.

Financial stress carries over past the festivities of the season, and its costs can be much higher than a credit card total.

Financial Stress at The Holidays

Let’s talk numbers. According to the National Retail Federation, U.S. retail sales during the 2015 holiday season surpassed the GDP of 181 other countries. That’s more spending on presents, food and holiday sundries than the combined GDP of countries like South Africa, Sweden and Norway…amounting to a whopping $630+ billion.

Perceived social expectations set the stage. A few years back, a survey of 1000 Americans across all income brackets found that 45% of those polled were under so much financial pressure that they’d prefer to skip the holiday scrabble altogether. Another 45% said they didn’t have enough money set aside to cover holiday expenses.

It gets worse. While 41% of people are unable to survive more than two weeks without a paycheck, 59% of people are carrying debt into the new year. Not surprisingly, a 2015 Healthline survey showed that over 60% of people get stressed out just thinking about the holiday season, with finances being the biggest cause of that stress.

Even within the Primal community, there’s a tendency to focus on tangible sources of stress—inflammatory foods, toxic compounds in our living environment, etc. Yet, financial woes crop up again and again as one of the most pervasive forms of stress.

A 2008 study found that college students with a debt of $1000 or more were at significantly higher risk of obesity, excess TV viewing, infrequent breakfast consumption, fast food consumption, binge drinking, substance abuse, and lack of exercise.

In another study, financial strain held a particularly strong association with heavy drinking and smoking among elderly men. Further research indicates that smokers with financial stress are less likely to try to quit, less likely to succeed if they do try, and more likely to relapse. Presumably, it’s something of a vicious cycle, with smoking leading to financial strain, which in turn promotes more smoking. Stress can send us into a cul-de-sac of bad habits.

Over time, these stress-justified bad habits are likely to create their own slew of health problems, the most common of which is weight gain. In a study involving 1,355 U.S. men and women, increasing levels of psychosocial stress in the form of “difficulty paying bills” was associated with a higher propensity for weight gain. The mechanisms behind this are well understood, with higher levels of stress leading to the development of “palatable food” (aka junk food) motivation and engagement in overeating to offset the negative emotional effects of stress. This higher energy intake, coupled with a reduction in physical activity, stimulates visceral fat accumulation. The rest is history.

Perhaps most famously, higher levels of stress, both acute and chronic, have been associated with impaired cardiovascular health and life-threatening complications. Research shows that work-related stress, which often goes hand in hand with financial stress, can increase a person’s risk of a first coronary heart disease (CHD) event. Among existing CHD patients, long-term stress can increase the risk of repeat CHD events and mortality. Other studies indicate that psychological stressors can lead to sudden death, myocardial infarction, myocardial ischemia, and wall motion abnormalities.

But that’s just the tip of the iceberg. In the brain, stress undermines well-being by releasing corticosteroid hormones that control neuronal and network responses tied to behavioral adaptation. In acutely stressful scenarios, this process is beneficial to our survival, heightening awareness and honing reflexes. But over the long term, such as is the case in chronic financial strain, these corticosteroid binary control mechanisms can erode mental health and promote brain disease.

In the early days, this detrimental effect of stress on the brain can manifest in impaired cognitive function. For example, male rats exposed to 21 days of restraint stress exhibited both reduced visual and spatial memory, while chronic unpredictable stress can drastically alter the behavior of rats and promote a rapid shift towards habitual tendencies. The mechanisms by which humans respond to stress aren’t all that different.

And if you’re not sleeping well, you’re probably not aging well. Researchers postulate that chronic psychological stress “is significantly associated with higher oxidative stress, lower telomerase activity, and shorter telomere length, which are known determinants of cell senescence and longevity.” In other words, financial stress leads to oxidative stress, which undermines the health and longevity of your cells—making you age faster.

Then there’s all the digestive issues that come with chronic stress. In animal models, stress has been shown to promote the “development of gastric ulcers, altered gastrointestinal motility and ion secretion, and increased intestinal permeability.” Stress also teams up with other pathogenic factors in the GI tract, including H. pylori and NSAIDs, to encourage gastrointestinal disease.

Indeed, the type of stress induced by financial strain has been associated with almost all of the most common chronic digestive diseases, including functional gastrointestinal disorders, inflammatory bowel disease, and gastro-oesophageal reflux disease. So many of us have been there at some point….

Short of packing the car and whisking the kids away from all civilization, there are plenty of steps we can take to keep budgetary sanity. I’ll share a couple thoughts, and I invite you to offer your own strategies for keeping a handle on the finances as you enjoy the best of the season.

With the deceptive ease of credit cards, it’s all too easy to blindly spend and worry about the consequences later. No rocket science here of course, but we can all benefit from figuring what we can afford to buy without borrowing this month, and to stick to that amount. Clarity around financial matters isn’t a killjoy. It just offers the objective facts we have to work with.

Smart shopping, deep discount or consignment bargains, secret Santa exchange, or a one-gift-per-family-member policy can ensure present spending doesn’t break the bank. For the holiday meal, consider taking a drive to the farmgate to purchase your turkey and ham and save a considerable sum.

More importantly, make a point of not using your credit card for your holiday spending— meaning when the cash runs out, the buying stops and there’s no debt accruing. (Anybody still use the old envelope system? Some things shouldn’t ever go out of style.)

If need be—and there’s nothing wrong with hardcore accountability, give your credit cards to a (trusted) friend and tell them not to give it back until after the festivities are truly done and over.

We’ve all been there: a shopping mall packed to the rafters in the weeks leading up to the holidays, filled with people like you desperate to get their last minute gift buying and food acquiring out of the way. It’s not an enjoyable time in anyone’s life, even if there are no budgetary constraints. I know I personally don’t make good decisions in that environment.

My solution is to ditch the crowds altogether and do most of my holiday buying online. It means something to shop from the sanity of your own home and walk away from the computer when you’ve had enough—financially or otherwise. It’s open anytime, so I can research, mull, and make decisions when I’m ready to make them. And let’s be honest…the experience is more pleasant with a glass of wine anyway.

Thanks for reading folks. What’s your strategy for staving off financial stress over the holiday season? Take care.