The Greatest Piece of Exercise Equipment Ever Invented 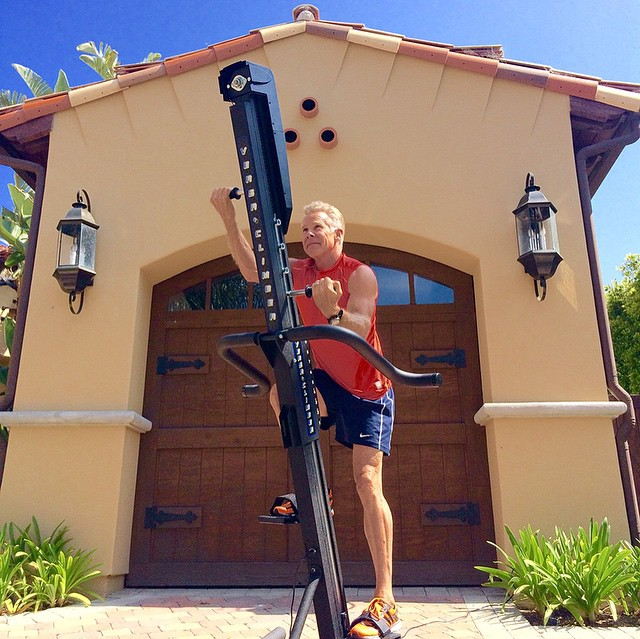 Not the barbell. Not the bicycle. Not the rower, the Airdyne, not the pullup bar. I’m talking about the Smith Machine, of course, specifically the squats and curls you can do within its elite confines.

Just kidding. It’s the Versaclimber, folks: the most brutally effective piece of fitness equipment you’ll ever use (but probably haven’t).

Most people don’t know about it because no one talks about it, few use it, and gyms don’t stock more than one if you’re lucky. Is this because it’s a useless piece of machinery? No. The Versaclimber is almost too good, too effective, too intense an experience for most people. The few that have used it almost invariably quit because it’s so hard. And gyms don’t have many because they can’t convince people to use it, to actually go all out like they’ve never gone all out before.

The Versaclimber and I go way back. Back in 1992, I actually set the (unofficial) world record for the mile climb on one, doing 5,280 feet in 22:40, a 232 feet per minute average. The craziest thing about that mile was that I wore a heart rate monitor and held 186 beats per minute for the entire ride. To put that into perspective, by then I was in my late thirties and had already had a full career as an elite endurance athlete (both marathons and triathlons), yet I’d never held my heart rate that high for that long. Nor since.

And in the last year, I’ve rediscovered it after a (too) long absence. Man, have I been missing out.

I’ve always said it’s the greatest piece of cardio equipment ever devised. I can think of nothing that gets your heart rate higher quicker. And it does so with very little unneeded stress or pounding on the joints. You are using both lower and upper body and since you’re upright, the heart is having to pump a bit more uphill to feed the arms. It’s a true total body workout — arms, trunk muscles, legs, glutes, and cardiovascular system are all called upon. Best of all, the work is spread out over the body, so you’re able to tax your entire system to a greater extent than if you were generating all the power with, say, just the legs (on a bike or treadmill).

You can adjust the stride length to make it so that you torch your glutes or, if you prefer, focus on the quads and calves. You can focus on the upper body, really stretching it out so every stride is like a single-armed supported pullup. In my opinion, that makes this the premium full-body glycogen depletion tool. Anyone interested in really emptying their reserves (say, a cyclic ketogenic dieter preparing for a refeed) should hop on the Versaclimber for a depletion workout; no muscle group gets passed over on these things.

How do you use a Versaclimber?

It’s one of the more intuitive cardio machines. Step with the left leg as you pull with the left arm, then switch. (Or do “cross crawl” climbing pattern depending on which model you have access to and which pattern you prefer.) Like the stationary bike, it’s hard to mess up on the Versaclimber.

Today I primarily use it for intense intervals, doing a minute hard with a two minute rest for six rounds – or doing 1,000 feet hard with a four minute rest for three or four rounds. On the tougher ones, I’m getting my heart rate up to 170 and holding it there, well beyond my 61 year old theoretical max of 159. Occasionally, I will just get on and hold a steady pace for 3-4,000 feet as a time-trial or “tempo” workout.

There are some other options, too:

Is it just a Stairmaster?

No, emphatically. Stairmasters are cool, but the steps move on their own and you have to keep up. With the Versaclimber, you move the steps; they wait for you to initiate the movement. You have to be motivated, then, to train on this machine. You can’t just go through the motions because you are creating the motion.

My Versaclimber is fixed resistance, but models with adjustable resistance exist. I find the fixed resistance to be plenty hard, and I’m using it mostly for the cardiovascular benefits/sprinting, so I’m not looking for a strength session. Your mileage may vary. You could always wear a weight vest, I suppose.

This is such a ball-buster that I don’t do it more than once a week, sometimes once every two weeks. I still sprint, but the Versaclimber has replaced some of them. It’s just too “gentle” on the joints while being absolute hell on the muscles (all of them) and cardiovascular system to ignore. If you’re at all leery about running all-out sprints, or you have confirmed injuries that sprinting exacerbates, this might be the thing for you. Like any piece of cardio equipment, it’s a tool in your arsenal that can be used to increase fitness when deployed appropriately — but can also be abused in a chronic cardio sort of way, which I have seen happen. I still wear a heart monitor when I use a Versaclimber and can sometimes scare myself at how hard I can work when I choose to. I think that’s a good thing, provided I am attuned to my level of fitness and recovery. I’d recommend that anyone who pushes the limit on the Versaclimber also wear a heart rate monitor if they aren’t completely in tune with their body’s limits and recovery needs, just to be safe.

I so believe in the efficiency and effectiveness of the Versaclimber — when used appropriately, not to excess — that I invested in a gym in L.A. called Sirens and Titans that offers group workouts using the Versaclimber that put other group cardio classes to shame. I’ve gone through a couple of them and, well, I try to find excuses not to go back.

If you can find a Versaclimber at your gym, give it a go. If you find one cheap on Craigslist, or you have the money to spend on a brand new one, pick one up. I have one in my home, which the good folks at Heart Rate Inc who make the machines were kind enough to give me. Since it’s vertical, it actually doesn’t take up much space — about four feet by four feet. You can easily stick one in a corner without it sticking out too badly. Just make sure you use it to train, not hang clothes!

So let’s hear from all of you. Anyone used a Versaclimber? If you haven’t you really should. I’d love to hear all about your experiences with the machine.