The Fat Burning Brain: What Are the Cognitive Effects of Ketosis? 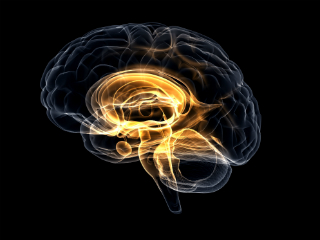 Although mainstream sources still mistake “the brain needs glucose” for “the brain can only run on glucose,” regular MDA readers know the truth: given sufficient adaptation, the brain can derive up to 75% of its fuel from ketone bodies, which the liver constructs using fatty acids. If we could only use glucose, we wouldn’t make it longer than a few days without food. If our brains couldn’t utilize fat-derived ketones, we’d drop dead as soon as our liver had exhausted its capacity to churn out glucose. We’d waste away, our lean tissue dissolving into amino acids for hepatic conversion into glucose to feed our rapacious brains. You’d end up a skeletal wraith with little else but your brain and a hypertrophied liver remaining until, eventually, the latter cannibalized itself in a last ditch search for glucose precursors for the tyrant upstairs. It would get ugly.

That’s adaptation. But is there an actual cognitive advantage to running on ketones?

Maybe. It depends. It certainly helps people with neurodegeneration.

People whose brains suffer from impaired glucose utilization see cognitive benefits from ketones. In Alzheimer’s disease, aging-related cognitive decline, epilepsy, and Parkinson’s disease, brain glucose uptake is depressed—even before any actual cognitive decline appears. Despite high glucose availability, the aging, epileptic, Alzheimer’s, or Parkinson’s brain can’t utilize enough of it to handle cognition. Enter ketones. Ketones act as an alternative energy source for the glucose-starved brains. It’s no coincidence that ketogenic diets can improve symptoms (and in some cases abolish them) and cognitive function in all four conditions.

Anecdotes certainly suggest that otherwise healthy people can experience cognitive benefits from brain utilization of ketones. The entire butter/coconut oil coffee movement is predicated on ketone production—from morning fat bombs (especially medium chain triglycerides in coconut oil, which convert directly into ketones regardless of carb intake) and very low carb intakes—improving mental clarity, focus, and performance.  In people with “mild cognitive decline” rather than full-blown Alzheimer’s, a ketogenic diet improves memory. It hasn’t been validated in controlled trials of healthy subjects, but the fact that it’s a “movement” and shows efficacy in “unhealthy” brains suggests it’s worth exploring.

There are some interesting studies, to be sure, albeit not in totally healthy people. Such is the way of medical research.

If there are benefits, what’s going on?

Ketosis upregulates mitochondrial biogenesis in the brain. It literally creates new power plants in the brain that are good at burning fat-derived fuel. This upregulation is actually responsible for the anticonvulsant benefits in patients with epilepsy, and, likely, the benefits seen in other brain disorders with glucose uptake problems. By providing an alternate source of brain power, brains that don’t run so well on glucose can begin burning fat. There’s no indication that ketosis only induces mitochondrial biogenesis in “unhealthy” brains. It simply hasn’t been studied yet, but I don’t see why it wouldn’t also build mitochondria in healthy brains.

There’s reason to believe ketone-induced mitochondrial biogenesis in the brain will improve its function.

For one, extra energy sources are always nice to have. That they might improve the way your brain works makes intuitive sense.

Two, exercise, perhaps our most reliable and potent booster of mitochondrial biogenesis in the brain, is downright nootropic. Exercise increases blood flow to the brain, which provides more oxygen and energy but also reduces free radical damage and enhances memory. It stimulates the creation of new neurons and the production of brain-derived neurotrophic factor (BDNF), a chemical that is instrumental in neuron preservation and formation. Exercise also promotes gene expression that supports plasticity, the brain’s crucial power to alter neural pathways.

If exercise promotes mitochondrial biogenesis and better functioning in the brain, perhaps ketosis does, too.

Elevated ammonia levels and depressed GABA levels contribute to a condition called “brain fog.” We’ve all had it. Everything is muffled. Your synapses fire blanks, your neuronal communication medium is cold molasses. Works suffers, nothing gets done.

According to a very interesting post from Dr. Bill Lagakos of the always interesting Calories Proper blog, ketosis has the potential to alleviate brain fog. There’s a lot of biochemistry thrown around, so geeks are advised to read the post in full, but two big, relevant takeaways are these:

Ketone bodies are known to increase feelings of euphoria in some people.

I know that the first cup of coffee after a great night’s sleep foments a heady dose of optimism tinged with focus that always leads to a productive morning. Maybe being a fat-burning beast in mild ketosis from the overnight fast is an additive.

I’m not surprised by any of this. For most of human history, a regular person would be regularly exposed to ketosis. Mostly light and transient, sometimes more protracted. But they were never far from a mildly ketogenic state for many reasons.

Long breastfeeding: Breastfed infants are in a mild state of ketosis (this is different from being on a very low carb diet, which babies are not!).

Occasional fasting (the tribe going hungry, the hunter coming up short, the free range pre-1990s child being out all day and forgetting to eat): Full-blown ketosis.

This was “enough” to keep things in check and, likely, hold off neurodegeneration. Most of us are only learning about ketosis after a half or quarter lifetime of standard Western eating patterns. We’ve been snacking, overweight, unable-to-skip-a-meal sugar-burners, and we probably need a stronger intervention. That’s where ketones, ketogenic diets, and fasting come in.

You don’t even have to start counting the carbs in your leafy greens. There are ways to cycle between ketosis and higher-carb days, outlined in this post. There are also other ways to set up a meeting between ketones and your brain without changing your overall diet.

Here are a few.

Fasting: A fast quickly induces ketosis. You’re not eating anything, so your only option is to consume your own body fat. And to offset the lack of incoming glucose, your brain will run partially on ketones. It helps to be a strong fat-burner already, as you’ll start dipping into your body fat stores right away and everything will go more smoothly. Anyone who’s fasted without being fat-adapted can attest—it’s not easy.

Don’t eat too late: Even just a “fast” from dinner to breakfast is enough time to induce a little ketogenesis. Ketosis is a spectrum, not a binary. By eating earlier and avoiding midnight snacks, you allow your body to start burning fat and converting it into ketones. You’ll know it when you have funky ketone breath in the morning; it’s a sign of a good metabolism (PDF).

Eat medium chain triglycerides: Adding MCTs, found in coconut oil or isolated MCT oils, to a regular diet spurs the creation of ketones. You don’t even have to reduce carbs, although I probably wouldn’t recommend trying a high-carb, high-MCT oil diet. Might get weird (see the next section).

Eat ketone esters: “Eat” may be optimistic. “Do everything in your power to mask the flavor” is more accurate. These things are foul. But man do they quickly induce ketosis. I’ve taken them to experiment. Pretty hard on the digestive tract. They require a ton of taste alteration to get past the nastiness. I swear I get some funky stomach effects from some of them almost instantly, but I do notice I can play two hours of hard Ultimate with no other fuel.

I think they are awesome for a fat-adapted athlete. I doubt their efficiency and wonder about their safety in a sugar burner. In nutritional ketosis, or during fasting, both free fatty acids and ketones are elevated. This is normal. It’s physiological. When you add ketone esters to a regular diet, free fatty acids are low. This is unprecedented. Peter over at Hyperlipid is suspicious. He doesn’t like “faking ketogenic diets.” Tread lightly.

Primal Endurance training: Low-level aerobic activity is awesome for starting ketosis. 180 minus your age = the heart rate you need to stay at or under to maximize fat burning efficiency, lay your aerobic base, and upregulate mitochondrial biogenesis. Do this on an empty stomach and you’ll kickstart ketosis.

I don’t think we all need to be on a ketogenic diet, nor do we need to remain in ketosis for long periods of time. I do think we need to slip into ketosis every once in awhile, because we seem to be built for doing it and derive benefits from it. We know in the short term (and probably longer term) it’s safe. We know it seems to stave off neurodegeneration, as well as improve the brains of people already suffering from it. What we don’t know is if it will provide nootropic benefits to healthy individuals.

I suspect the occasional foray into ketosis will help you think, perform, and produce. I’ve felt it myself.

How about you? Has the fat-burning brain been a boon to your business?

Thanks for reading, all. Take care.