The Definitive Guide to Seeds 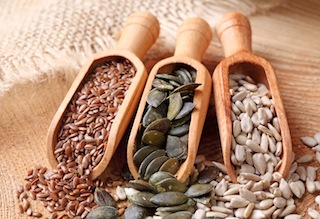 Last week, I gave you the definitive guide to nuts, focusing on the ten most widely available types. Today I give the same treatment to edible seeds. If you’ve ever wondered whether chia seeds are good to eat, or sesame seeds can be legitimate snacks, or flaxseed actually isn’t as good (or bad) as you may have thought, this is the post for you. If you need to choose sides in a long-standing and bitter blood feud pitting the sunflower seed farmers on your mother’s side of the family against the pepita producers on your father’s, this post will help you decide. If your trustafarian friend’s obsession with the industrial applications of hemp is getting on your nerves, this post will give you the tools to analyze his arguments.

As you’ll see below, seeds are nutrient-dense little guys that can really pack in the minerals. Let’s get to it:

Multi-level marketers hawk it. Food manufacturers add a teaspoon of it to juice drinks and double the price. Bulk bins in health food stores across the world stock it. The prominence of the chia seed as a dietary supplement has supplanted its prominence in the “As Seen on TV” market. Should you be eating it?

Flaxseed gets a bad rap in the ancestral health community. Sure, when it goes bad it smells like paint thinner. Sure, flaxseed oil is actually used as paint thinner. It doesn’t taste particularly good, and the seeds get stuck in your teeth if you’re not careful about thoroughly milling them. The accolades it receives in both conventional and alternative health circles can be cloying, I know. And yeah, the omega-3s aren’t a good replacement for fish fats. But don’t count flaxseed out just yet. As you’ll see, it has some interesting components that may offer unique health benefits — even if you eat plenty of wild salmon.

If you’ve spent any time in hazy college dorm rooms with towels blocking the space under the door and “Buffalo Soldier” playing on repeat, you’ll have heard about the universal utility of hemp. It makes better, stronger, and more breathable clothing than cotton. It can replace synthetic building materials. It doesn’t use many pesticides. It’ll save the world, man. And, they say, it can even feed it. Yeah? Well, I wouldn’t go quite that far, but hemp seed is a viable food source, certainly edible and pleasantly nutty. How does it stack up nutritionally?

Pumpkin seeds, or pepitas, are my favorite. Roasted with a light dusting of sea salt and eaten as snacks, scattered across a salad for texture and crunch, lightly toasted and ground up to make a green mole sauce? It’s a versatile little seed. I have fond childhood memories of scooping out the innards of Halloween jack-o-lanterns, separating the seeds, and roasting them in the oven. That pumpkin and squash seeds get lumped into the same category whichever online nutritional database you use, though, has always irked me. But that’s what I have to go on. Don’t blame me if you rely exclusively on delicata squash seeds for your magnesium and they end up having very little.

Most research has looked at the health effects of pumpkin seed oil rather than the pumpkin seeds themselves. Still, since the seeds contain the oil, any benefits the oil confers should also apply to seed eaters.

Pumpkin seed oil has been shown to:

As for the seeds?

We don’t normally think of sesame seeds as a snack item because trying to snack on a baggie of sesame seeds doesn’t really work. They’re too small to chew and they don’t handle like larger seeds. Instead, sesame seeds are garnishes. They’re sprinkled over dishes as finishers and flavorers. If you want to use larger amounts of sesame, you grind it up into tahini paste, like in hummus, or mix the whole seeds with molten sugar to form clusters or brittle. As a result, sesame seeds rarely contribute much caloric bulk to a person’s diet. Is that a mistake?

Growing up a young lad in Maine, my summertime roaming radius was a dozen miles across. And if you wanted to find me, you followed the sunflower seed hulls I spat out at a steady clip all day long. Eating sunflower seeds and spitting out the hulls is about as American as apple pie. Actually, seeing as many Native American tribes grew and harvested sunflowers right along with their squash, corn, and beans, sunflower seeds are way more American than apple pie. And even though they exist, let’s ignore those deviant monsters who eat the entire shell along with the seed inside.

Seeds are potent, made all the more so by the diminutiveness that masks them. It’s easy to absentmindedly snack all day long and end up eating an entire cup of pumpkin or sunflower seeds. They’re almost uniformly high in phytic acid, which may have its good side but definitely can impair mineral absorption at high levels. Many are high in omega-6 fats, which aren’t really a problem in the context of whole foods but may be if those foods are eaten to excess. And the rich body of evidence supporting regular nut consumption just isn’t there for seeds. I suspect seeds are quite beneficial in the right amounts given their nutrient levels and the limited research that does exist in their favor, particularly if you soak and perhaps even sprout them, but exercise caution just the same. We are neither birds nor rodents, and a seed-based diet probably doesn’t suit us.

That’s it for today, folks. How’s your relationship to edible seeds? Do they agree with you? What are your favorites?