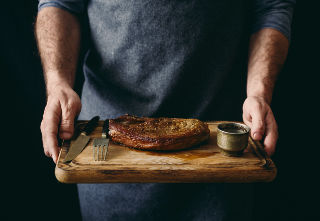 All-meat diets are growing in popularity. There are the cryptocurrency carnivores. There’s the daughter of the ascendant Jordan B. Peterson, Mikhaila Peterson, who’s using a carnivorous diet to stave off a severe autoimmune disease that almost killed her as a child. The most prominent carnivore these days, Dr. Shawn Baker (who appears to eat only grilled ribeyes (at home) and burger patties (on the go), recently appeared on the Joe Rogan Experience and Robb Wolf’s podcast, and is always breaking world records on the rower. Tons of other folks are eating steak and little else—and loving it. There are Facebook groups and subreddits and Twitter subcultures devoted to carnivorous dieting.

What do I think?

I’m no carnivore. I love my Big Ass Salads, my avocados, my steamed broccoli dipped in butter. My blackberries, blueberries, raspberries, and strawberries. My spoonful of coconut butter.

Yet, I get the appeal.

We’ve been eating meat for three million years. Its caloric-and-nutrient density allowed us to dispense with the large guts needed to digest fibrous plant matter and build massive, energy-hogging brains. There isn’t a traditional culture on Earth that wholly abstains or abstained from animal products. Nearly every human being who ever lived ate meat whenever he or she could get it.

Thus, meat appears to be the “baseline food” for humans. If you look past the cultural conditioning that tries to convince us that meat will give us heart disease, cancer, and diabetes, meat looks pretty damn good as a place to start.

The question is if it’s where we should stay exclusively….

All this said, I’m skeptical about the “steak and water” or “ground beef and water” styles of the carnivore diet. Let me explain….

A Few Key Arguments For It (and My Feedback)

“In its natural state, meat is relatively safe as far as toxins go.”

Animals can run and bite and claw and fly to get away from predators; most don’t need to employ any chemical warfare that causes problems when you eat the meat. Sure, allergies and intolerances can arise, like if you get bitten by the Lone Star tick and pick up a red meat allergy, but those are quite rare.

“Whereas plants’ phytonutrients are pesticides.”

This is technically true. They are toxins the plant produces to dissuade consumption by predators—toxins that the plants manufacture to maim, poison, kill, or even just make life uncomfortable for the animals who eat it.

But just as we can do with many other “harmful” inputs, we tend to treat plant phytonutrients as hormetic stressors that make us stronger, healthier, and more robust.

There’s an upper limit, of course. And many of the phytonutrients have been primarily applied either to populations eating normal omnivorous, often downright unhealthy diets or to unhealthy subjects trying to improve a disease marker. As I’ve said before, there aren’t any real studies in healthy human carnivores, so we don’t know one way or the other whether the promising results of the extant studies apply to people eating only animal products.

The protein has all the amino acids we need to live and thrive. We readily absorb and utilize the vitamins and minerals in meat; they already come in “animal form,” requiring little to no conversion before we can start incorporating them into our physiology. Plant nutrients usually undergo a conversion process before humans can utilize them, and not every human has the same conversion capacity.

Some of those essential and/or helpful nutrients only occur in meat, like creatine, carnosine, vitamin B12. There’s literally no realistic way to obtain them without relying on supplementation, which didn’t exist until the last hundred years.

I could see that. They haven’t tested the requirements for selenium, magnesium, and iodine on a zero-carb carnivorous diet. Do they go down? Can you therefore get by and thrive on lower intakes—the low levels found in muscle meat?

It hasn’t been empirically tested. That’s true. It largely hasn’t undergone a series of RCTs. You can’t pull up a Cochrane meta-analysis of carnivore studies. All we really have are anecdotes.

I’m not disregarding the power or relevance of anecdotes and testimonials. Those are real. They’re not all suffering from a mass delusion. They’re not all lying. Peer-reviewed? No. Admissible in a scientific paper? Not unless you call it a case study. When you’re there in the room with someone pouring their heart out because something you wrote helped them drop 50 pounds and reclaim their lives, you don’t go “Yeah, but where are the clinical trials?” At some point, the weight of anecdotes adds up to something substantial, something suggestive. And hey, if it’s working for you, there’s no arguing that.

But I can’t point to anything solid and totally objective in the research. Not yet anyway.

Still, any time you embark on a historically unprecedented way of eating, whether it’s pure muscle meat carnivore or vegan, you should be a little more careful about what you think you know.

What Do We Know About Carnivory in Human History?

We don’t know if there have been any purely carnivorous human cultures. We haven’t found any yet, and you can’t prove a negative, so I won’t say “there were none.”

In all the best candidates so far, though, plants sneak into the diets. The Inuit actually utilized a wide variety of plant foods including berries, sea vegetables, lichens, and rhizomes. They made tea from pine needles, which are high in vitamin C and polyphenols.  The Sami of Finland, who primarily live off a low-carb, high-fat diet of meat, fish, and reindeer milk (I have to imagine that’s coming to Whole Foods soon), also gather wild plant foods, particularly berries and mushrooms (Finland’s forests produce 500 million kg of berries and over 2 billion kg of mushrooms each year!), sometimes even feeding their reindeer hallucinogenic mushrooms to produce psychoactive urine. The Maasai are known for their meat, milk, and blood diets, but they often traded for plant foods like bananas, yams, and taro, too, and they cooked their meat with anti-parasitic spices, drank bitter (read: tannin- and polyphenol-rich) herb tea on a regular basis, and used dozens of plants as medicines (PDF). Even Neanderthals used plants as food and medicine, we’re learning.

Even if we discover evidence of carnivory in human prehistory or in some extant group, the emerging science of genetic ancestral differences suggests that the habitual diets of our recent ancestors shapes the optimal diet for us today. If your close ancestors weren’t carnivores, you might not have the adaptations necessary to thrive on an all-meat diet.

Still, what about Vilhjamjur Stefansson, an Arctic explorer who came away very impressed with the native Inuit diet and underwent a series of studies on the effect of an all-meat diet in man? He and a colleague did great for over a year eating only meat. But Stefansson wasn’t eating ground beef. In his own words, he ate “steaks, chops, brains fried in bacon fat, boiled short-ribs, chicken, fish, liver, and bacon.” Definitely carnivorous. Definitely not just steak or ground beef, as many modern carnivores seem to be eating. All those “weird” cuts gave him critical micronutrients otherwise difficult to get from just steak.

How To Best Optimize a Carnivore Diet

While you won’t find me switching to the carnivore side, if I were to do a carnivorous diet, here’s how I’d try to optimize it (and why).

They’re not quite animals, but they contain everything you need to build a bird from scratch. That’s cool·—bite-sized whole animal.

Liver is unabashedly animal flesh. It absolutely qualifies for a carnivorous diet. Loaded with choline, folate, vitamin A, copper, and iron, it’s nature’s most bioavailable multivitamin. There’s no reason not to include it. If you get your hands on some fish livers, you’ll get a ton of vitamin D along for the ride.

A few oysters, some mussels, a filet of wild sockeye salmon… You’ll get vitamin D, selenium, iodine, copper, iron, manganese, and long-chained omega-3s (which tend to be rare even in pastured ruminant flesh). A high quality fish oil can help with this, of course, but I’d still use the opportunity to diversify with seafood. Not every meal has to—or should—be a New York strip.

Calcium is really tough to get on a carnivorous diet, and calcium can be really helpful in balancing your phosphorus (from meat) intake. Enter dairy. Dairy is an animal food. It’s food in the purest sense—animals produce it for the express purpose of feeding other animals. In my estimation, it’s actually one of the most carnivorous foods around and most self-professed carnivores should be eating it. If you have trouble with lactose, eating hard cheeses, kefir, and yogurt is a great way to incorporate dairy and get all the calcium you need.

A constant influx of muscle meat will keep mTOR topped up. That’s great for muscle growth and general robustness. Just do something to stop the protein intake for a day or two, lest you start fueling unwanted growths.

All the nearly-carnivorous cultures we have good data on did similar things, using bitter herbs and barks and the like as supplements to their diets. You’re not getting calories from this stuff. You’re getting non-caloric compounds that provide health benefits.

Get the Best Quality Meat You Can Find and Afford

While I’m sure a diet of snare-caught hare, Alaskan elk, and choice sockeye salmon you wrest from the grasp of picky grizzlies poised over rivers preparing for a long winter would be ideal, it’s not necessary. Yes, grass-fed and -finished/pastured as well as organic are ideal, but do the best you can with what you have.

Use Bone Broth or Other Collagen Source

It’s a great way to get collagen and the glycine it contains to balance out all the methionine you’re eating, especially if you’re doing the muscle meat-only thing and avoiding most gelatinous cuts of meat. Make it yourself or buy. Collagen supplementation, of course, works here, too. (I happen to know a good one.)

Try Adding Back in Other Foods Eventually

Stuff like fruit (which wants to be eaten), honey (technically carnivore!), winter squashes, avocados, and even white rice are relatively low in plant toxins and worth trying to incorporate if you can handle them. Using carnivore as a healing protocol to prepare you for reintroduction of foods that used to bother you might just be the best possible way to “go carnivore.”

The carnivore diet isn’t for me. I like plants way too much. But I’m cautiously optimistic that it could work for more people than you’d expect, provided they heed as many of my suggestions as possible.

That’s it for me, folks. What about you? Have any experience eating a carnivorous diet? Interested in trying? Let me know what you know!