Sugar’s Day Is Done? A Review of Gary Taubes’ Latest Treatise, The Case Against Sugar 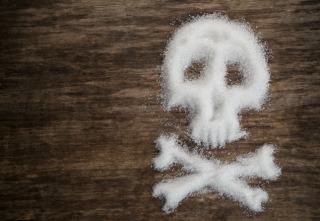 He expounded the arguments in the Times piece in his next two books, Good Calories, Bad Calories and Why We Get Fat. The first, which utterly demolished the conventional wisdom about saturated fat, was deeply influential for me.

In this latest book, The Case Against Sugar, Taubes lays out a convincing case for sugar as the primary cause of obesity, diabetes, and other degenerative diseases “of civilization.”

Many Taubes critics make a mistake. They take him too literally, quibbling on details while missing the big picture: The way he recommends people eat helps them lose weight. It just works.

When he blames the governmental push against saturated fat and cholesterol for their purported crimes against the heart and waistline, he’s not saying the USDA literally said sugar was fantastic to eat (although bureaucrats did recommend “hard candy, gum drops, sugar, syrup, honey, jam, jelly, marmalade” and other high-sugar foods as good low-fat snack options). He’s saying that the full-throated demonization of fat overshadowed everything else they were saying, and that their advice against eating too much sugar was tepid and ineffectual. The result was that average people focused on avoiding fat and cholesterol. What’s left over after fat and cholesterol and all the wonderful foods that contain both nutrients have been removed from the diet? Carbs. Protein is mostly out because it often comes attached with fat. Even eggs have that little poisonous nucleus lurking inside.

And to make low-fat foods palatable, what do you add? Sugar.

The Case Against Sugar will leave you white-knuckled in frustration at the egregious mistakes (honest or not) the powers-that-be made along the way.

I’m sympathetic to the argument that Taubes has overlooked some other factors. I’d argue that sugar isn’t the only issue, but I’d agree that it’s one of the primary ones. He isn’t setting out to write an MDA post that considers such arcane influences on health as blue light at night, PUFA-laden vegetable oils, and job-related stress. But not everyone needs that. If your grandma reads it on a whim and stops drinking those two Dr. Peppers each day, she’ll probably extend her life. If your dad reads it and becomes an anti-sugar zealot, he’ll probably drop a few notches on the belt and impress his doctor. Maybe they’re losing weight and improving their health for additional reasons other than Taubes lays out in his book. But does it matter if it works?

Taubes even acknowledges the shortcomings of the book and his argument. He relies mainly on animal trials and observational studies of humans because, well, those are all that’s available. The kind of randomized controlled trial on sugar intake he’d like to see performed in humans doesn’t really exist. It arguably can’t exist.

As Dr. Eades explains, it’d take a truly revolutionary team of researchers with a ton of money at their disposal to do the “definitive” (if such a thing exists) study on sugar and obesity/diabetes/etc:

To truly nail this down, scientists would have to randomize people into two groups, the subjects in one of which would be expected to eat 100 pounds of sugar per year, while the subjects in the other group would eat almost no sugar (or a significantly lesser amount). The study would have to last for years to realize a significant outcome. Ethical issues aside, a study like this would be enormously expensive and would be impossible to accurately monitor. It’s one thing to randomize people into a study and have them not eat sugar for a month or six weeks – it’s entirely another to get them to forsake it or gorge on it for six years (or however long it would take for meaningful data to emerge).

Maybe when we hit the Singularity and possess the capability to generate virtual universes indistinguishable from the real thing, we’ll be able to run one of these studies to completion. Probably from an iPhone app.

So when a critic points out that obesity rates have progressed despite average sugar intake dropping, it might be that enough folks are still eating over a hundred pounds. But that’s the average. Some people, like you or me, eat less than a pound of sugar in a year. To hit the national average, that means other people are eating well over a hundred pounds each—and they’re probably the ones getting sick, fat, and diabetic.

As Taubes himself concludes, we don’t know whether sugar is the primary cause of metabolic syndrome, obesity, diabetes, and all the other trappings of civilization. We can’t know for sure. But sugar is a strong candidate. It performs no essential physiological role, and when people do give it up good things happen to their health.

This case against sugar is a strong one, with lots of circumstantial evidence pointing toward it as a major culprit. A jury might not convict. But this isn’t a courtroom. Luckily for the individual, we don’t have to give sugar the benefit of the doubt. We’re allowed to presume guilt.

Go out and grab a copy of the book. It’s a good one that will only improve public health.

Did anyone else read The Case Against Sugar? What did you think?