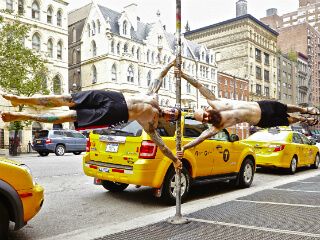 The following guest post from Al Kavadlo & Danny Kavadlo is adapted from their book STREET WORKOUT and is published with permission from Dragon Door Publications. Enjoy!

In the beginning, we crawled. We hunted. We climbed. We played. We did a lot of things. Early man used his arms, legs and entire body every time he pulled himself up a tree to pick fruit or hoisted up a mammoth carcass for the weekly feast. He didn’t isolate body parts when he fought to survive. He didn’t jump or sprint because it was “leg day.” He did it because a saber-toothed tiger was gonna rip him apart if he didn’t.

Fast forward a few millennia and we find mankind erecting the Egyptian Sphinx, Stonehenge and the Great Wall of China. It takes a great deal of raw, physical strength to move mountain-sized boulders, but we had it. There was no isolation there, friends, just the full body working together in harmony. Trust me, these architects were not at the gym doing three sets of ten hammer curls.

The Acropolis. The Great Buddha of Kamakura. The Brooklyn Bridge. Our ancestors didn’t use any modern gym equipment to get in shape for masterfully designing and building these incredible structures. In fact, they built these amazing structures because they understood (from an architectural perspective) that leverage, one of the key principles of progressive bodyweight training, could help create something incredible, whether it’s a majestic pyramid or a sculpted human body.

Training the body without the use of external resistance equipment is known as calisthenics. It has been around since the dawn of humanity. Calisthenics, or bodyweight training, is the oldest and noblest form of exercise.

Pressing, pulling and squatting are hard-wired into our DNA. Way before the invention of the modern gym, using only our bodies for resistance was not just the best way to train…it was the only way. It’s no wonder so many of us get excited, inspired and motivated by this phenomenon! In fact, the modern gym (sometimes called “globo-gym”), with all its fancy, bi-angular lat pull-down machines, shiny cable crossovers and digitized, fake bicycles is a recent invention of the 20th century. Calisthenics is timeless.

That’s not to say that gyms did not previously exist. They did, but not in the modern sense. The very first gyms (or “gymnasia”) of ancient Greece consisted of exclusively bodyweight exercise. The minimalist equipment used, for example, were parallel bars, climbing ropes and running paths. In fact the word “calisthenics” has its roots in Greek and translates approximately to “beautiful strength.” It’s interesting to note that these gyms also taught wisdom, philosophy and linguistics.

In the era in which we grew up, the aforementioned globo-gyms had become the standard. Thank goodness that in the 1980’s New York of our youth, we were too young and too broke to visit them. I guess we were lucky in that when we were kids, minimalism wasn’t a trend; it was our only choice. Our fitness journey started out with push-up and pull-up contests. In fact, the only equipment we owned at the start of our odyssey was a doorframe pull-up bar. Man, we loved that thing!

For many years we’ve observed numerous big box fitness chains opening up all over the place. We even worked at a few of them. (Hey, hey, hey—everybody’s gotta make a living somehow.) But now on a global scale, it appears that fitness culture is returning to its roots. It’s nice to see. The Primal community is a big part of this resurgence, as is a subculture that has simply become known as Street Workout.

We’re born with an urge to be outside. We’re animals, not built to sit under florescent lights in a climate controlled, windowless room. It’s bad enough that so many good people have to do this at their jobs. Let’s not do it during our workouts.

Street Workout taps into so many elements you simply can’t find in the contemporary big box gym. These include the elegant minimalism of bodyweight training, the splendor of the great outdoors and the empowerment of owning a body that’s truly self-made. Not to mention the badass feats of strength associated with extreme calisthenics.

The improvisational element of Street Workout is equally appealing. When you use what the world has provided around you, rather than what you’ve been told to use by the corporate equipment manufacturers, you awaken a creative, even artistic, part of your mind. Whereas commercial gym members use multiple thousand-pound machines to train one muscle at a time, we can look at a pole, fence or street sign and come up with a dozen full-body exercises on the spot. We can even do entire workouts with nothing but the floor beneath our feet.

On a cultural level, Street Workout is revolutionary. The great anthropological equalizer if you will. Our community comes from different backgrounds and origins, assorted borders and parts of the world. We are united for a common cause: a love of fitness, form and function, a passion for self-improvement and a need to inspire others. Young and old, male and female, black and white, gay and straight: we are all represented.

But sociology aside, Street Workout is also the great equalizer of body types. Because calisthenics focuses on your pound-for-pound strength, the big guys and little guys have the same relative resistance: themselves. Allow us to elaborate; a muscular guy who’s 6’ 2” and weighs 250 lbs. will naturally have a higher bench press than an equally muscled individual of 5’6” and 150 lbs. Assuming the same body composition, it’s simply a matter
of physics. The heavier guy can lift more external weight. But if you put them both in a push-up contest, it’s an even playing field. Street Workout is an equal opportunity employer. If your body mass is going up and your reps in push-ups are going down, are you really getting stronger?

By utilizing basic principles of progression such as the manipulation of leverage, adding or removing points of contact and/or increasing the range of motion, you can continue to build new levels of strength without ever having to pick up a weight.

Some people will argue that the pull-up, for example, can only be progressed by adding weight to the body. Though that is one approach, there are many other methods to progress the pull-up. Here are three way ways to increase your pulling power without adding weight or using any equipment beyond the bar itself.

This is an advanced variation that involves keeping one arm straight while relying primarily on the opposite side to do the bulk of the pulling. Begin like you’re performing a very wide pull-up, but bend only one of your arms as you pull your chin over the bar. This means your torso will shift toward that side while the opposite arm stays straight. You’ll need to reach your legs slightly to the side to counterbalance. The hand of your straight arm may need to open and roll over the bar at the top of the range of motion, depending on your wrist mobility.

If you are unable to perform a full archer pull-up, you can allow your secondary arm to bend slightly in order to make the exercise less difficult. Once you get to the top, you can extend the arm fully and attempt a negative archer pull-up. In time, you shouldn’t have to bend the secondary arm at all. 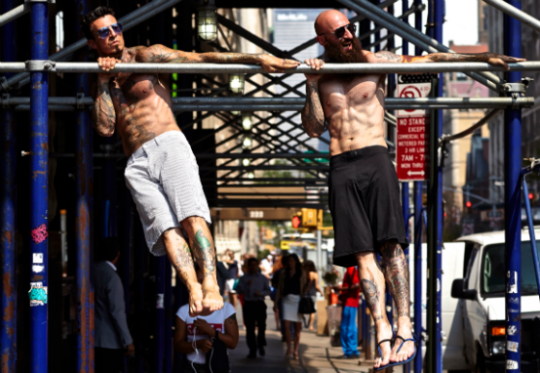 The mighty muscle-up begins like a pull-up, but continues until your entire torso goes up and over the bar. Grip the bar slightly narrower than you would for a pull-up, then lean back and pull the bar down your body as low as possible. At the top of your pull, reach your chest over the bar and extend your arms.

It’s helpful to think about leaning away from the bar during the pulling phase before pitching forward at the top. This creates a movement pattern that’s more of an “S” shape than a straight line, allowing you to better maneuver your body around the bar. 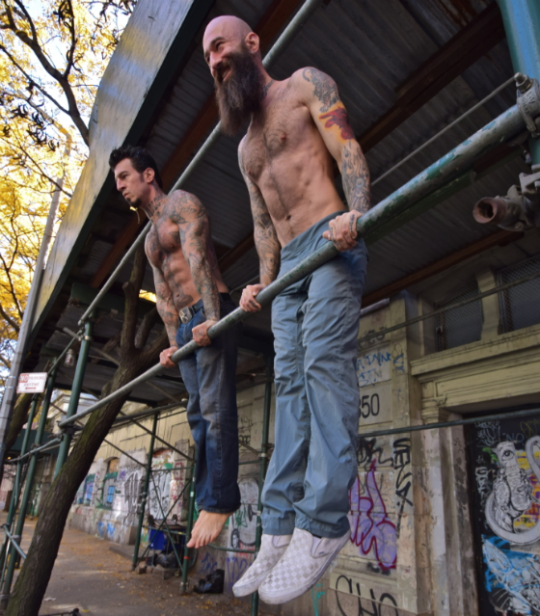 The one arm pull-up is the ultimate in pound-for-pound pulling prowess. It is said that only 1 in 100,000 people will ever perform this exercise, but any able-bodied person who is willing to put in the time and effort can achieve a one arm pull-up in this lifetime.

Due to the lopsided nature of using just one arm to pull yourself, some trunk rotation may be unavoidable when working on the one arm pull-up. Your body will naturally twist as you go up. In the beginning, you should use this to your advantage, and practice turning in toward the bar as you pull. This will cause your grip to rotate from an overhand to an underhand position as you ascend. 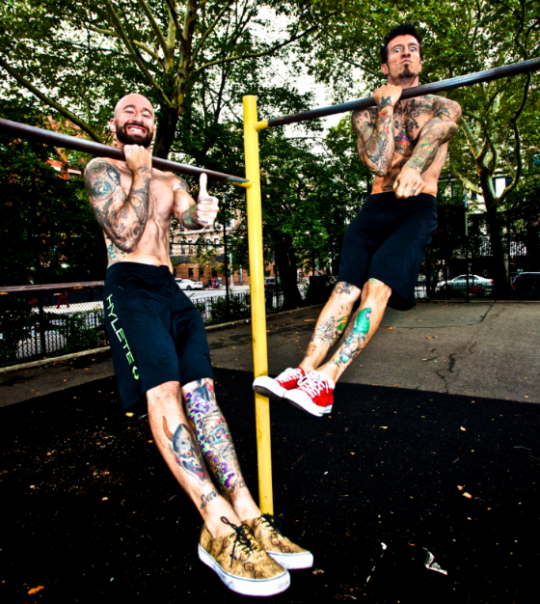 Before you begin working toward a one-arm pull-up, make sure you spend plenty of time getting comfortable with the two arm variety. Focus on getting to the point where you can perform at least 15 clean overhand pull-ups in one set without using momentum. Ideally, you should do closer to 20. This is the foundation for your one arm pull-up. Getting comfortable with archer pull-ups is also very helpful before embarking on the quest for the one arm pull-up.

These examples are just the tip of the iceberg. You can train every muscle in your entire body without relying on external resistance, and every movement pattern in the Street Workout continuum can be progressed or regressed to suit any fitness level. The possibilities of what you can do with just your own bodyweight and your environment are greater than you might have imagined.

If you would like to know more, pick up a copy of our new ebook, Street Workout.