Sometimes 1000 Words Are Better Than Pictures

As you can see by the picture below, I haven’t changed much on the outside since going Primal. However on the inside things have never been better.

I was first introduced to Mark’s Daily Apple around March 1st, 2012, while trying to figure out the rules of a Whole 30 challenge a friend had conned me into. I will admit I found the ancestral health movement silly and arbitrary at the time. I had done a gluten-free challenge before with no results, and it was only selfish vanity and dreams of 6 pack abs that convinced me to try a Whole 30. 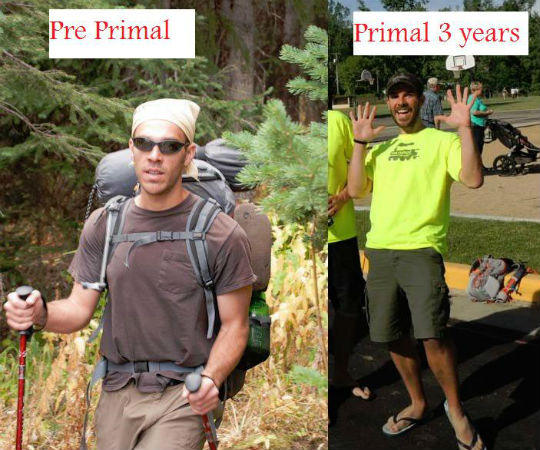 When I first started I had no intention of maintaining the Primal Blueprint diet as a lifestyle, but by the end of my first month I felt so good I realized I could never go back to the SAD way of eating.

Afternoon naps became a thing of the past and energy levels skyrocketed. I learned about the carbohydrate curve and at the end of my 30 days dove into ketosis. As one month became three months, I noticed that my painful cyst and warts had disappeared. This was amazing considering the amount of time I had spent at the doctor’s office trying to get rid of the things. I also noticed that I no longer had periodic breakouts of acne. And, miracle of miracles, the lactose intolerance that I had developed in college turned into a full blown tolerance. It was at this point that I really got into everything Primal. I checked out all the paleo/primal books at the library, started a garden, got some chickens, and really started to dig into the pros and cons of different oils and fats.

Primal was fun! I started cooking Primal group dinners with friends and espousing all the benefits to anyone who would listen. I convinced my mother to go Primal about six months in, and after a year got my dad to join in too. In the last year and a half, my Primal tribe has grown to include aunts, uncles, cousins, friends, and neighbors. As with me, the rest of the family doesn’t appear much different after a year of Primal eating, but I thought I would let them say a few words about their success. 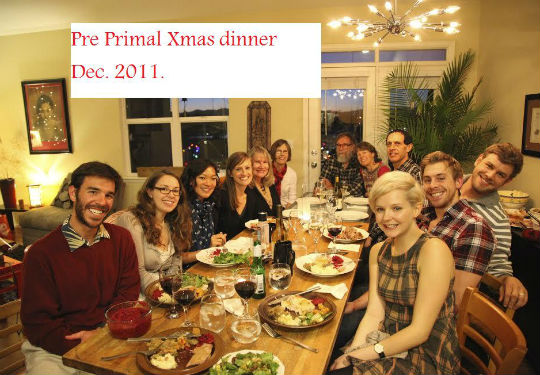 I always thought I knew a lot about nutrition until my son started reading diet and health books that threw into question all the things that I thought I “knew.” I have never been overweight, but I have always tried to eat reasonable amounts of “healthy foods.” I limited my fat, soda and dessert consumption. This all seemed to work fine for me and I didn’t really have health or weight issues other than that I needed to take thyroid hormones to supplement my under-active thyroid. My husband’s dietary habits included lots of sugar, ice cream and cookies if they were available, so I tried to keep those things out of the house. In restaurants he would always have at least three large glasses of root beer, something that always made me cringe. He never seemed to have any health issues either, but he did carry around an extra 20 pounds.

I just turned 60 years old and that feels like a major milestone. I never felt old at all until my early 50’s, after getting a chronic sinus infection and rheumatoid arthritis. The funny thing is that there are still occasions when I feel pretty much like my young self, unaware of pain, stiffness, and strength and agility limitations. Was it the water aerobics and walking that I did with just the right intensity and duration? Was it the laughter, joy and carefree hours I spent socializing with people I enjoy? Or was it what I ate? These are all mysteries to me. None-the-less, I can report a few positive things since I tried a very low carbohydrate, grain and sugar-free diet with lots of saturated fats, at my son’s urging. I felt buzzed. I lost weight immediately (more than I wanted) and found that my thyroid gland suddenly kicked into gear and my thyroid dose became too strong. I naively thought that I would not need thyroid replacement at all but that turned out not to be the case. I also found that my cholesterol levels became quite elevated and I decided that the ultra-low carbohydrate diet was too intense for me. Then, my son challenged my husband to a low carbohydrate, grain-free diet for 30 days along with cessation of his prescription of statins.

I think being overweight is part of our family. My sister, brother and I have been overweight for quite some time. About 18 months ago, Eric challenged me to try a low-carb, high fat “paleo” diet for 30 days. Since I crave sweets, I thought it would be difficult to give up so much that I like, but I accepted the challenge. The pounds seemed to melt off, and I was eating bacon and
eggs for breakfast. I’ve stayed on the diet since then, and am now down to a reasonable weight. 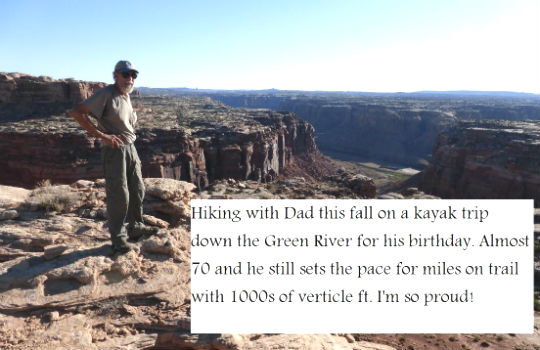 My husband promptly lost about 20 pounds. Unfortunately, his cholesterol levels became so elevated that he decided he would go back on the statins. However, we have both continued with a mostly paleo diet ever since. My husband still has no health issues but continues to take statins. We both sleep well and have good energy levels. My sinus congestion is almost completely gone. I am gradually weaning myself off of the ibuprofen. I keep thinking that my RA is greatly affected by my gut health and I hope that getting off of ibuprofen will help that. Though I am not at risk for diabetes, periodically I test myself with a glucometer and I can clearly see that when I stick with a low-carb, paleo diet (limiting fruit and high carbohydrate vegetables) my blood glucose levels (and triglycerides) stay very low. That in itself is a huge reason for people to eat a low carbohydrate, paleo diet. I also feel more sated having more fat in my diet (though now I don’t include as much saturated fat as I had consumed initially). The last time I checked, my cholesterol levels had gone back down. I believe I’m on the right track now diet-wise, but I continue to seek answers to the mysteries of good health. 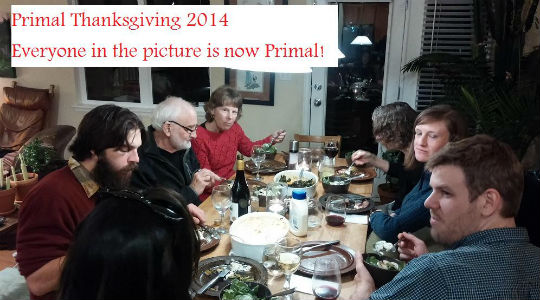 Three years of Primal living has fundamentally changed me. The more in touch I have become with the origins of my food, the more aware and caring I have become of social and and environmental problems in the world. In short, for the first time I feel connected with the rest of the world. I still read MDA every day and have started to implement all the other lifestyle changes like blue blockers, meditation, and movement practices. It is my greatest hope that by being an ambassador of Primal living, I can spread health, happiness, and a care for the environment to others.

Thank you MDA and the Primal community for all your support,