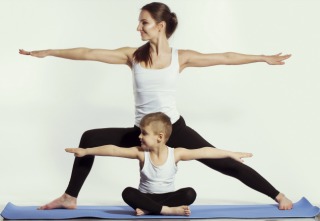 I like intensity when I train. Lifting heavy, running sprints, playing Ultimate Frisbee. I keep it brief, and the foundation is always a lot of slow movement throughout the day—easy runs, long walks or hikes, rarely sitting—but I go hard when I “work out.”

What if you were to go slow, on purpose?

Entire schools of physical culture are founded upon slow, deliberate movements. They squash momentum and lambast rapidity. They’re difficult in a different way. They require patience and fortitude.

Yoga is a loaded word. It’s at once religious practice, spiritual tradition, a way of honing mind, body, and spirit. It’s diet, medicine, meditation. The history of yoga is hard to parse; different sources give different historical timelines. What’s obvious is that there’s no “one yoga.” So, what I’ll talk about is how most of us reading typically conceive of it: Stretching with a spiritual veneer.

This is probably the most common form of slow physical training practiced worldwide. My wife’s done it for decades, and I’ve joined in on more than a few classes with her. It’s not my favorite thing—I don’t seek it out on a regular basis—but it is a great workout, and I always come away in a different headspace than when I started. The benefits of yoga are pretty well-established:

As a series of poses and stretches that test and extend your joints’ range of motions, yoga should improve flexibility. That’s one of its express purposes. Sure enough, in almost every population, it seems to work.

Being slow-paced, deliberate, and controlled makes yoga very effective for older adults (or beginners to physical training) who are unsure of their abilities and want to improve their physical (and mental) faculties.

A 12-week Thai yoga program helped older adults improve their ability across a range of basic physical functions, including back scratching, standing up from chairs, sit and stretch, and the 8 foot up and go test.

Yoga and the Brain

Like most every other physical training methodology ever studied, yoga improves cognitive function. We see this across a range of populations, but especially in older folks at the greatest risk of cognitive dysfunction.

Compared to walking, yoga decreases anxiety, increases well-being, and boosts GABA concentrations in the hypothalamus. This is incredibly cool. Everyone knows that exercise is often the ideal antidote to anxiety and depression. It works, its side effects are beneficial, and it requires no prescription. But this was one of the first studies to show a correlation between increased GABA from physical activity and reduced anxiety levels.

Any type of exercise will reduce stress, as long as you avoid overtraining. Yoga is no different and seems to have particularly potent effects.

After doing a yoga-based guided relaxation, people with baseline elevations in sympathetic nervous system activity—who were already stressed out—saw those level off. Those who weren’t stressed didn’t. This is important because it shows yoga is more of an adaptogen, helping you normalize stress levels only if they need normalizing.

In a group of people awaiting organ transplantations (which has got to be a trying experience), doing laughter yoga (laughter+stretching) improved heart rate variability and mood in both the short and long-term.

Believe it or not, yoga can increase strength. Part of strength, after all, is the ability to get into full range of motion. If you’re strong only through a small range of motion, is that really strength?

Yoga also increases muscular endurance. Again, this isn’t absolute strength, but it’s a component of muscular capacity that enables the expression of strength.

On that topic, Brad Kearns is working on one of our next Primal Publishing online courses, Yoga For Athletes. I’ll have more on that course in the coming months.

Given yoga’s reputation as a “healing art,” many studies have looked into yoga for the treatment of various diseases. Unfortunately, most of the studies have been inconclusive or come up with negative results (doesn’t work, doesn’t hurt), like with schizophrenia, multiple sclerosis, asthma. At the least, it probably won’t hurt, but you shouldn’t rely on it in lieu of real treatment.

It looks promising for a few, though: depression (as an adjunct), breast cancer (not as a cure, but for anxiety, quality of life, and certain symptoms), type 2 diabetes (by improving metabolic health), Parkinson’s (pilot study showing improvements in strength and function)

That said, studies don’t indicate that yoga offers anything above and beyond other types of training for these diseases. Still, there might be more to this picture—at least from an anecdotal perspective.

It goes without saying that anything worth anything carries a bit of risk. Driving to work (or the gym) risks a car accident. Falling in love risks heartbreak. Going into business for yourself risks failure. And training risks injuries.

Yoga is no different. Things happen. You go too far past your joint’s capacity, and pull something, end up sore for weeks. You lose too much water and electrolytes during the hot yoga session, and feel lightheaded on the drive home. You’re swept away by a charismatic yogi, wind up a member of his harem wearing black and white Nikes. We’ve all been there.

Luckily, studies show that yoga is as safe as “usual care” and other types of exercise. There’s quibbling there, to be sure. Yoga is probably safer than free climbing and boxing.

Still, I’d question becoming a “yoga person,” though. I know I probably have several dozen reading right now, and I love you. But don’t assume yoga covers all your physical bases. I’m not fully convinced that yoga is enough for total fitness and optimum strength. A day or two a week on top of some lifting, sprinting? Great. I bet most strength athletes could use a little yoga, even, if they aren’t doing mobility training already.

Yoga has a lot of intangible benefits, too, effects that studies don’t really capture very well.

Historically, yoga was a taught discipline. You didn’t grab a wax tablet of poses and slink off to the jungle to learn yoga by yourself. You sought the tutelage of a master. Things are different now. There are effective and helpful videos explaining how to do specific poses and follow routines. These are extremely helpful, but I don’t think they’re a good replacement for a good teacher.

If you’re dedicated, you can get the same effect watching yoga Youtube videos with your cat, but it’s easy to check out when things get too hard. You might grab your phone to browse Instagram in between poses. You might cut things short because it’s uncomfortable and no one’s counting on you finishing. It’s different than strength training at a home gym because the routines are so uncomfortable and last so long. Mustering the will to do a set of heavy deadlifts is manageable for many. Mustering the will to hold a difficult pose for two minutes is not. A teacher (or class) takes willpower out of the equation. As long you get yourself to class, the rest falls into place.

After today’s post, I hope you’ll consider trying a yoga class. I know I’ll probably join Carrie more often. The literature is compelling and hard to ignore. But in the end, you just have to see for yourself.

I know I have some yoga experts reading this. I know there are many different types of yoga. I’d love to hear from you. What’s your favorite type? Let loose your questions, advice, comments. I’d love to hear your perspective.