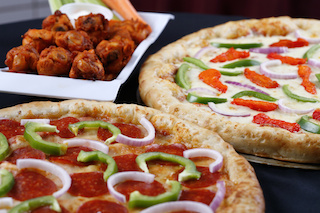 I get a lot of questions about cheat meals. Are they allowed on the Primal Blueprint? Is there a reason someone should actively seek to eat unhealthy food from time to time? The allure of the cheat meal is obvious: you get to eat stuff that’s otherwise off-limits and extremely delicious. You get to throw caution to the wind for a night. It’s like vacation and you’re a food tourist. But are there actual benefits? Today, we’ll take a look.

As I see it, there are three arguments to be made for including periodic — that is, scheduled or preordained — cheat meals in your otherwise solid Primal eating plan.

Some people can stick to their strict diets with metronomic regularity. They have no issues avoiding “those foods” and feel zero compulsion to cheat. That’s me, for the most part. I’ll pick at the odd crusty piece of bread with butter in a restaurant or birthday cake offered to me, but I’ll just as often decline to partake. But not everyone is like that.

For some folks, hewing to the Primal eating plan takes willpower. It’s not so much that you’re constantly fighting off temptation. It’s that sometimes a burger sounds awesome. Sometimes your buddies want to go out for beers and wings or cosmos and gyoza (yep, those are my gender-biased happy hour corollaries and I’m sticking to them) and you’d like to join them. The cheat meal is a great way to take the load off, let loose, and maintain your sanity. It can ensure dietary compliance and there’s even recent evidence that it may make your diet more effective:

Women were placed on a cyclic diet consisting of three phases. For each phase, they reduced calories for 11 days followed by 3 days of ad libitum (i.e. at one’s pleasure) eating. After the three phases, they’d lost an average of 8 kg (about 17 lbs) of pure body fat. This surpassed the amount predicted by calories in, calories out. This study didn’t employ all-out cheat days, but the concept is similar.

The cheat meal is like the deload week in strength training in that it helps the people who need it replenish their will to stay the course and comply with the diet. It’s a break from the monotony, the ardor, the hard work — whatever you want to call it and however you perceive it. It’s like the 80/20 principle, only planned, and it works for the same reasons I included that in the Primal Blueprint.

Just, ya know, don’t take the deload week analogy too literally and make your cheat meal a full-on cheat week.

If you aren’t familiar with the concept of hormesis, it’s simple: what doesn’t kill us makes us stronger. Acute stressors beget resistance to that stressor. Think Wesley in The Princess Bride slowly building up his resistance to iocane powder with gradually increasing microdoses of the poison until he could handle a dose that would kill another man several times over. That was hormesis. Hormesis explains why plant phytonutrients – which are actually just toxins employed by the plant for its defense against pests – exercise, fasting, and even occasional sleep deprivation can be good for us. They all introduce an acute bout of stress that our bodies must fortify themselves against. In the process of fortification, we become stronger, healthier, and more robust.

Okay. A tough workout, some blueberries, a skipped meal or two are one thing. But could a meal of oxidized lipids (heated seed oils) and heat-derived carcinogens (well done meat and fried potatoes) really have beneficial hormetic effects? Maybe.

4-hydroxy-2-nonenal (4-HNE) is a lipid peroxidation toxin spawned by the interaction between reactive oxygen species and omega-6 PUFAs in the body. Large concentrations of 4-HNE and other similar toxins are responsible for tissue damage stemming from ischemic heart attacks, but low concentrations of 4-HNE activate NrF2, the same resistance pathway activated by phytonutrients like blueberry anthocyanin. In the right dose, 4-HNE actually primed cardiac cells to develop resistance against the damaging effects of 4-HNE and increased glutathione synthesis. Mice without the NrF2 gene did not benefit from 4-HNE, showing that hormesis was the lynchpin.

How about carcinogens like the heterocyclic amines formed in smoked, well-done, and processed meats? A team of Japanese researchers studying the effects of low and high-dose carcinogens thinks that “adaptations may be expected to occur in response to low doses of all types of DNA-damaging agents.” (PDF) There’s even some evidence that certain mycotoxins have hormetic effects at low levels in rodent ovarian cells, but that’s not sufficient reason to go out and knowingly consume moldy corn or anything crazy like that.

I’d guess that the hormetic principle applies to many toxins. Well, maybe except for acrylamide. That’s a carcinogen formed during the heating of starches (think French fries) which does not appear to stimulate the hormetic pathway enough to confer beneficial effects.

We don’t have enough to make any prescriptions (things like “a small order of fries will up regulate resistance to cardiac damage while a large order will increase susceptibility”) and I’m not even sure the hormetic principle applies to general cheat meals, but I wouldn’t be surprised.

Protracted calorie restriction in the pursuit of weight loss, whether deliberate (weighing, measuring, counting) or spontaneous (low-carb, focus on nutrient density to promote satiety), can depress metabolic rate and stall weight loss. It is known.

A cheat meal can kickstart the metabolism and keep the weight loss going, not despite the massive influx of calories but because of it. When you eat a big meal, a few good things happen:

Leptin increases. Leptin is a hormone that interacts with the hypothalamus to suppress food intake and increase energy expenditure. It’s reduced by low levels of body fat (body fat actually secretes leptin) and prolonged caloric restriction. So if you’ve lost body fat in the past, stalled, and further reduced food intake to bust the plateau, you’re doing a double whammy on leptin. A big meal, especially if it’s high in carbs and even if it’s a cheat meal, can restore leptin levels so that weight loss can resume.

Thyroid hormone increases. T3, the “active” thyroid hormone, is generally lowered during prolonged calorie restriction. This is normal, and as long as your energy levels are good and weight loss is maintained, a nominally depressed T3 is physiological and expected and nothing to fret over. But extended calorie restriction accompanied by fatigue, malaise, and weight plateaus or gain is a sign of too low a T3. That’s where an acute bout of overfeeding — a cheat meal — can help by restoring your thyroid function to physiological levels.

Before you jump into a regimented cheat meal, keep a few things in mind:

Cheating can be “healthy.” You don’t have to gorge on Hostess cupcakes, McDonald’s fries, and Totino’s Party Pizza for it to be a cheat meal. Maybe you cheat with a ridiculous amount of fresh strawberries in whipped cream and melted dark chocolate. Maybe you cheat with a pound of mashed purple sweet potatoes mixed with cinnamon and coconut oil. Maybe you cheat with a huge batch of homemade fries. Those are all examples of wholesome high-carb meals resembling (and often surpassing in taste) common junk foods that could provide a kickstart to your metabolic rate.

Cheating isn’t cheating if you’re not in a committed relationship with a clean, wholesome diet.

You have to have something to “cheat on.” If you’re already eating fast food five times a week, that cheat meal isn’t a cheat meal anymore. It’s just how you eat. And don’t make the mistake of thinking you’re cheating yourself with that fettucine alfredo. You’re not cheating yourself. You’re not “failing.” You’re just making an informed choice to partake of food that, if consumed chronically, would probably elicit unfavorable metabolic effects.

Try to keep something healthy in there.

Have a spinach salad alongside the gluten-free pizza. Eat a few eggs with your waffles. Going for a burger with bun? Spring for the buffalo burger and make it gluten-free. If you’re going for grains and sugar, avoid seed oils. If you’re gonna get French fries, skip dessert. Get a good whack of protein, too, and avoid gluten, especially if you’re celiac or gluten-sensitive.

If you’re stuck on a weight loss plateau and want off, a cheat meal once a week or so might help. If you feel hemmed in on all sides by too much dietary purity, a cheat meal could even be a good idea. If you wind up hungover just because you tried one of your friend’s French fries last night, a regular cheat meal might be able to cultivate more robustness.

But they aren’t necessary. Don’t think just because you read this on MDA that you “have to have a cheat meal.” It’s just a suggestion. Only do it if it makes sense and helps you stick to an overall healthy, enjoyable way of eating and living.

Let’s hear from you guys. Do you use cheat meals regularly? Have they helped?