I really don’t have too many before pictures, as you can imagine I avoided the camera, not liking the way I looked. I have ever so many after pictures, as now I’ll pose at the first sign of a camera because I like the way I look so much!

My “before” picture (below) was taken in early 2011 at age 59, with my first granddaughter. For most of my life, I had always been slender and fit, being 5’5 1/2″ and weighing around 125. I’d always had normal cholesterol counts and normal blood pressure. Apart from occasional colds, I was in excellent health and didn’t think much about what I ate. 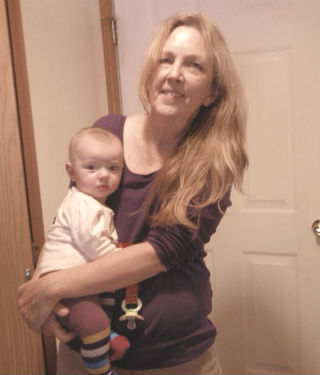 Looking back, things started slowly changing for me in my early 50’s. I was very slowly gaining weight, and gaining it around my waist. I probably only gained about 5 lbs a year, but it was steady, and by the time this picture was taken, I weighed 140 lbs and had started dressing in loose clothing to downplay my increasing waist line. I didn’t like it. I didn’t like the way I looked and the way I felt. I was tired, didn’t feel comfortable with myself and I was frustrated.

I decided to go on a calorie restricted diet and bought processed diet food to have on hand. It was such a bad idea on so many levels! I was constantly hungry, as lethargic as ever and lost only two pounds, which were immediately regained when I was too hungry to stand it anymore, and ate normally. Is this the normal aging process, I wondered? I come from a long lived family and steadily gaining 5 lbs a year for the next 25 years could end up very badly for me!

Unbeknownst to me, my son, in his early thirties, was not happy with his weight and lack of energy. His wife had also had problems with high cholesterol counts since she was a teenager, and was having a hard time controlling it. My son started to do internet searches and came across Mark Sisson’s information on the Primal lifestyle. My son researched it thoroughly and started the diet during the summer of 2011, and when I went to visit him and my daughter-in-law the following October, my son had completed approximately three months of paleo and was wildly enthusiastic about it.

His wife saw her cholesterol levels drop almost to normal. His weight dropped to where it was in high school and his energy level greatly increased. I have to be honest, I didn’t research paleo, I didn’t even know much about it. My son simply instructed me that this was the way I was to eat from now on!

Knowing how much research my son did on anything he engaged in, I immediately got the list from him on how to eat, took it home and got started. The first six months I was off and on, and not entirely committed, but I started losing weight, even though I was never left hungry. Then, I ended up going full paleo. 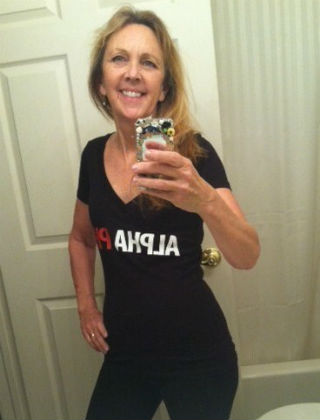 This “after” picture was taken, January 2014. I feel so comfortable with the way I look. I feel like the person I am inside is reflected by my outside appearance. And, interestingly, at my checkup last May, my cholesterol levels remain normal as does my blood pressure, but my weight is 125 (and it’s been stable at 125 for close to a year now) and I’m no longer 5’5 1/2.” I’m now 5’6.1.” No, paleo didn’t make me grow, but with my increased energy level I decided to start taking yoga classes (which I’d always wanted to learn) and evidently I’ve been slumping my whole life, I now stand up straight and have discovered that I’m taller than I’ve always thought I was!

Sidenote – One day at yoga our instructor stopped us and said, “Ladies, don’t think that doing all this exercise will change your body if you continue to eat bad food. That’s all I have to say about that.” But I knew just what she meant, that eating the standard American diet with white flour, white sugar, additives, preservatives, low calorie, high starch foods, devoid of any nutritional value, would (as I had found out before the paleo), leave you hungry and continually gaining weight.

Now, you might ask, do I think I will continue indefinitely with the primal lifestyle? At my last checkup the doctor suggested I be tested for Celiac’s Disease as it runs in my family. Although I’d never been aware of having any symptoms, I tested positive, which means no more gluten containing products, ever. And I’m so okey with that – a disease that makes you unable to eat junk food is not a bad thing! So yes, I’m following the paleo diet and lifestyle and there’s no going back, which I wouldn’t want to do as I feel good, like the way I look and have energy to thoroughly enjoy my beloved granddaughter.