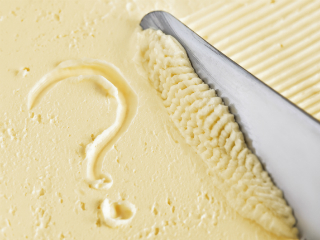 For today’s edition of Dear Mark, I’m answering three questions. The first concerns a recent study seeming to show that saturated fat disrupts our circadian rhythms, especially saturated fat at the wrong time of day. Should we—yet again—trade butter for soybean oil? Second, how necessary are the amino acids found in collagen? Aren’t they found all over the place, not just in collagen? And finally, I answer a couple questions about cutting diets (those traditionally low-fat, low-carb, high-protein diets) and if they can be adapted to a primal way of eating.

It says saturated fats disrupt the circadian rhythm and lead to metabolic dysfunction unless you eat them in the morning. Thoughts?

It’s all scary stuff. It’s enough to make you swear off butter and become a fervent defender of orangutan habitats in palm oil-production zones. Except:

In other words, palmitic acid in the wild is never alone. It always comes with these mitigating fatty acids, like oleic or arachidonic acid.

Now, the recent study you reference may be different. Maybe the circadian-disrupting effect of palmitic acid isn’t offset by oleic acid or any other whole food nutrients. It’s possible. But I doubt it, given the track record.

These petri dish studies aren’t useless, of course. They do provide mechanisms that occur in the real world. The petri dish isolates everything: the object (the cell line), the environment (the dish), the actor (the palmitic acid), the effect. It’s all singular, refined, granulated. But that’s just the one mechanism, unaltered and unbound. Everything changes when you introduce other variables, like, I don’t know, other fatty acids.

Don’t throw this one out. Integrate it. Maybe it’d be cool to try eating most of your fat earlier in the day. Maybe you’ll sleep better. Maybe eating some sardines (a good source of DHA, the PUFA the scientists discovered did not impair circadian rhythm) alongside your saturated fat is a good idea. Maybe don’t use that Just don’t forget that scientists use these specific nutrients in isolated unrealistic conditions to study an isolated mechanism. They’re not saying you can’t eat butter anymore.

And if they are, they’re wrong.

I have taught a little bio cheese and physiology and so I would like to understand something regarding eating collagen.

this doesn’t make sense to me.

First of all, I would love to learn about bio cheese. Sounds delicious.

Second, it’s true that glycine can be found in other protein sources. But collagen is concentrated in only some of them. It’s a supplement that replaces a missing yet vital element of the traditional human diet: skin, bones, and connective tissue. If you look at the top sources of glycine, they’re mostly all odd bits of the animal. Lungs, hocks, skin, ears, and other assorted and delicious oddities. And at the very top is isolated gelatin, which is entirely collagen. You can get glycine from other sources like muscle meat, but it’s not enough and you’ll also be getting a massive dose of methionine, the amino acid that must be balanced with adequate amounts of glycine.

Is it healthier/better to do a low calorie, low fat ketosis diet (eg. popular diets such as the max 500 calorie lean protein, no/low fat, with only a small amount of veggie/fruit), or a more moderate primal diet where you are not necessarily in ketosis?

Does the insulin resistance side effect of ketosis diets make those diets less preferable to a more moderate primal diet which is not dependent on ketosis? IE, is it healthier/wiser to do ‘sweet spot’ weight loss, (as much as the alternative fast weight loss that comes from the ketosis phase might be attractive to some people….)

Those extreme low-fat, low-carb, high-protein diets, also known as protein-sparing modified fasts (PSMF), certainly can work. In the literature, longer term PSMFs are always done under medical supervision with plenty of biomarker monitoring and supplementation. Out of the clinic, they are good short term hacks if done properly. If you’re on your own, the safest way is to alternate them with days of normal eating. Something like 1-2 days on a normal diet followed by a day of PSMF. Repeat. More seasoned dieters can do them for a few days to a week to cut weight quickly, particularly as you approach your goal weight but still have stubborn body fat to shed. Just be careful.

I prefer the standard Primal eating plan, of course. It allows for greater diversity of food and a wider array of nutrients. It’s more sustainable, pleasurable, and, well, normal. But you can always throw in a round or two of PSMF (even a Primal PSMF) for variety and quicker weight loss.

As for insulin resistance from ketosis or very low-carb dieting, it depends.

Insulin resistance is okay as long as you’re not eating carbs and generating lots of insulin. This is physiological insulin resistance, where what little glucose you have is spared for the brain and the rest of your tissues rely on fat and ketones for energy. It’s actually a feature, not a bug.

If you’re wolfing down carbs willy nilly whenever the mood strikes you, you’re not going to be in ketosis but, because of the high-fat intakes, you will be insulin resistant. That’s a recipe for metabolic dysfunction and weight gain. You have to be strategic about combining carbs and ketosis. Eat them around intense workouts that burn a lot of glycogen. If you have glycogen stores to fill, or “glycogen debt,” any carbs you eat will go toward restoring those glycogen stores and won’t interfere with ketone production. It’s pretty cool.

That’s it for today, everyone. Be sure to offer your own experience or expertise down below if you have something that might help today’s questioners. Thanks!