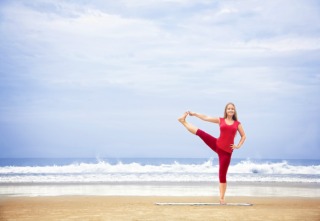 For today’s edition of Dear Mark, I’m answering several rapid fire questions. I’ll be concise and clear. I’ll be quick. First, what can someone do if they can balance on the left leg but not the right? What might be responsible? Second, am I worried about Martha Stewart pounding on turkey breast laid between two pieces of Saran Wrap? Third, what’s different about vaporizing cannabis? Is it better than smoking it?

Great work! Thanks for sharing with us. from last year, i am facing issues with balancing with my right leg. Can you give some suggestion regarding it?

Balance often comes down to one major thing: strength of the lower limbs. In seniors, strength is one of the best predictors of balance and future fall risk, and resistance training is generally better at improving balance than cardio because it both strengthens and balances.

I strongly suspect one leg is stronger than the other.

Makes sense, doesn’t it? Don’t think of balance as emanating from your head. It’s “in” there, too, but it’s also all about the muscles working together to keep you standing. Feel the muscles that fail just before you lose balance. Which was it? Where are you going wrong? Do those same muscles on the other leg falter, too?

Everything’s involved. Think about “grasping” the floor with your bare foot, even if you’re wearing shoes. Give your knee a slight bend and stand tall and erect.

You have to get that leg stronger. It has to catch up. Do some single leg training in addition to two leg training. Reverse lunges (way better than normal walking lunges), single leg deadlifts. Work mobility of the ankles and hips. Build strength in the calves, feet (go barefoot!), quads, hamstrings, “stabilizers.”

Kcup bone broth sounds like more of a sales gimmick than anything else. I agree about the hot liquid passing through plastic not being a great idea. Speaking of plastic, last night on a PBS channel I watched Martha Stewart vigorously pounding out a turkey breast between two sheets of plastic wrap. It undoubtedly keeps the work surface cleaner, but I couldn?t help wondering if microscopic pieces of the plastic wrap were becoming embedded in the meat.

There isn’t any published research I could find on the specific situation, but I’m in the same boat as you. Some of that plastic is likely ending up in the meat, or it’s at least donating an estrogenic compound or two. Despite all that, I’m not going to freak out. I accept plastic as a necessary and unavoidable presence in the world. I won’t seek it out, and I’ll actively choose glass or metal over plastic when possible, but I know it’s out there. We can limit and mitigate it, not avoid it altogether.

Would I use plastic wrap to pound meat? No. I find good wax or butcher paper works just as well without the looming prospect of dietary plastic. But if Martha Stewart is making me flattened turkey, I’m not turning her down just because her turkey has a little plastic residue.

Nothing to worry about for a meal or two. Just don’t make flattened meat a staple (and use wax paper if you can).

What do you think about vaping vs. smoking?

There seem to be real benefits for vapers.

Which appears to be wholly positive but may not be. Some people claim that those “byproducts” are psychoactive?whether by exerting positive physiological effects, reducing negative symptoms, or improving or enhancing the high itself. The two methods certainly produce different subjective effects, so we know something is going on.

I think vaping is probably safer and more cost-effective overall.

That’s it for this week, folks. Take care and let me know what you think down below!

Do you notice a difference in between-leg balance? Are you worried about pounding meat surrounded by plastic wrap? If you partake, do you prefer vaporizing or smoking?