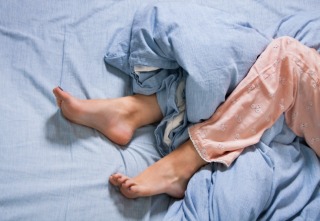 For anyone who’s experienced it, the frustration can be miserable. The countless tossing and turning, the minutes that tick by (turning into hours), and you STILL haven’t gotten a modicum of decent sleep. No matter how hard you try to ignore it, that urge to constantly move or stretch your legs just won’t let up.

Restless legs syndrome (RLS), aka Willis-Ekbom disease, affects a decent chunk of the population: thought estimates vary wildly, this 2017 representative survey places its prevalence between 5.7 and 12.3% of the population. That’s up to around 40 million people in the U.S. alone who go to bed every night knowing they’ll likely be kept awake for hours with that unrelenting, restless sensation.

Dopamine agonists operate under the assumption that RLS is linked to impaired dopamine function in the brain. While they do tend to produce good results in the short term, even at low doses they’re also notorious for augmentation, a scenario in which RLS symptoms actually worsen from taking the drug. They’re also commonly associated with an increased risk of impulse control disorders, like pathologic gambling, compulsive eating, and compulsive shopping. Not ideal.

Other common first-line treatments include alpha-2-delta calcium channel ligands, and in some cases, opioids. Alpha-2-delta ligands are often effective in treating RLS that occurs in tandem with painful peripheral neuropathy, certain forms of chronic pain, and even Parkinson’s disease; however, they’re also linked to depression and suicidal tendencies. Also not ideal. And then there are opioids. Whether they’re a viable treatment for RLS or not, they may undoubtedly introduce more problematic side effects and addictions than they’re worth for many people.

Magnesium, which most of us are seriously lacking, interacts with calcium in the body to help regulate the nerves and muscles. When serum magnesium levels are low, nerve cells become overactive and can get a bit trigger happy in sending messages to our muscles. The result is constant muscle contraction, which explains many of the symptoms of restless legs syndrome.

In a small study involving patients with mild to moderate RLS, oral magnesium every evening for 4 to 6 weeks improved symptoms in all patients. Another study involving a pregnant woman given intravenous magnesium sulfate for 2 days indicated complete recovery from RLS symptoms. Magnesium is considered “investigational”  by a larger review study, but research is scant.

Unlike magnesium, the link between iron deficiency and RLS has received plenty of attention in the literature. This 2007 study showed that RLS sufferers with low serum ferritin were more likely to experience an iron deficiency in the central nervous system. This, in turn, impedes dopamine signaling, the result of which is greater risk of RLS. A 2013 study verified these findings by using MRI to show that RLS sufferers have significantly lower iron content within several areas of the brain.

Considering the importance of iron for healthy dopamine signaling, the results make sense. And several studies have shown that RLS patients with low serum ferritin (generally less than 75 mcg/L) have responded well to both oral and intravenous iron.

Like iron, vitamin D appears to play a key role in dopamine synthesis and metabolism, meaning those who are deficient are more likely to experience RLS symptoms. A 2014 study showed that presence of RLS was significantly higher in vitamin D-deficient patients, while a 2015 study found that certain variations in the vitamin D3 receptor gene were associated with an increased risk of RLS.

Luckily, vitamin D treatment is a fairly straightforward affair, and it seems to yield good results for those dealing with RLS. One recent study showed that vitamin D3 treatment (oral or intravenous) in those who were deficient was able to improve symptoms from a median RLS severity score of 26 down to 10. While this impressive result hasn’t necessarily been reflected across the board, it suggests that vitamin D supplementation is worth a shot if you suffer from RLS. For most people (particularly in winter), it’s worth upping your vitamin D levels whether you’ve got RLS or not.

There isn’t a lot of research to support the association between alcohol and RLS, but plenty of anecdotal evidence suggests it’s worth exploring. Alcohol can otherwise lower sleep quality and increase conditions of sleep apnea, which in turn can contribute to worsening of RLS symptoms. In a European study spanning close to 19,000 people, those who drank at least 3 alcoholic beverages a day were more likely to have RLS. Even if that tops your usual imbibing, alcohol probably isn’t helping your restless legs.

SIBO and Other Gut Disorders

Whether you’re low in iron or not, it’s worthwhile considering the link between gut conditions like small intestinal bacterial overgrowth (SIBO) and restless legs syndrome. A 2011 study of 32 RLS subjects found that 69% of RLS sufferers had SIBO, compared to only 28% of healthy controls. As part of the same study, another 28% of RLS subjects had irritable bowel syndrome (IBS) compared with just 4% of controls. A Japanese study of 80 outpatients diagnosed with inflammatory bowel disease (IBD) found that 20% of them also suffered from RLS. In another study involving 272 Crohn’s disease outpatients, RLS prevalence was 30%, and 43% had suffered from RLS at some point in the past. Celiac disease has much the same relationship with RLS, with 1 in 4 celiacs also reporting RLS symptoms.

Conventional treatments for IBS patients have shown dramatic improvements in RLS symptoms, but this generally involves a heady dose of antibiotics. A more Primal-friendly course of action would involve regular use of a good quality probiotic and a low-FODMAP diet until your RLS symptoms improve. Here’s what I use.

It might seem like highlighting the association between RLS and both autoimmune and inflammatory disease states is something of a catch-all, but the fact remains that people with conditions like Parkinson’s disease, Alzheimer’s disease, Celiac disease, MS and rheumatoid arthritis are far more likely to suffer from RLS than healthy individuals. A literature review found that out of 47 RLS-associated conditions, 42 of them had an autoimmune or auto-inflammatory component. Another study published last year also found strong links between patients’ neutrophil-to-lymphocyte ratio, a key marker of systemic inflammation, and RLS.

As far as specific treatments go, this is where things get tricky and individualized. How you approach the problem depends on your inflammatory or immune condition, but improvements can almost always be achieved by adopting an anti-inflammatory, Primal type of diet. You know, one loaded with nutrient-dense, whole foods and relatively devoid of inflammatory foods. Adjusting lifestyle factors to reduce stress and increase movement and sleep will also make a huge difference, but more on that next.

Other Factors For Treating RLS

As far as nonpharmaceutical measures go, one of the most successful RLS treatments is simply to reduce stress. That means, of course, eliminating causes of stress in your life where possible, but healthy practices that ameliorate its impact are a good idea, too.

For example, in a 2012 study, 13 women with moderate to severe RLS were placed on an 8-week self-guided Iyengar yoga program. At the end of the 8 weeks, “participants demonstrated striking reductions in RLS symptoms and symptom severity, with symptoms decreasing to minimal/mild in all but 1 woman and no participant scoring in the severe range by week 8.” Another study published last year combined yoga with aerobic exercise for 12 weeks to see significant improvements in RLS symptoms—to the point where patients were able to reduce their dosages of the RLS drugs they were on.

If yoga isn’t your thing, there’s plenty of other stress-alleviating options. Getting out into nature, using guided meditation, trying an adaptogen supplement (with your doctor’s okay), and even watching a good comedy can all chip away at the stress we feel.

Certain medications have been shown to contribute to higher risk and severity with restless legs syndrome. A literature review of applicable studies found that antidepressants, neuroleptic agents, dopamine-blocking antiemetics, and sedating antihistamines have a strong correlation to incidence and greater severity of RLS, and where possible should be avoided. Obviously, this isn’t always an option, but it’s worth exploring whether a substitution can be made. As always, discuss your concerns with your doctor before discontinuing any medication.

A 12 week trial involving 28 participants showed that aerobic and lower body resistance training produced significant improvements in RLS symptoms across the board. A smaller study found similar results, with aerobic exercise over the course of 16 weeks producing an average reduction in RLS severity of 42%.

Stretching has also been shown to improve RLS symptoms, so consider doing some light leg stretches before bed or when the restless legs hit.

While a trifle inconvenient and decidedly uncomfortable, compression devices show some serious promise in treating RLS. A 2009 study had 35 subjects wearing either a therapeutic compression device or sham device for at least an hour a day for 1 month. After 1 month, the compression group saw significant reductions in RLS symptoms, with an almost 50% reduction in severity. Another study involving 10 RLS patients saw 1 patient pull out of the protocol due to discomfort, but the remaining 9 used a compression device for 1 to 3 months and saw either complete remission of RLS or a marked improvement in symptoms. Obviously, if the need is great, compression devices are worth considering.

Beyond traditional compression accessories, however, more comfortable measures like weighted blankets may offer relief for some people. Those without RLS may find they sleep better with them, too.

An estimated 1 in 5 women experience RLS during pregnancy. And although RLS symptoms usually recede shortly after delivery, it can make sleep more difficult during pregnancy and even pose its own health risks.

Generally speaking, many of the non-pharmacological treatments outlined above are effective in reducing the symptoms of pregnancy-related RLS. It’s always a good idea to get regular blood tests, as low iron levels (a common contributor to RLS) are a common occurrence in pregnant women. Other risk factors for RLS during pregnancy include vitamin D deficiency, impaired calcium metabolism, and a lack of low-impact exercise. Address these factors, and you’re bound to see a difference.

Thanks for reading, folks. For those of you with RLS, what’s worked (and hasn’t worked) for you? Share your thoughts below.

Do You Have Tech Neck, or Nerd Neck? How to Fix Forward Head...