Realizing the Key to Growth: A Marathoner’s Primal Story

Running can be painful. When you are injured – it is even more painful. But despite all this, I love the sense of freedom and movement that running brings. I have lived for over 12 years as an Englishman with my family in a multinational environment in Singapore, and there is plenty of scope to travel. For me, this meant the quest for the next dose of agony – leading me to the start line of a dozen marathons and over 20 half marathons. With much attention on training plans, and even more time spent running laps on the track, I progressed to a reasonable standard three years ago (1:26 half and 3:21 marathon). Still, there were several things that kept holding me back. I found it hard to control my weight (around 70 kg/154 lbs, at 1.73 m or 5′ 8) no matter how far I ran, and I would always break down in training if I tried to run more than 75 km (45 miles) a week. On top of that, running had become even more painful, and this meant it would soon be time to leave it to others – those both younger and less injured. 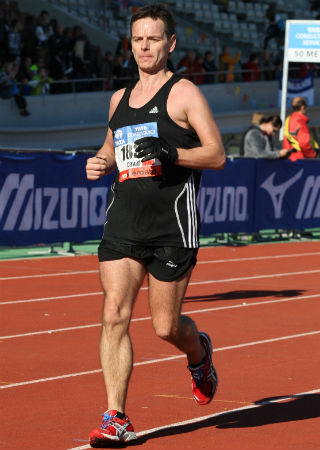 During one of my injured spells, I decided to read The Primal Blueprint (following Gary Taubes’ Why We Get Fat and What to Do About It), and it’s fair to say that the effect was inspirational. Law One (Eat Lots of Plants and Animals) was the first to be applied – I moved to a low-carb, high-fat diet, and also began to consider the interrelationship between food and my training. I made sure I had protein after work-outs and avoided sugary drinks in longer runs (and at any time!) and took electrolytes without sugar/sweeteners instead. I also completely rethought my running plan and tried to complete nearly all of my running with a heart rate below 75% of HRmax (Law 3 Move Frequently at a Slow Pace) – and I only ran higher heart rate sessions on very specific occasions in the build up to a race. I also went to the gym two to three times a week (Law 4 Lift Heavy Things). Against my pain loving nature, I recognised there were other big gains to be taken from sleeping more and playing as much as possible with my kids. Maybe my brain had finally recognised that it was time to avoid making stupid mistakes!

The results were huge and positive. Within weeks my weight fell and stabilised around 65 kg (143 lbs), 5 kg (11 lbs) lighter than before). Over time, my strength increased and I rarely got injured. The consistency of my training and running longer distances at lower heart-rate gave me a much greater base. This base and my strength made me faster too – even though I had rarely completed any speed work. Not surprisingly my times improved, but more surprisingly, the pain started to lift. Running didn’t hurt! Beyond my running, eating had become much more pleasurable (no more bloated feeling!) and family time was even more fun.

For a while, I thought this was the end of the story, until I noticed after a couple of years that I wasn’t improving anymore. I went back to Mark’s Daily Apple to see what I might have missed…and I had missed a lot! Somehow I had overlooked the advice on sprinting completely. This has to be one of the most pleasurable experiences that I had missed out on for over 30 years. Also, I had not considered intermittent fasting – not eating once a week for 24 hours has really made me appreciate my food more. Finally, I decided to try life without regular caffeine and alcohol. These are now just in my life around race time – caffeine right before a race – and alcohol several hours after! 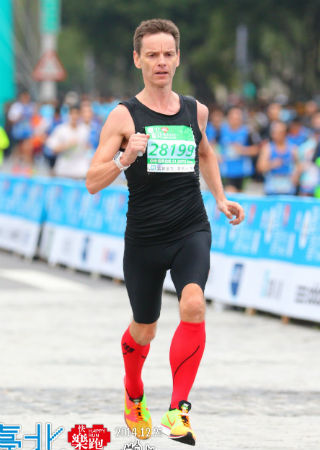 This time the results were significant – but maybe less dramatic. My weight fell further to 62 kg (136 lbs) and my times began to improve rapidly again. My most recent times are 1:22 for a half and 3:05 for a marathon – but it’s nice to think at 45 years old that I have a good chance of running faster times again.

My experiences have shown that there is much to learn from the Primal movement – and almost as much to learn when re-thinking the approach a second time. I am sure there are still plenty more ways to grow when I am ready to accept them. Maybe most importantly, I started to reflect that my running habit and desire to run fast might not be so unhelpful after all – for me these were the key to my attempts to grow.