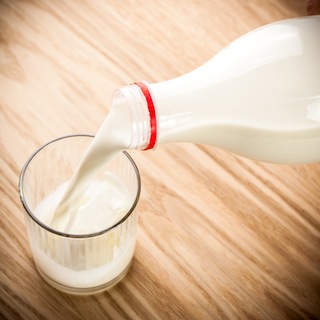 For today’s Dear Mark, I’m responding to as many of the questions and concerns relayed in the comment section of last week’s raw milk post. You guys had a lot of them, ranging from whether raw milk can help with eczema and adult asthma, if homogenization is dangerous, why raw milk might taste and smell fishy, to how many people get sick from pasteurized milk. I also respond to reports of raw milk not being a panacea for immune health, and even an active impediment to it.

Lots of ground is covered today, so let’s get right to it.

The initial hypothesis posited by Dr. Kurt Oster was that homogenization unleashes for full absorption an atherosclerotic enzyme called xanthine oxidase. In the larger non-homogenized milk fat globules, the story went, xanthine oxidase is readily exposed to digestive enzymes and fully broken down into harmless metabolites. Oster said that homogenization places the xanthine oxidase in smaller, more novel milk fat globules called liposomes that protect it from digestion, allowing it to be absorbed intact and get into the blood where it increases oxidative stress and triggers atherosclerosis.

This hypothesis fell apart in 1983 when a researcher showed (among other things) that milk homogenization had never been shown to create liposomes, nor had homogenized milk consumption been shown to increase blood levels of xanthine oxidase.

While I prefer non-homogenized dairy, I’m not convinced homogenized milk is dangerous.

I”m curious…..I had some really good raw milk about a year ago, but then stopped getting it because it had turned “fishy.” Is that because of the cows being grassfed or having grains in their diet?

Probably not. A mutation in the FMO3 gene can cause cows to produce excessive amounts of trimethylamine, or TMA, in their milk. TMA is the compound that got a huge amount of press a couple years back for supposedly causing heart disease in people who eat meat. Gut bacteria can metabolize carnitine from meat into TMA, and this seemed to be elevated in people with heart disease. Fish is probably the richest source of TMA around, and TMA causes the “fishiness” commonly ascribed to fish (and, it seems, your milk).

So that’s probably the cause. I’m not sure there’s anything to worry about it, but it’s not a pleasant sensation and I’d probably stop drinking it, too.

As an adult, I’m struggling with asthma. Does anyone know if there is a supposed beneficial effect (anecdotal or otherwise) for an adult already with asthma drinking raw milk?

There are of course anecdotes from adults with asthma, but the strongest scientific evidence appears to be for early life exposure. The “farm effect,” which has been recreated in animal models, is strongest in utero and early infancy.

For what it’s worth, taking NAC (which increases glutathione synthesis, similar to raw milk) has no effect on adults with asthma, positive or negative. And aerosolized glutathione seems to worsen symptoms and bronchoconstriction in adults with mild asthma.

Maybe try it if you can get a good, clean (tested), trustworthy source of raw milk for a reasonable (one you’re willing to pay) price.

There’s no solid evidence of an association between raw milk consumption and eczema risk in the literature. However, people with skin diseases like eczema tend to have depressed levels of glutathione. If raw milk is increasing glutathione, and low levels of glutathione are causally-related to eczema risk, consuming raw milk during childhood might very well boost a person’s resistance to eczema. But those are a lot of “if”s and there’s no way to say anything definitively.

I wouldn’t be surprised if it conferred resistance when consumed early in life, though.

My sister and I grew up drinking raw milk, probably because it was cheaper, having gone through less processing. My sister was diagnosed with asthma in her teens, and I was always allergic to some grasses and trees. The raw milk didn’t hurt us, but it also wasn’t a magical cure-all for allergies and asthma; it didn’t give us superhuman immune systems and make us impervious to disease.

This is an important point: drinking the purest most grass-feddiest raw milk as a child doesn’t guarantee perfect immune health. Epidemiology suggests that doing so improves a kid’s chances of avoiding asthma and allergies — and there’s a potential mechanism, too — but it’s not reducing it to zero. The studies never say that drinking raw milk eliminates the risk of immune-mediated disease.

A good article – I would be interested in knowing how many people have gotten sick from pasteurized milk.

According to Chris Kresser (and CDC data), from 2000-2007 the United States had “8 outbreaks with 2,214 illnesses, with an average of 277 illnesses per year” associated with pasteurized milk. Based on a 2007 CDC survey which found that 78.5% of the US population drinks pasteurized milk, that’s a 1 in 888,000 chance of getting sick from pasteurized milk.

In the same time period, there were 37 outbreaks and 800 illnesses from raw milk. Since just 3% of the population drinks raw milk (according to the same 2007 survey), that’s a 1 in 94,000 chance of getting sick from raw milk.

An interesting study would be to feed half the calves with pasteurised the other with raw and see if there is a noticeable difference over their lifetime.

Words don’t do the differences justice, though. Check out the blog post for pictures of the two calves’ livers, kidneys, stomachs, testicles, and overall appearances to truly see the difference.

Now, we’re not cows. And those calves were relying entirely on the milk, whereas adult humans drinking raw or pasteurized milk generally aren’t using it as a primary source of calories and nutrients. Humans are drinking a cup here, a cup there, on top of our normal diet. Even if pasteurized milk isn’t a suitable base for a monofood diet, we can get away with using it as a source of additional nutrients because we eat so many other foods.

I bought into the raw dairy hype a few years back and managed to make myself sick as hell with tonsillitis. I should have known better because consuming dairy throughout my youth caused me chronic sinus infections.

Yeah, raw milk is still milk. If you have intrinsic issues with milk, if you’ve developed sinus infections in the past from drinking milk, don’t count on raw milk being different. It may very well help, and you might react better to raw dairy than you do to pasteurized dairy, but don’t “push through” pain, inflammation, and full-on illness just because raw milk is supposed to be good for everyone. It’s not.

Let’s just go through the different types of pasteurization.

Ultra pasteurization involves exposing milk to 280 ºF temperatures for two seconds. This kills all microbes and makes the milk so shelf-stable that it can sit out, unrefrigerated, for months.

You’ll often hear that ultra pasteurizing milk “flattens” the proteins, makes them unavailable to our digestive enzymes, and allows them unfettered access in their intact state to our blood stream via our permeable intestinal lining, thereby increasing allergic reactions and dairy intolerances. This is in contrast to vat pasteurization, which is supposed to be “gentler” on the milk, allowing more beneficial bacteria and helpful enzymes to survive and reach your cup.

The “protein flattening, digestion inhibiting” argument seems to always be attributed to Lee Dexter, a goat farmer and microbiologist. I couldn’t actually find any references in the literature supporting this specific claim, however. And according to some research, the heating of milk can actually reduce allergenicity of milk proteins in people with milk protein allergy. There’s even research suggesting that kids with milk allergy can use baked milk (which they tolerate) to develop widespread tolerance of unheated milk, which is pretty cool. Another study found that ultra high heat treatment of milk made the proteins more digestible, but only immediately after treatment. Storage of ultra pasteurized milk reduces digestibility.

That said, a lot of people report having issues with ultra pasteurized milk. When a friend of mine had to give his two year old daughter ultra pasteurized cow milk because it was the only thing available one night while traveling abroad, she woke up later that night with intense stomach pains lasting several hours. The next day, they found a source of organic, vat-pasteurized cow milk and everything went back to normal. Ironclad peer reviewed science this is not. But it’s hard for a parent to ignore something like that when it happens to their kid. If it works, it works.

I’ve also had vat pasteurized milk from grass-fed, Jersey cows that, to be quite honest, I wasn’t crazy about. It tasted “cooked,” for lack of a better word. The temperature is lower than the other methods, yes, but 30 minutes is a long time to heat milk.

Hi Mark, I’m wondering if making the raw milk into yogurt decreases the risk of pathogens at all? Maybe the good probiotic bugs would kill any bad bugs? Thanks!

To make yogurt, milk must first be heated. That goes for raw milk too. Since raw milk contains live bacteria that already enjoy a strong foothold, it’s difficult for the yogurt bacteria to establish themselves and turn the milk into yogurt. Thus, not just even but especially raw milk is heated to kill any resident bacteria and open up the floor for the inoculation to take place.

If you want to make kefir from raw milk, you don’t need to heat it.

I think that about does it for questions, folks. If you’ve got any further comments or responses to today’s questions, go ahead and leave them down below.