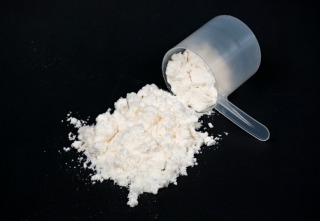 For today’s edition of Dear Mark, I’m answering four reader questions. First, a recent NY Times article makes some scary claims about protein powder—and protein in general. Should you worry? Next, what does a study about probiotics and polyphenol absorption mean for probiotics in general? Third, what do I think about Whole Foods’ new farmed salmon, which purports to be way healthier and more sustainable than other farmed salmons? And finally, I discuss K-cup bone broth.

Article I saw in the NY Times and thought I would pass it along. Curious to hear from Mark the concerns around protein powders. I still take Primal Fuel 4-5 times per week for breakfast and believe in Mark’s company so hoping the quality is better than the rest.

There are a lot of things to unpack from that article.

First, the heavy metal content of protein powder. A few reports have come out in the last half decade about protein powders showing elevated levels of lead, cadmium, mercury, and other metals you don’t really want to consume. The raw ingredients undergo extensive testing for heavy metals and microbial contamination before being released for manufacturing, so you’re safe on that front.

Second, the idea of “excessive protein.” The article repeatedly mentions a “recommended intake” of 46 grams per day for women and 56 grams per day for men, but that’s misleading. Those figures are the bare minimum to avoid gross protein deficiency. They aren’t optimal.

They reference a study in which men aged 50-65 who ate a high protein diet were more likely to die from cancer. That same study also found that in ages 50+, a high protein intake had no association with all-cause mortality (the most important endpoint), while in ages 65+, high protein was downright protective against death. The only consistent positive association across all ages is with death from diabetes.

They characterize protein consumption as oppositional to eating other foods. Protein isn’t a neutral food. It’s “robbing” us of important macronutrients found in fats, grains, fruits, and vegetables. Or something.

Hi Mark, so the probiotic / polyphenol study creates a few questions. Does this mean that all polyphenol rich fermentations like red cabbage kraut, black tea kombucha, or beet kvass are even better sources of polyphenols than we originally thought, or would this just be limited to polyphenol spikes yogurt?

Or should we just aim to take a probiotic capsule with a serving of blueberries? Will you reformulate your primal probiotic based on this idea?

How do you feel about Whole Foods new farm raised salmon discussed in the links below? Is it a reasonably healthy alternative when wild salmon is not available? I find it tastes better than wild salmon (likely because it’s fattier).
https://www.yahoo.com/style/exclusive-whole-foods-now-sells-its-most-163525729.html
https://www.seafoodsource.com/news/foodservice-retail/whole-foods-launches-unique-farmed-salmon-brand

Blue Circle Foods, one of Whole Foods’ partners in the salmon endeavor, explains how the feed is made. They use trim from wild-caught fish like mackerel, capelin, herring, and cod that would otherwise be discarded, rather than whole fish. This makes a more sustainable fish feed with less impact on wild fish stocks.

Wild salmon is definitely ideal. But let’s not act like farmed salmon is useless. It’s higher in omega-6 fats, but still has about 4x as many omega-3s as omega-6. Studies show that eating farmed salmon increases blood levels of DHA, even in pregnant women.

But farmed salmon is a major source of contaminants like PCBS and dioxins, having about 8 times as many PCBs as wild salmon. Since these contaminants are bound to the salmon fat, producers of this new Whole Foods’ salmon feed separate the fish oil from the solids, remove most of the contaminants, and combine it back with the solids to form the fish feed.

My biggest worry is how they remove the contaminants: by heating the oil to 200°C. Now, for more robust oils like EVOO or avocado, that’s okay. They can withstand the heat. And farm-raised salmon actually has a lot of monounsaturated fat and saturated fat, both of which are stable in the presence of heat. But the omega-3s—the fat most people are looking for when they buy salmon—are very susceptible to oxidative damage. It’s unclear how oxidized the feed fats are, and whether it affects the finished product.

Overall, it looks like a good option. Better than other farmed salmon, at least. I haven’t tried it but will keep my eyes open.

What’s the deal with K Cup Bone Broth? Is this stuff for real?
Thanks, Groktimus

The idea of super-hot liquid passing through plastic en route to my open mouth doesn’t appeal to me. Yeah, yeah, it’s probably BPA-free, but what’s replacing the BPA? Plastic tends to contain endocrine disruptors as a rule, no matter how “non-toxic” it is. I prefer to limit my exposure to heated plastic.

Other than that, it’s a fine product. It’s not really bone broth, as the ingredient list indicates that it’s just beef collagen with dried beef and spices, but that’s okay. Collagen is why bone broth is so helpful, so these K cups will provide similar nutrition.

I wonder if it gels up when cooled or reduces down to a viscous pan sauce. Probably not, as they’re probably using a collagen hydrolysate to improve dissolution into hot water. Intact gelatin clumps up when added directly to hot liquid (unless you bloom it first). That would make the bone broth K cups good for drinking but not for cooking.

That’s it for today, folks. Thanks for reading and be sure to help out with your own input down below!