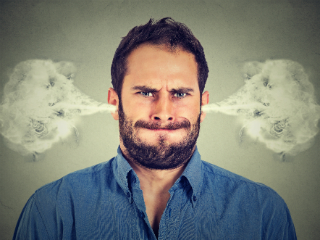 If you ask the average person on the street to list “primal emotions,” I’d venture that anger would be one of the first examples they offer. I think we automatically connect a primal state with anger because anger’s power is more reminiscent of instinct than sentiment. It’s an emotion that can instantaneously engulf our entire being—a red hot feeling that can send all rational thought and genuine self-interest down the toilet in a nanosecond. While other emotions have their physical hold, anger can grip us in a way few others can. Fear, the other primary instinctual emotion, generally lifts with a clear, even euphoric release (as long as its situational, not a product of neuroses). Anger, however, doesn’t die so easily. Like the embers in a fire, it needs ample time to fade. The visceral energy of anger is remarkably durable. We kid ourselves if we think we’re immune to its inherent human force. That said, how can we keep it reined in enough to not thwart our own well-being (not to mention anyone else’s)? How can we control or manage it—even channel it? In short, how can we have and express anger without getting burned by it?

Evolutionarily speaking, anger is the stuff of warfare, murder, revenge and sabotage. And, yet, it’s also the boundary setter. Watch even the most devoted mother dog with her pups, and eventually she’ll offer a snarl if one gets too annoying or if she needs a rest.

At its best, anger is a self-protective instinct. We warn those who would try to mess with us or our kin to back off—and most socially astute, reasonable people (and even many animal predators) will retreat in the majority of situations. Anger, in this way, is part of the “checks and balances” system inherent to our social contracts. Of course, it doesn’t always result in retreat (nor should it). But the feeling and show of anger acts as a deterrent for another person or group, reminding the other party that their own aggression will be met with consequences. It can (or should) give the other party pause to consider whether it’s really worth provoking a particular exchange.

Although violence is undoubtedly part of our primal history, actual pre-agricultural band society would not have experienced the same impetus toward group warfare. Living with an economy of immediacy in which possessions were few and the “spoils” of the hunt were more or less equally shared among members within the moment (rather than stored and hoarded—or stolen—by a few members) offered little reason for large scale conflict. Bands were also relatively fluid with exchange and intermarriage of members at any given time.

That said, it’s inevitable that people broke the egalitarian code at various points or that a certain group encroached on another’s territory. People assuredly fought over mates or the band decisions. Anger at other people, at predators (you killed my son), and even at oneself (boy, that was a dumb move) would’ve been a natural and ingrained response to protecting what a person perceived as rightfully his/hers (e.g. one’s child, an opportunity lost through one’s own stupidity). The larger and more unjust the considered slight, threat or stumble, the more anger would’ve been evoked.

The job of the “selfish gene,” after all, was to preserve and promote one’s own survival and the survival of one’s kin. Even if a relatively small scale, egalitarian social structure often kept conflict from boiling over, the instinct to protect and secure one’s place would’ve called for anger as an impetus for mobilization. In that way, anger is assuredly one of the most directly practical emotions. It has essential purpose and may be, generally speaking, a natural set point (although research has shown some individuals are genetically more prone to direct physical aggression).

Fast forward to modern day, and it can seems like anger is the scourge of human nature. And, yet, I wonder how magnified our anger is by the conditions of our society, many of which are so starkly incongruent with our evolutionary circumstances. Most of us live without the regular threat to life and limb that our ancestors endured, but we live with plenty of other complaints—everything from “minor” daily disturbances to various global injustices.

When we each think of what overstimulates us (e.g. noise, work, other people in our space, exposure to negative news/media), for example, we start to get annoyed, then agitated and finally (if we achieve no sense of relief) angry. Those of us in more densely populated areas may feel this more often.

Add to this, as I’ve talked about many times before, most of us also have much less leisure time than our primal ancestors had. We tend to be overworked on the family (no tribal parenting for us) as well as job fronts. On top of it all, most of us are going on less sleep than we should be. There’s a recipe for anger if I ever heard one.

But even if we feel we can roll with the big layers of our daily life, too often it becomes a case of the straw that broke the camel’s back. Our 7-year-old leaves the gate open, and now we’re chasing the dog around the neighborhood. Our teenager walks in the door an hour after curfew. Our partner forgets to put the gutter extension on after mowing, resulting in a flooded basement during a heavy rainstorm the next day. Our boss completely discounts our contribution to a major project and doesn’t offer what we perceive to be our due credit and raise. Despite our best “serenity now” efforts, anger floods the emotional plain.

How do we deal with anger? What do we do with this naturally occurring emotion when it’s not a matter of survival?

Tips for Managing Anger (So It Doesn’t Manage You):

1. Practice mindfulness, and bring that deep awareness to anger when it rises.

This isn’t about leaving society to live in a monastery or a cliffside somewhere. It’s simply about being cognizant of what you’re feeling and how those feelings unfold in you. To do this, we learn to stop identifying with our feelings and come to observe them instead.

2. Get back in your body while you’re at it.

Use the awareness to feel yourself become flushed in the face. Notice the blood retreat from your extremities. Sense the emotional force rising in our abdomens or pulsating in your forehead. Then breathe into those sensations, disarming each before they take off into uncontrolled rage. With practice, we can nip anger (when we deem it unproductive) in the bud by not trying to manipulate ourselves emotionally but by putting our full focus on physical “symptoms” and addressing those.

3. Make sure what you’re feeling is truly anger.

Sometimes we get in the habit of distorting our emotional responses to avoid feeling what is most uncomfortable and unacceptable to us. Perhaps we won’t let ourselves feel fear, or we’re afraid to plunge into the depths of grief or regret. So, we morph the big feelings into anger, which doesn’t feel as vulnerable. We might think we’re saving face in some imagined way, but we pay for it on the other end by hanging onto an unfelt, unresolved emotion. So take some inventory to make sure your anger isn’t really a proxy for something else.

This might mean saying no to a lot of demands in order to take care of yourself. It might mean getting honest about the effects of your lifestyle choices (e.g. the toll of that hour-long commute) and finding other work or moving. It can mean getting outside more or rediscovering a pastime you love. It can mean getting the sleep you need and taking your allotted vacation. Whatever it is, making sure you’re not burning your candle at both ends can help prevent a blowup.

Modern life can keep us peaceful—or subdued, depending on how you look at it. Some folks do well with this, while others just don’t. Your quick temper might be a sign you’re not getting your thrills from the physical risk and adventure you inherently crave. Anger is a big, bold feeling, but it’s not the best direction for that heightened emotional intensity. Move that energy productively by trying a little intermittent euphoria on for size, and see how much better you are at keeping the peace in the rest of your days.

Thanks for reading, everyone. How have you learned to manage your anger? What role does it play in how you operate day to day?