Primal Performance: How to Stay Cool Under Pressure 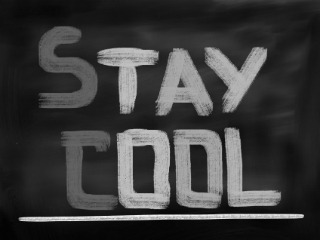 Think for a minute about how many times you felt pressure today—pressure to do something you were nervous to do, pressure to perform in the moment, pressure to make the right choice, pressure to take a big step toward a change or experience you want in your life? What was it like? I find pressure to be an intriguing concept. It certainly feels stressful, but it’s ultimately more than stress. Whereas stress at its core is really just a state of physical and/or emotional strain (generally in response to what we somehow perceive as challenging circumstances), it’s initially a response versus a force (but can become a force when chronic). As a result, stress is most essentially a reaction we can at times avoid or use any range of strategies to minimize or manage. Pressure, on the other hand, is more of an input, a force not just acting in us but on us, influencing and compelling us toward action, much like the concept in physics. The pressure we experience may come from outside expectations or from internal sources (e.g. perfectionism), but the net effect is the same: in one way or another, we’re called to act.

Let me say it a different way. When it comes to stress, the most pressing issue is how we take care of it. When we’re talking about pressure, however, the question is how we will meet it.

Let’s look at some Grok-style Primal examples, shall we?

In response to a circling predator, Grok is pressured to attack or run. Upon seeing that the band’s main water source has dried up as a result of diminished rains, Grok and his group experience pressure to find a new source in the area or to relocate for a time. In response to an aggressive neighboring band, there’s pressure to actively take up the conflict or to carefully negotiate by some means. When a competing suitor challenges him, he feels pressure to either fight or back down. Our good man here undoubtedly feels stress resulting from all of these scenarios, but the pressure itself is to act in some regard. In each case he’s called upon to move, react or perform, and the instinctual stress response works to this advantage—prepares him physically for the output of extraordinary strength or effort, readies his body to address injury or trauma, focuses his senses and thinking for clear-headedness. The stress response is inextricable from facing these survivalist pressures and gives him an advantage.

Our challenges these days undeniably vary from most of Grok’s to degree if not in nature.

Today we’re more likely to experience “performance pressure” in the form of giving a speech or presentation at work, participating in a competition, mastering a skill to perform on demand, making an important financial or professional decision, handling a conflict in our family life or social circles, etc.

But the substance doesn’t matter as much as the structure here. The same overall Primal pattern still holds in these modern “make it or break it” moments. We experience these and other daily or near daily pressures that induce stress and call us to take action. In the face of these pressures we can perceive and even be totally overwhelmed by a natural fight or flight instinct, and yet with practice we can learn to harness that instinct to our advantage.

There’s the saying “grace under pressure,” grace in this context meaning the refinement of movement. Yes, movement. Our power in meeting pressures is how we choose to interact with them. If we accept pressure as a force, we can learn to move with it (rather than cover our heads and be emotionally overtaken and rendered helpless). It’s a similar principle as those you find in martial arts—the observation of and interaction with a force that flows between you and your opponent.

In the original primal times, cool heads not only prevailed, but survived. And that’s what we’re going for here. If Grok seized up when a predator approached and lost himself to inward anxiety, he’d literally be dead meat. Choking wasn’t an option in the Darwinian circus.

So, what was the alternative; the survivalist option? In short, to keenly observe the challenge (in this case, the predator), to move how it moved and to anticipate its likely choices in a given moment with the intent of an appropriate reaction that would foil its attack. Fight or flight at its most successful had a coolheaded strategy—and good timing.

When we want to remain coolheaded in the less insidious challenges of modern life, we can view our circumstances in a similar way—as a game of observation and response.

As you stare down a decidedly non-Primal buffet at a work luncheon, realize that it’s not the actual food that’s the challenger but the onset of cravings or the will to sabotage. When you’re nervous about giving a presentation, discern the challenger not as the speech itself but the out-of-body inner critic that critiques you as you talk. In navigating an argument with a loved one, understand the challenger isn’t the person him/herself but first and foremost a disconnect in communication. Personifying the challenge as challenger shifts it to a dynamic force you can work with rather than a solid, stationary mental object you can’t move, let alone move with.

Envision distance between you and the challenger

Keeping in mind how you’ve correctly identified the real challenger, now picture yourself distanced from it. As far removed as you need to imagine yourself. Give yourself space to observe. The farther you get from it, the smaller it will seem. Again, you’re not taking yourself physically out of the situation (although sometimes that’s a good strategy when stress gets overwhelming). You’re simply learning a discipline of skillful observation. No one can observe anything that’s on top of them or that feels like it’s entangled in their emotional fabric.

Separate yourself in order to put yourself in rational relationship to the challenger. In an argument, visualize the disconnect in communication (and the emotion that results from it) as a separate entity. Imagine what it would look like from 20, 30 feet (or more) away. The sabotaging cravings are now on the other side of the room rather than in your own head. The fear of failure as you begin that first 5K is now on the sidelines behind the fire hydrant. Be with the visualization as long as you need. Carry it with you. And work with a mindfulness practice to sharpen this skill every day.

“Move but don’t move the way fear makes you move”

This is a quote from the Sufi poet, Rumi, but I find it a potent truth that applies to nearly every decision or challenge in health and life if you look at it from the right angle. Now that you’ve distanced yourself from the challenger of a particular situation and given yourself room to think beyond the range of the reptilian brain (what’s generally activated under pressure), you’re ready to act from strategy rather than fear.

When you act from strategy, you’re acting from a place of decision as opposed to reaction. You have options for what will drive the bus so to speak. There’s space to imagine the commonplace advice like “keep an even keel,” “fake it ’til you make it,” “go in confident,” etc. But there’s also no need for pretense when you’re not identifying anymore with emotional strain.

Squarely ask yourself, “How would fear move in this situation,” fear generally being the “cheapest room in the house” (in the words of yet another poet). There’s no need to go write a thesis about it. With practice, you’ll get your answer pretty swiftly. Fear would decide on presentation day that I’d go home sick. Or, if I did show up and do the presentation, I’d focus on myself and my feelings for the entire miserable hour. Fear would believe that I’m not capable of selecting a few mostly Primal options during the buffet luncheon and that I might as well surrender to my reptilian desires. Fear would have me say anything in an argument to protect my fragile ego. Fear would tell me not to expect much from myself in my workout or 5K race.

But what would a non-fear response look like? (It’s easier to identify once you put fear in a corner.) Resist getting too ambitious by calling it the “brave” choice or the “smart” choice or the “confident” choice. Just go for a non-fear choice. Period.

A non-fear choice in an argument accepts that your ego isn’t on the line. In fact, it can sit down and simply listen. It can decide not to decide anything for the moment but to listen now and wait until clarity comes at another time. A non-fear choice can see the possibilities in a buffet or, if need be, can summon the self-attunement to excuse yourself from the event while you find something that will fit the Primal bill and carry you to your next meal. A non-fear choice doesn’t squander energy on self-defeating thoughts while you try a new section of the gym or decide this time to walk around the whole lake for the first time. A non-fear choice decides that it doesn’t matter how well you perform at today’s company softball game and let’s go of assessment because critique doesn’t do anything but disrupt the flow (not to mention the fun).

Discerning your non-fear options in the face of pressure helps to untangle choice from cortisol. It recognizes the Primal fight or flight stress response but removes it from the decision-making process. You might still feel the heightened energy, but you’re leaning into it now instead of pulling away from it. The difference, especially with practice, can become a whole new level of Primal power.

Thanks for reading today, everyone. I’m curious how you handle pressure and especially how you apply principles of strategy and mindfulness in more challenging situations. Share your thoughts, and have a great end to your week.