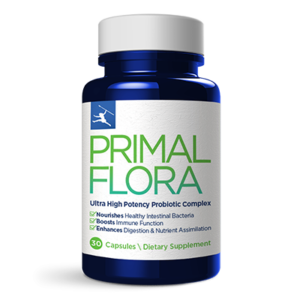 A few weeks ago, I unveiled the new and improved Primal Flora. With four new strains reflecting the latest microbiome research, I’m really happy with the results we’ve had so far. But that’s easy for me to say — I’ve been living and breathing this product for the better part of a year, including months of research, consulting with experts, and personal experimentation, so I know Primal Flora. But not everyone does. And in the comment section of that earlier post, and in emails I’ve received from some of you, many questions arose. Today, I’m going to answer as many as I can.

Great stuff! Thank you. Ordered my monthly supply! When is the best time to take probiotics? With food, without food? A.M., P.M.?

Take probiotics with food or 30 minutes before meals, as they seem to survive the transit through our gut when taken this way (as opposed to after a meal).

If you think about how we’d obtain probiotics before supplements, this makes perfect sense. They’d either be attached to the food in the form of dirt (soil based organisms) or they’d be inherent to the food because of fermentation. Since many of us no longer eat plants we’ve plucked straight from the soil without washing, nor does everyone regularly consume a wide variety of fermented foods, Primal Flora taken with food is a worthy mimetic.

Do you think this product is okay for those avoiding nightshades? Referring to the potato starch ingredient.

Yes. For a couple reasons:

1. Potato starch is just starch. It contains no potato proteins and none of the nightshade alkaloids that sensitive people sometimes must avoid. This is similar to how gluten-free foods can actually contain wheat starch (and in Europe, gluten-free food manufacturers have used wheat starch for years) and still qualify as gluten-free because the residual gluten is so minimal in starch.

For what it’s worth, I’ve sometimes noticed mild joint pain from excessive potato consumption, but neither large doses of raw potato starch (for the resistant starch content) nor the miniscule doses present in Primal Flora have ever given me issues.

Can the Primal formula go bad because of long overseas shipping? Can the bacteria somehow get activated & infect the body with countless diseases?

1. No. Primal Flora is completely shelf-stable, no refrigeration required. Its strains can withstand some fairly harsh conditions, like an intercontinental flight.

2. The strains in PF were chosen not just for efficacy, but also for safety. Unfortunate adverse reactions occur in some people with any supplement. That’s just the nature of consuming pharmacologically active substances, whether it’s a vitamin, a mineral, a drug, or a viable probiotic strain. And if you have an immune deficiency, certain probiotics may be counterproductive and should be cleared with a doctor. Also, these are intended for oral usage. Don’t go rubbing Primal Flora in your eye or anything. That’s a good way to get endophthalamitis. But “countless diseases”? Not likely.

Started taking them 3 weeks ago so I don’t know if I should see results by now. I chose them because there were no histamine increasing strains and even one histamine lowering strain. I can’t swallow pills that big though. I hope that they reach my gut even if I open them because it’s really pricey 1$ USD per pill.

The strains chosen are all hardy and should resist digestion. The veggie caps are there as an extra barrier just for further protection. I’ll occasionally empty a cap or two into my smoothies and I haven’t noticed any reduction of effect. And for those wondering, the capsule is a normal/average size.

Can someone with a trained eye comment on how this compares to Prescript Assist?

The only real similarity Primal Flora shares with Prescrip Assist, beyond being a soil-based probiotic supplement, is the presence of Bacillus subtilis. Everything else is different. From what I’ve gathered, Prescript Assist is a fine product that should complement Primal Flora quite well.

Does anyone know if these can be used for dogs? Our dog had just had a nail ripped off and had to go on 7 days of antibiotics, which I’m bummed about. Thought something like this could help build her gut bacteria back up.

While this isn’t designed with dogs in mind, it probably couldn’t hurt. Most of the strains used in Primal Flora have either also been used in canine probiotic supplements or appear in normal healthy canine guts. Either way, they’re probably safe and potentially quite effective.

In one study, giving Bacillus subtilis to dogs improved the consistency and quality of their poop. Dogs on the B. subtilis had less protein in their poop, indicating better digestion and assimilation of nutrients. It also improved the odor, which isn’t to say that it will make your dog’s poop smell good.

Since dogs have lived with humans for so long, often eating the same food (or leftovers) and living in the same living quarters as us, their ancestral gut biome might be closer to ours than other animals. They carry a lot of Bifidobacterium strains, for example. I’d say give it a shot.

Just wondering if this could be used for kids? I have a 5 year old with recurrent upper respiratory issues, so would be interested in giving it a whirl. Could the capsules be emptied into yoghurt or something to make it easier to give to a child?

This isn’t designed or intended for children, as they’re considered a special class of human with special requirements. I will say this, though:

Kids eat lots of dirt if you let them. It’s kind of what they live to do. Mud pies, dirt clod fights, a stubborn unwillingness to wash their hands before eating — kids intuitively know the importance of dirt ingestion. So while they probably don’t need a supplement if they’re getting plenty of free play out in the dirt, my personal (but not professional) opinion is that it’d probably be okay.

Besides, these aren’t foreign, harmful strains never before encountered or carried by children. In fact:

I don’t think most kids need a probiotic. But if they do take one, Primal Flora should be pretty safe.

I totally agree with you that we need to work on keeping our gut in check. I take DE (diatomaceous earth) on a daily basis to help eliminate the bad parasites as well as all the other benefits you get from it. Will the Primal flora Supplements work ok in conjunction with DE?

Yes. DE has no effect on the strains found in Primal Flora (or any strains, from what I can tell). Go for it.

That’s it for today, everyone. I hope I answered your questions, and if you’ve got an others, feel free to shoot them off down below. Thanks for reading!