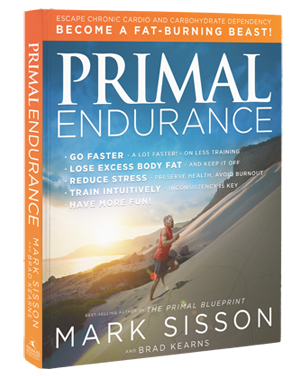 You’ve seen a few enthusiastic messages about the upcoming release of Primal Endurance. Well, I’ve received some exciting news from our new Oxnard warehouse (yep, the company is in the process of moving from Malibu to Oxnard, complete by June, 2016. We needed more space for mayonnaise and salad dressing—seriously!). A couple of pallets of books have arrived early, and we’ve decided to throw together a special promo in case you have some endurance athletes on your Christmas list that deserve a life-changing gift!

Does life changing sound a little presumptuous? Well, I’ll stand my ground here and assert that endurance sports are extremely popular these days, and that the conventional approach is flat out unhealthy and leading to all sorts of breakdown, burnout and attrition in the ranks. Regular readers know that I’ve railed on chronic cardio for nearly a decade, but now I’m pleased to finally be able to present a compelling and thoroughly researched program that in essence says, “Okay, if you insist on doing this wacky stuff, here’s how to do it right—to go faster on less training time, to preserve your health instead of compromise it, and to enjoy your experiences without the pain, suffering and sacrifice that seems to be the essence of the endurance scene.

If you—or someone on your Christmas list—is into the scene a lot (as in Ironman or ultramarathon endeavors) or even just a little (as in joining a group training club to run your first 13.1-mile event, or bicycle a metric century), this book is a necessity to support (instead of compromise) your health and allow your endeavors to bring you joy and vitality instead of become an unbalanced obsession.

Here is the offer—and it’s limited to what little advance inventory we’ve received, so act immediately if you are interested: Order a copy of Primal Endurance and we’ll throw in a free physical copy of the Primal Blueprint 90-Day Journal ($22.95 value—a perfect companion guide since many book topics relate to the journal format). We’ll ship your order free anywhere in the continental USA, and I’ll sign any copies of Primal Endurance you purchase. This special offer expires on December 12, 2015, so we can make sure to get you your copies before Christmas.

Although this book has been in development for much longer than we thought (it also came out to be much longer than planned!), the timing is wonderful because the, ahem, slightly stubborn and all-knowing endurance community seems to be having a bit of an awakening as of late. First, more and more science is revealing cardiac risk factors associated with serious endurance training. This Outside magazine article, “Cycling to Extremes,” should be required, and disturbing, reading for any longtime endurance enthusiast. Dr. James O’Keefe’s TED Talk, “Run For Your Life! At a comfortable pace and not too far”, offers a great primer on how moderate endurance exercise is super-healthy, but quickly becomes unhealthy as you extend beyond moderate into chronic patterns. Here I could say, “told ‘ya so in 2007,” but I’m just glad for the message to become more popular in recent times.

Secondly, low-carb and ketogenic endurance training is starting to garner more attention. Elite performers like triathlon world champion Sami Inkinen and elite ultrarunners Timothy Olson and Zach Bitter have delivered phenomenal fat-adapted endurance performances. Low carb endurance pioneers Dr. Stephen Phinney and Dr. Jeff Volek (authors of The Art and Science of Low Carbohydrate Performance), have substantiated the anecdotal evidence from elite and casual athletes alike in the laboratory, with the 2015 FASTER study turning endurance exercise physiology on its ear. Dr. Timothy Noakes, from his perch as one of, if not the, leading endurance exercise physiologist in the world for decades, has also made a marvelous effort to validate the necessary shift in conscience to the fat burning beast paradigm. Check out my podcast interview with him.

Read an excerpt of Primal Endurance:

These recent doings have shattered the underpinnings of the carbohydrate paradigm that endurance athletes have been myopically trapped in for decades. Now, it’s apparent that you can perform magnificent endurance feats in a healthy manner, with less oxidative damage and inflammation, when you operate as a primal-aligned fat burning beast then when you operate in the gel slurping, Gatorade chugging, pasta chowing carbohydrate paradigm. Furthermore, instead of being confounded by having excess body fat despite 10, 15, or 20 hours of weekly training volume, you can, in a few short months, slip into something more comfortable when you become fat adapted.

It is my sincere hope that this book does nothing less than revolutionize the conventional approach to endurance training, just as the primal/paleo movement has revolutionized conventional wisdom about healthy eating, healthy living, weight loss and more. Why not be one of the first people to embrace the Primal Endurance movement, and chart your progress with the most comprehensive and thoughtful training journal you will find anywhere? Thanks for your interest and I wish you the best this holiday season! 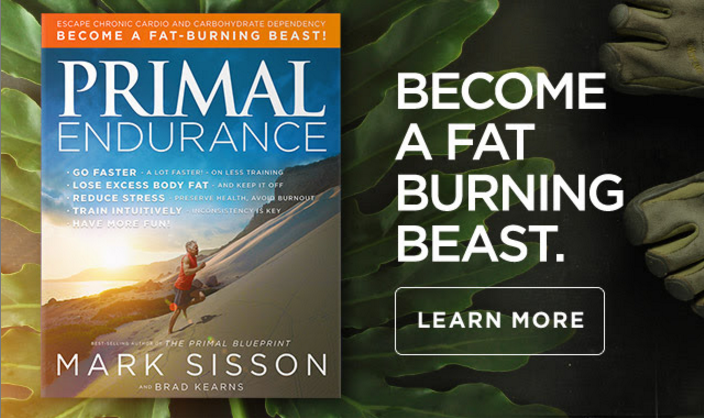