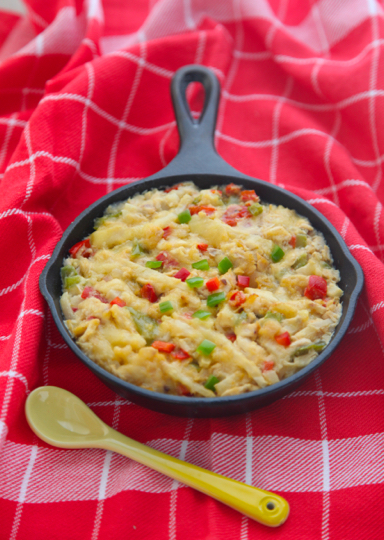 Chicken spaghetti is comfort food at its best and worst. It has that comforting casserole flavor that’s mild, but not bland, and a creamy, baked texture. But that’s where the goodness stops. Layers of spaghetti noodles, canned cream of mushroom soup and gooey cheese make chicken spaghetti a meal to be avoided at all costs.

But what if chicken spaghetti could be remade into a healthy casserole that tastes really similar the traditional recipe? In the case of chicken spaghetti, this means the casserole should be creamy but not taste like coconut milk, and have the texture of noodles without tasting like (spaghetti) squash. Both of these things can be achieved by using celery root.

Must cheese be forsaken entirely? It’s hard to imagine chicken spaghetti without it. If you don’t do dairy at all, then yeah, you can leave it out. But if you don’t mind a little bit of unpasteurized, aged cheddar, then this dish will taste better for it.

Time in the Kitchen: 1 hour

Use a paring knife to trim the skin off each of the celery roots. Cut the roots into sheets 1/4-inch (6 mm) thick, trimming the sides to make squares or rectangles (keep the scraps). Then cut the sheets into noodles that are ¼” (6 mm) wide. 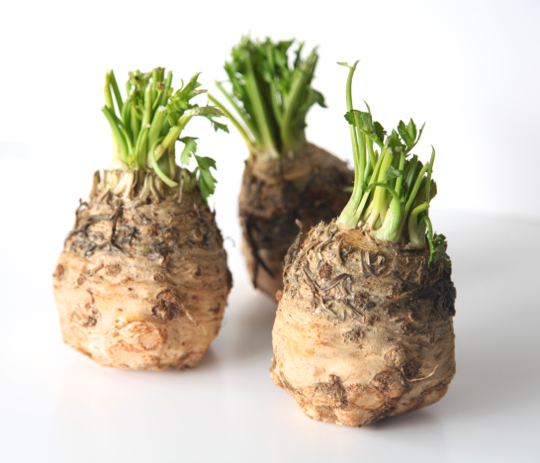 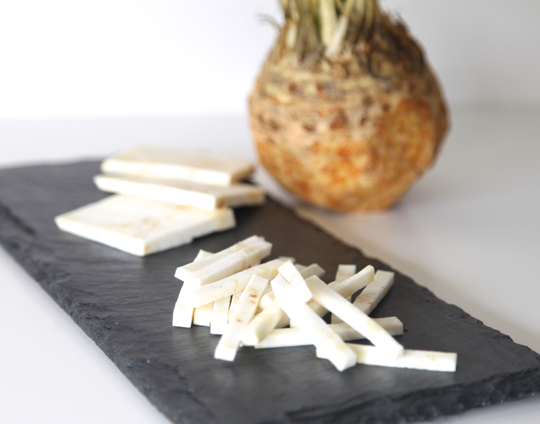 Toss the celery root noodles into a pot of boiling water and cook just until fork tender, but not mushy. This should take not much more than 5 minutes. Drain and set aside.

Gather up all the misshapen scraps of celery root that are leftover and cut them into evenly sized pieces, so they’ll cook evenly. Toss the pieces into a pot of boiling water. Cook until very soft, then drain. Put the cooked pieces in the food processor with the chicken broth and 2 tablespoons/30 g of the butter. Puree until very smooth. Add salt to taste. Set aside.

Melt the remaining tablespoon of the butter in a skillet over medium heat. Add the onion and saute until soft, about 5 minutes. Add the bell peppers and sauté a few minutes more.

In a large bowl, combine the cooked chicken, celery root noodles, onion and bell peppers, cheddar cheese, cayenne and salt. Gently stir in the celery root puree (hopefully you have close to 1 cup of puree). Add more salt as needed, so the dish has ample flavor.

Smooth the mixture out into an 8×8 square (2L/2 quart) baking dish. If you like, sprinkle another ½ cup/45 g grated cheese on top.

Bake uncovered for 30 minutes until warm and bubbly. 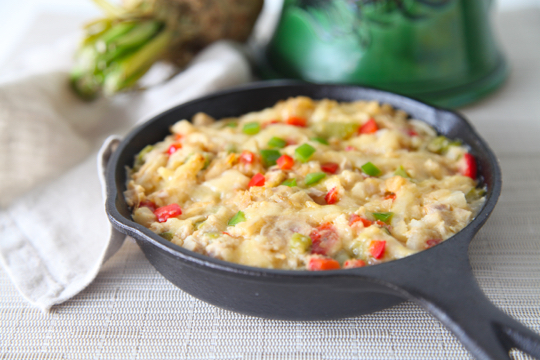