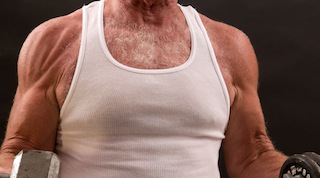 For today’s edition of Dear Mark, we’ve got three questions and three answers. First up is a question from Casey, whose father is losing strength and muscle despite maintaining an active lifestyle. What can he do — dietarily and otherwise — to staunch and reverse the losses? Next, Australian cattle farmers are increasingly turning to sprouted grain as a replacement for standard grain feed. How does it compare to pasture feeding? Are there nutritional differences between sprouted and regular grain fodder? And finally, what do we make of the recent study showing negative effects in cyclists who ate a high-pistachio diet for two weeks? Should we rethink our stance on pistachios — and nuts in general?

My father (64, fairly lean, very healthy given his diet) mentioned to me yesterday that he feels like he’s losing muscle and strength. He mostly follows what you recommend for exercise with lots of slow movement every day, but also mild strength training every day am/pm for work, so that’s non-negotiable. I looked, but had trouble finding much information about muscle loss from you and was wondering if you could write about it a little further. Thank you!!

Protein is key, and becomes even more vital the older a person gets. The protein RDA simply does not suffice for older people, who lose thigh muscle mass and exhibit lower urinary nitrogen excretion when given the standard 0.8 g protein/kg bodyweight. They’re just less efficient at processing, metabolizing, and turning protein into muscle. More recent studies indicate that a baseline intake of 1.0-1.3 g protein/kg bodyweight or 0.5-0.6 g protein/lb bodyweight is more suitable for the healthy and frail elderly to ensure nitrogen balance.

He sounds pretty active, too, and that will increase the amount of protein he needs. I wouldn’t expect massive gains or anything. But moderate gains, especially in strength, and putting a stop to the loss of muscle is extremely realistic — and important for a healthy rest of life. Evidence suggests that increasing protein can both improve physical performance without necessarily increasing muscle mass and, if you’re into that sort of thing, increase muscle mass when paired with extended resistance training in the elderly.

Look at overall calorie intake, too. Low-calorie diets often lead to muscle and strength loss even when protein is high. If he’s active all day long, he just needs more food — not just protein. Make sure he’s consuming adequate calories to ensure weight maintenance. He shouldn’t be losing weight, unless it’s excess body fat which it doesn’t sound like he even has. In the elderly, weight loss tends to portend ill health. He needn’t fear a moderate amount of carbs, either. Since he’s lean, he can get away with healthy Primal carb sources like potatoes, sweet potatoes, winter squash, fruit, and even rice on occasion.

This is a longshot and it may be a little controversial, but testosterone replacement therapy is a viable (and totally understandable/justifiable) option for older men with waning strength, muscle loss, lower libido, and other symptoms of low testosterone levels. He’d have to talk to his doctor about that, of course. I suggest he considers pursuing it if increased protein doesn’t do the trick and he’s not satisfied with his quality of life.

Also, he might consider a day or two a week of less mild, more intense strength training.

I’m from Australia, I recently became a certified primal expert. I recently met a sheep and goat farmer from the Toowoomba region where I live and he was telling me about how he uses hydroponically grown sprouted barley as fodder for his livestock. Have you done any research on this method of feeding? How does this method of feeding stack up compared to grass feeding? I tried doing a bit of digging about sprouted barley as fodder but I couldn’t find anything that compared it to pasture feeding. I love your work and I hope one day I can attend PrimalCon or any other Primal/Paleo convention and have the opportunity to meet you in person. Thank you so much, you have enhanced my life

Luke, glad to have you aboard the cert program!

Pasture is generally superior to everything. That’s pretty much a given at this point. Sprouted grains are more grass-like than their seed-like un-sprouted counterparts, as a recent review concludes (PDF):

Plus, from my research, the Australian farmers (the pioneers in sprouted barley as fodder) using sprouted barley are doing it in the offseason when natural pasture is less available. They’re generally not using it to replace fresh grass, but to replace regular old grain feed. This is a big win in my book, and I’d love to try some sprouted barley-fed lamb and goat meat. Make sure that the animals are also receiving fresh pasture when available in addition to the sprouted barley. Let me know how it is!

Since you are always up to date on the research, I was surprised to see the omission of a recent study on pistachios and leaky gut in your discussion on nuts today:

Although the authors try to make the case that the increased intestinal permeability seen during exercise was the result of chronic pistachio ingestion, it isn’t clear based on their experimental design that it wasn’t an acute interaction between the pistachios and exercise. Either way, this is one of the best in vivo studies we have to date showing how foods can increase the permeability of the intestine and have negative cellular consequences.

This is an interesting paper. Thanks for sending it. If you guys want to read it yourselves, the full text is available in the link Eric provides, but here’s how it went down:

Trained cyclists were split into two groups. One group ate 3 ounces of pistachios every day for 2 weeks. The other group did not.

After two weeks, everyone showed up to the lab for a 75 km time trial on the stationary bike. The pistachio group ate another 3 ounces of pistachios before and during the trial. The other group drank only water. Both groups fasted overnight.

Time trial performance was 4.8% slower in the pistachio group.

The pistachio group showed elevated plasma levels of raffinose (a type of pistachio fiber), sucrose, and certain markers of oxidative stress. Both groups experienced exercise-induced leaky gut, as exercise leads to acute increases in intestinal permeability as a general rule. So it wasn’t the pistachios causing the leaky gut, although the pistachio group had unique stuff pass through the gut into the blood.

Okay, so what’s going on? Are pistachios bad for you?

They appeared to simply add the pistachios on top of their regular diet without replacing any calories. According to three-day meal records, pistachio eaters routinely ate 35% more calories than the no-pistachio group. 3 ounces of pistachios is 477 calories, or an extra medium-sized meal — comprised entirely of nuts.

One of the elevated markers of oxidative stress was 9,10-DiHOME. 9,10-DiHOME is a toxic metabolite of linoleic acid oxidation. In cell culture studies, 9,10-DiHOME causes mitochondrial dysfunction and increased oxidative stress to cells. It alters the inner membrane stability in mitochondria and increases the release of a protein involved in cell death. The pistachio eaters’ elevated post-exercise levels of lysolipids — lipids that form the mitochondrial membrane — may indicate 9,10-DiHOME-mediated disruption of the membranes. If the power plants of our cells and, ultimately, muscles, aren’t working well, our physical performance will be compromised.

Another marker of PUFA oxidation — azelaic acid — was also increased in the pistachio group.

So, are pistachios, and any other nut with moderate to high levels of linoleic acid, bad? At first glance, it certainly seems like it.

But consider that the pistachio eaters were also eating 35% more calories than the non-pistachio eaters. In other words, they were in a state of energy excess. And when linoleic acid contributes to caloric excess — when you start eating a half cup of pistachios on top of your normal diet without changing anything else — problems may arise. The toxin 9,10-DiHOME increases, potentially enough to start disrupting mitochondrial function. Markers of PUFA oxidation and subclinical atherosclerosis rise. That may have been what happened to the pistachio-eating cyclists, who ate 22 grams of linoleic acid to the water-drinkers’ 9 grams on top of their already-high calorie intake.

I suspect as long as you’re hypocaloric or eucaloric, linoleic acid from healthy sources won’t be a problem.

In the end, this study isn’t about pistachio-induced leaky gut. The leaky gut happened irrespective of pistachio intake. But it does reinforce the advice I always give to people wondering about nuts:

Nuts are snacks. Don’t make meals out of them.

Nuts aren’t “free calories.” If you can’t account for your nut intake by reducing food intake elsewhere, you shouldn’t be eating them.

That eating some nuts is good doesn’t imply eating more is better. It’s safe to assume that, like many things in life, nuts have an upside-down U-shaped dose-response curve. Where the peak of the U lies is up in the air, but it’s probably not at nearly 500 calories of pistachios every single day.

That’s it for this week, folks. Thanks for reading and be sure to chime in with your input down below!